Yannetti: “We filled a lot of needs in terms of the way the game is played” 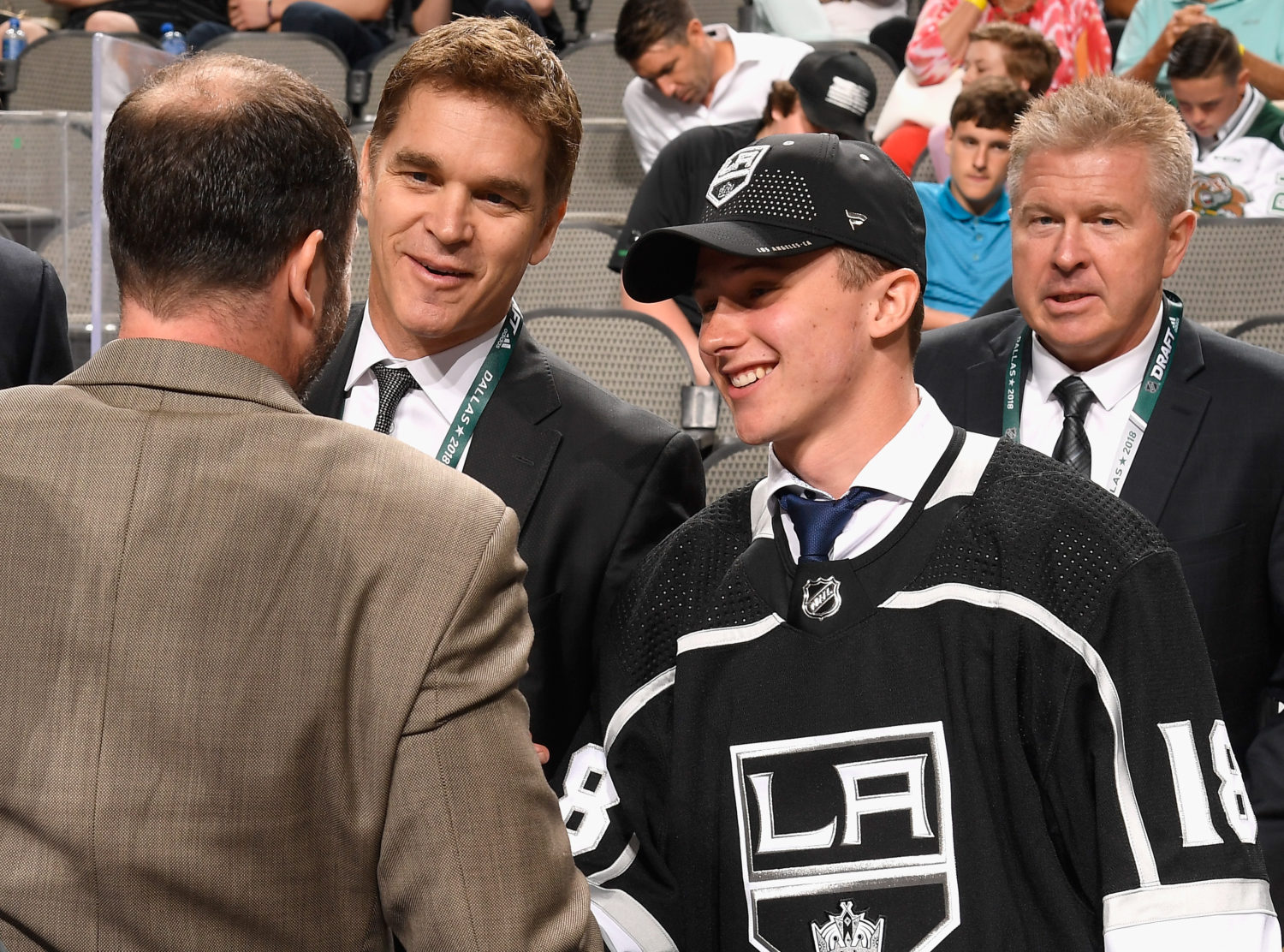 Mark Yannetti, on Akil Thomas:
He’s a higher … creative guy. He played on a solid team but not a great team but not a great team where he was forced into doing a whole lot more work … He’s a good skater, like a really good skater. He’s not in the elite mold like a Kupari, he’s a next-level back in terms of skating. He’s really versatile in terms of the way he can create offense. He’s got individual skill where he’s able to create space for himself and beat players one-on-one, but he’s also got the vision where he can pull back up, where he can show some subtlety and use more creatively to enhance his linemates. He’s very sound physically at this point. He played a lot of minutes for the Niagara team, probably too many minutes, and at times he was worn down, at times he was tired. As a result, he fell into some inconsistent play this year. As he grows, a lot of that is just simply going to change itself without even any work, and then he has to work a little bit more in terms of his preparation day-to-day to alleviate some of those consistency concerns. But as we’ve seen with this always, maturity fixes 90% of that, and then Glen Murray and Nelson and Mike O’Connell fix the other 10%. It’s something we’ve had some really good success with. Chris Byrne, we might’ve interviewed him for two hours one time and another hour and a half another time. I’m sure it was a whole lot more fun for Chris and me than it was for him. He’s out with some really hard questions and maybe one of our two or three toughest interviews of the year. He was really open and honest. He tried to answer the questions rather than give us the answers we wanted, and when a kid does that, … that makes me more sure that the inconsistencies will be washed right out of his game when he matures.

Yannetti, on whether smaller players getting drafted represents a “trend”:
I don’t know if I’d say it’s a ‘trend,’ it’s more accepted. It’s funny, coming from someone who helped build one of the bigger, heavier teams last time. We’ve never really looked at size. It’s never been a real concern for us. It’s worked out that Dean and Darryl, the style that they wanted to play lent itself to certain types of players, but that being said, I think that shift, I do actually think that’s happened more than a few years ago. I think it’s slowly trickling in probably each and every draft. But I think the acceptance was probably a couple years ago, and now the manifestation of it is starting to happen now. I guess it’s like the hole in the dike. You get one hole, all of a sudden two holes, and then five years later you’ve got a flood. I think it started a little while ago, and I think now you’re starting to see everybody more accepting of it. Then, the fact is it could be this year there’s just a lot of better small players. There’s a couple of factors, but just like everything else in the NHL, Europeans couldn’t play U.S. kids couldn’t play, whatever. Sooner or later everyone realizes that a close-minded way of thinking is probably not the best way to success, and you’re seeing it now with small players.

Yannetti, on Bulat Shafigullin:
I don’t anticipate him coming over in the near future. Without a doubt he’s staying over there next year, without a doubt, and I think that’s a really good thing for him. You hear all these different philosophies. ‘We’ve got to get these kids over here. We’ve got to get these kids in North America. We’ve got to get control of the kids.’ The KHL is a really, really good league. The VHL is a really, really good league. The MHL is a good league. They’re leagues that lead with speed and skill. They’re leagues that lead with open play, because that leads itself to creativity. So, you see a lot of fear in stuff like that, and rightfully so. You don’t have control of them. But those leagues are really good. I don’t know that you can be worried about a Russian staying over there. It certainly didn’t hurt Tarasenko, it certainly didn’t hurt Kuznetzov. We could go down the list. I’m not saying that’s who Shafigulin is. I’m just saying that the creative skill-based players seem to do very well over there, and you know what? Yeah, there’s a risk … there’s some risk, and it’s a little scary, but in terms of his development, I have no qualms about him playing at any one of those three leagues next year, and that’s the thought process. A minimum of one year over there, and like anything else, you evaluate. You make a decision right now about a person’s future four years from now? It’s going to change in six months. So, we have various plans, probably like a family tree. We’ve got one line that bridges into 15 lines of potential development scenarios for him, a lot of those involve him staying there multiple years, and we go from there. But, the only certain thing is he’s not coming over next year. 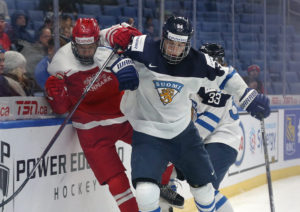 Yannetti, on whether the team filled holes it needed to fill:
Yeah. Were we looking to fill needs? Yes. I don’t think we were looking to fill immediate needs. I think when you look to fill an immediate need, that’s when mistakes happen because your immediate needs are the very definition of the word immediate. It’s today, and that changes. In the NHL, you certainly need to be fast. You certainly need to be skilled. You look at the baseball five-tool players. You need competitiveness, you need hockey sense. We filled a lot of those needs. You look at Kupari. He’s an elite skater. He’s an excellent skill-based player, and his release on his shot is elite. It’s high-level. The ability for him to shoot on the fly is not quite unmatched in this draft, but it’s on the top tier. Then you look at creativity, we’ve got guys like Shafibulin, we’ve got guys like Thomas. We filled a lot of needs in terms of the way the game is played. But in terms of immediate needs, I don’t know how much we can affect immediate need in the draft, anyway. A guy as good as Gabriel Vilardi is, he’s somebody that’s a minimum of one year, and look at how excited everyone is about him. He still hasn’t played. With Rob, when you look at the philosophy that he’s trying to put forth and the structure, we filled the philosophical needs. So, in terms of what his vision is for the future of this team, I think we addressed quite a few of those.

Yannetti, on whether Thomas falling to the second round surprised him:
Were we surprised? How many interviews do I give each year? ‘We never thought he’d drop.’ I’m not surprised anyone falls anymore. If you look at the numbers, there wasn’t a major publication that didn’t have him in the first round. So, my expectations were that he would go in the first round. He didn’t. We’re very happy that he was there. Did he deserve to be a first round pick? Yeah, certainly. But, there’s 10 other guys in the second round that deserved to be first round picks that weren’t, so that’s the reality of the situation. So, was I surprised he was there? No, because every year there are three or four guys that aren’t where they’re supposed to be. Was I happy that he was there? Absolutely.

Yannetti, on drafting goalies with a pair of late picks:
One of the things I learned – and I should say ‘we learned’ – we had the best goaltending depth in the NHL for a number of years. When you could go Jonathan Quick, Jonathan Bernier, Martin Jones, you can’t really get better than that. The age distribution is almost perfect. The goalies were high-level. So, we went a lot of years where if we had chance to draft a goalie, or you had a chance to draft a defenseman, you draft a defenseman. If you had a chance to draft a goalie or a forward, you drafted a forward. If you had a chance to draft a goalie or compete – well, as you can see, our goaltending went from the strongest in the league one year to the weakest depth in the league in one year. In the span of 12 months, we went from in the top five to the every bottom of the league, in my opinion. While I understand the philosophy of what we were doing, it still doesn’t make sense – you always plan for the (what-ifs?) [inaudible] – and we certainly weren’t prepared. And we were very good in terms of getting a Petersen, we were very good in terms of redeveloping a Budaj, reinventing a Budaj. But if you were going to count on things like that, you’re going to leave yourselves really wide open for tragic consequences. Philosophically, I think you need to go into a draft – our age distribution was almost perfect again. Our depth was excellent. We have high-level, all-star level depth in the American league, we have all-star level depth in the NHL, we have a guy like Kehler, he’s a top-tier junior goalie who’s ready to play right away in the East Coast league and challenge for a spot in Ontario. In terms filling the age distribution and talent distribution, we’re where we need to be, and now it’s our job to make sure that we don’t find ourselves in a situation as we were the last three years. Again, I don’t want to get into numbers, I don’t want to get into metrics. We look for value in the draft. We couldn’t afford a goalie in my opinion in the first three rounds. We needed to address skill, we needed to address speed, we needed to address creativity, so when you take the first three rounds out of it and you start looking at the players and the metrics, I thought the best value was the kid we took in the fifth round, and then once again, we weren’t expecting to take another goalie, but when you look at everything, when you look at the subjective part of it and the objective numbers part of it, at that pick, we saw real value in terms of what you were getting in the sixth round and how it usually fits. So, again, we’re not going to be afraid to pick two goalies from here on out. We’re going to try to set ourselves up to take one. 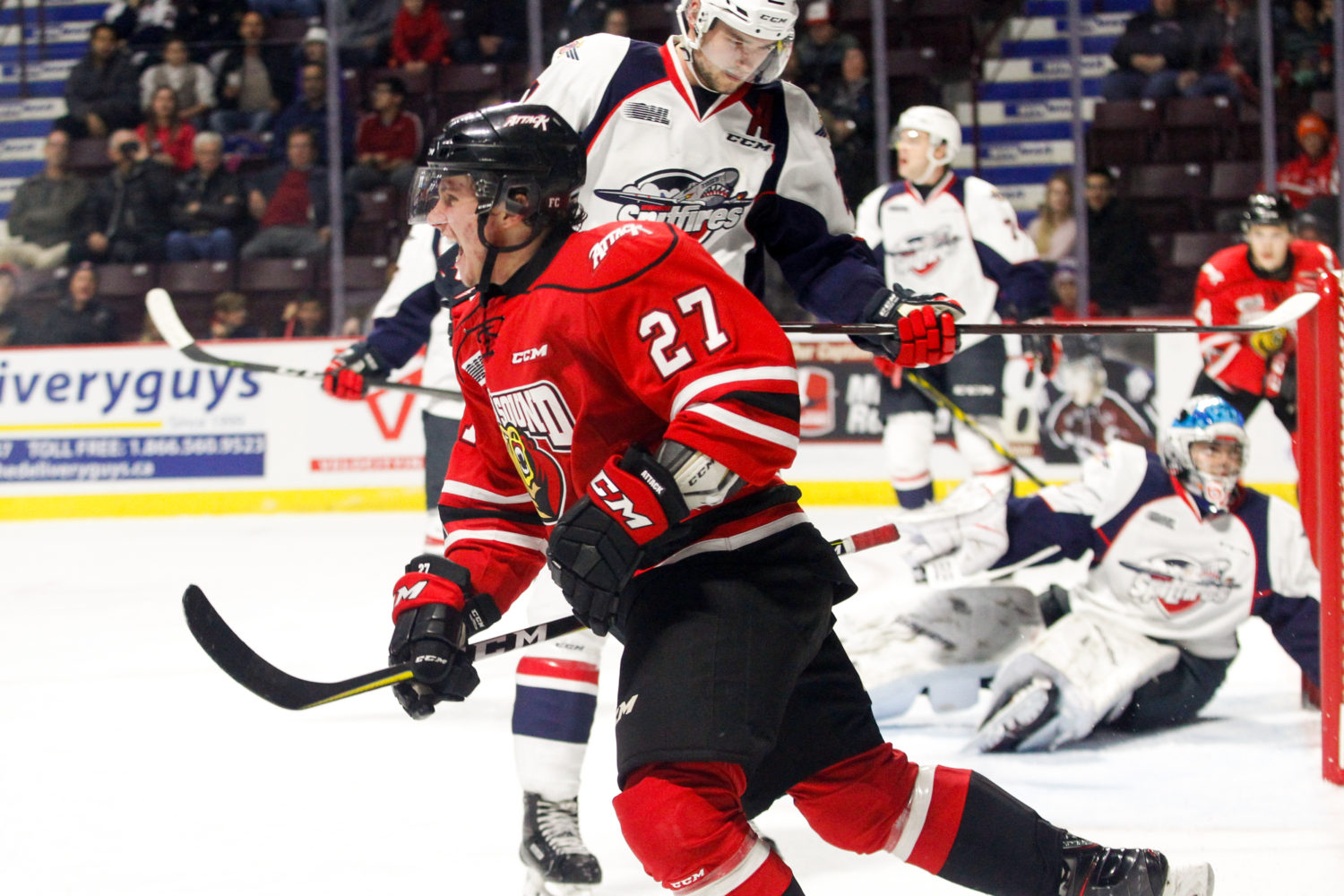