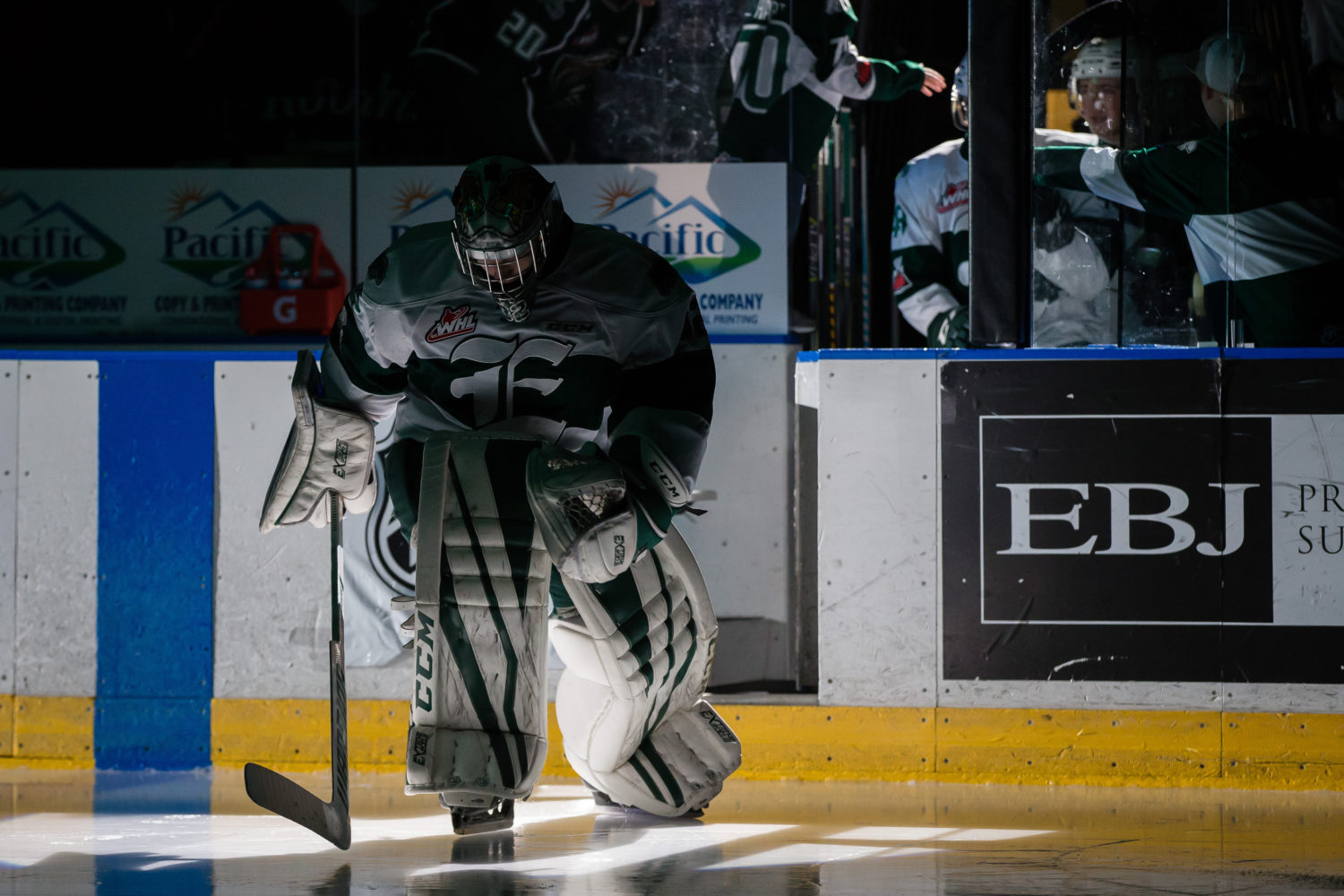 As efficient as travel may be with the LA Kings, there are plenty of hurry-up-and-wait moments. There are those episodes in which the team queues while waiting for access to the arena, or to board a plane, or to exit the team bus. In those moments, one topic was regularly broached.

“So, did you see what Wolfie did tonight?”

It was a question often accompanied by a sly smile when directed towards GM Rob Blake or Director of Player Personnel Nelson Emerson, whose kids “Wolfie” – that’s up-and-coming goaltender Dustin Wolf – played with as a member of the LA Junior Kings.

Wolf is not a Los Angeles prospect. He’s not yet the prospect of an NHL team, nor is he even eligible for this year’s NHL Draft. He only recently turned 17, and one year from now projects as one of the most intriguing goaltenders available for selection at the 2019 NHL Draft in Vancouver. Gaining steady hype after a rookie season in which he went 13-6-0 with a 2.25 goals-against average, a .928 save percentage and four shutouts for the WHL’s Everett Silvertips, he’ll compete for a spot on the United States’ U-18 Selects team that will participate in August’s Hlinka-Gretzky Cup and will draw heavy scrutiny in his upcoming draft season, when he’ll assume control of the goaltending reins from immensely talented Everett netminder Carter Hart, who will depart Western Washington for the Philadelphia organization.

He is also a player who has an LA Kings sticker on his computer and wears #32 because of his esteem for Jonathan Quick. “He’s very explosive,” said Wolf, who stands 5-foot-11 and, like Quick, skates and moves exceptionally well in net while bucking the league-wide trend that has recently favored goaltending behemoths.

“There’d be games where Rob and I would just look at each other and be like, ‘This kid is just amazing,’” Emerson said.

Equally amazing are the sacrifices undertaken by Mike and Michelle Wolf, who moved from Morgan Hill, near San Jose, down to the South Bay when Dustin was nine, and then eventually to Tustin, to ensure that Dustin could have the best opportunity to succeed in his goaltending adolescence.

“The commitment that this family made, to do what they did, to move down to LA was just mind-boggling,” Emerson said. Some five years later, after Dustin regularly played up a level, it helped him draw significant notice at the 2014 Québec International Pee-Wee Hockey Tournament, especially in an opener in which he matched up against AAA Blainville-Boisbriand Armada’s Samuel Poulin and Xavier Parent, two players who were selected in the top four in the 2017 QMJHL Draft and also project as major prospects for next year’s draft.

“We go into the intermission before the third, we were up 1-0 on them. I think they were in shock,” Mike Wolf said of the Junior Kings’ strong showing against the Quebec-based team that ultimately came from behind to win the game as part of an undefeated, AAA tournament-capturing run. “They interviewed a couple of the guys, and they were really worried about losing, and they mentioned having to play against Dustin. Those things are pretty special.”

Emerson coached that team, with Blake and CAA Agent Pat Brisson serving as two of the assistant coaches. All had kids on the Quebec team, with Brisson also serving as a close mentor and friend of the family – and now Dustin’s agent – after they had met earlier at a squirt tournament in San Diego in which Dustin had emerged as the top goalie.

“It takes a village, so to speak,” Michelle Wolf said. “Sacrifices on our part, having the right coaches put him in the right places. It’s not one thing that has helped him get him to where he is.”

So many sacrifices. For much of the last 30 years, Mike Wolf worked in software development – even commuting between San Jose and Southern California for four years – before the family settled in Tustin. As Dustin grew, he began taking on instruction from goaltending coaches, such as James Jensen, who also worked with Winnipeg prospect and former LA Selects goalie Eric Comrie, and Lyle Mast, a Hockey Canada goaltending coach who also has worked with WHL teams.

“He loves it. The whole hockey thing has been his dream since before he was born. He would kick me when I was pregnant at all the Sharks games,” Michelle said. “He’s the one who has really pushed everything. We’ve never, ever had to push him to go to practice, go to lessons. This has been all him. It was hard to turn down any opportunities, because he was never one who didn’t want to try, didn’t want to go play for somebody. We were along for this ride. Now that he’s here in Everett, he loves it here.”

Through his teens, Dustin enrolled in two homeschooling programs that contained large windows around which he was able to balance his study and on-ice instruction. The most recent program, National University, involved a rigorous workload that meets the requirements of the NCAA as well as University of California and California State campuses. According to Mike, he’s maintained a 3.93 GPA in doing so.

“He can go as fast as he wants or as slow as he wants. There is an end date that doesn’t move,” Mike Wolf said. “Some of the competitiveness, he always was a good student. Growing up and being around Pat and everybody, you hear, ‘OK, you want to play college? One of the best ways to make it in is to have good grades so they can take it from the academic side and not have to worry about the sports side giving you a full ride. He took some of that to heart. Being very competitive, he likes his A’s.”

It didn’t result in the decision to play NCAA hockey, but it did result in Dustin being named the Silvertips’ Scholastic Player of the Year. It’s part of a calm, cool-and-collected disposition in net that may stray somewhat from the otherwise similar styles he shares with the fiery Quick. “His demeanor for a goalie is just perfect,” Emerson said. 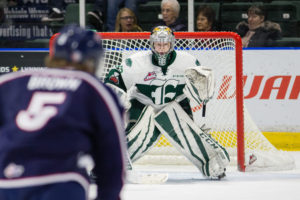 “I think one of the best pieces of advice [Goaltending Coach James Jensen] gave Dustin and us is ‘if a shot goes in, think about it for a second. If there’s anything you could’ve done about it, improve on it. Otherwise, forget about it. If you don’ think you could’ve played it differently, don’t give it a second thought,” Michelle Wolf said. “…He’s always been one that just kind of lets go and moves on to the next shot. Mind you, this kid does not like to lose, and I’m sure Nelson and Rob can attest to that. He takes it very personally after the game and he always looks at himself first before he blames his defensemen or anybody else, for that matter.”

But amidst all the camps and personal instruction Wolf has received – which take up copious amounts of his time both in-season and over the off-season and have obviously helped refine his game – there’s no substitution for pure, natural talent.

“Once we started realized how talented this kid was, we all got better,” Emerson said. “Like, our defense became like really, really good. Make the first pass, stay in the lane, block shots. And then every time we won a big game, we’d go to Vancouver and we’d upset these superstar teams. Dustin would have a ton of shots, our defense would play great, and the score was always 2-1 or 3-2. Every time.”

Those upsets of the likes of the Burnaby Winter Club were major developmental benchmarks and foreseen in his early recruitment to the Junior Kings program.

“We gave him the Patrick Roy story that when Roy played junior, he played on a bad team and he got shelled. Like a ton of shots, right?” Emerson said. “So what’s better for the goalie? You don’t want to be on the best team when you get 10 shots. He came to our team, which was good, but not great. We got outshot every game, and he had to be our best player.”

While it’s too early to start projecting where exactly he might slot at next year’s draft, several early projections clearly indicate that there will be a steady stream of scouts contributing to Interstate 5’s notorious traffic in the Seattle area. Of the WHL goalies who will be draft-eligible for the first time in 2019, Wolf had the best statistics, boosted by the time he drew the starts in net while Hart was in Buffalo, leading Canada to a gold medal at the World Junior Championship. Selected 48th overall in 2016 and the NHL’s top goaltending prospect, Hart plays a position that hasn’t recently generated a number of first round picks. Since Jack Campbell and Mark Visentin were selected in the first round in 2010, only four goalies – Jake Oettinger in 2017, Ilya Samsonov in 2015, and Andrei Vasilevskiy and Malcolm Subban in 2012 – were selected in the first round, and none higher than 19th overall.

“The top goalies, the Carey Prices and guys that go high in the draft, you understand what level they are when they’re getting in there. A lot of the other goalies are later picks,” Blake explained. “You only have two on your roster at the NHL level, and if you’ve got a starter for 10-plus years like we have in Jon Quick, you’re pretty well set there and you’re looking to acquire your goaltenders in other fashions.”

Being selected in the NHL Draft is based on merit, not on connections to team personnel or prior coaches. But even when the other 30 teams in the league continue to do their work on a player who clearly stuck out to Blake, Nelson and Brisson before he was 10, his time playing for the Junior Kings will remain an integral part of his upbringing.

“If I didn’t play for the Junior Kings, I don’t think I’d be here today,” Dustin said. “Obviously with the resources with Blakey and Nellie, and … with tons of shots over the past three or four years there, while our team did pretty good … I think that’s prepared me mentally and physically for this season and hopefully going forward.”

The Junior Kings helped provide the framework, but it’s been the sacrifices his parents have made that provided the backbone of a career that will continue to come into focus one year from now.

“It’s pretty incredible,” Dustin said. “Everyone loves their parents. I mean, I probably love my parents more than they think. Their commitment throughout my career has been indescribable.” 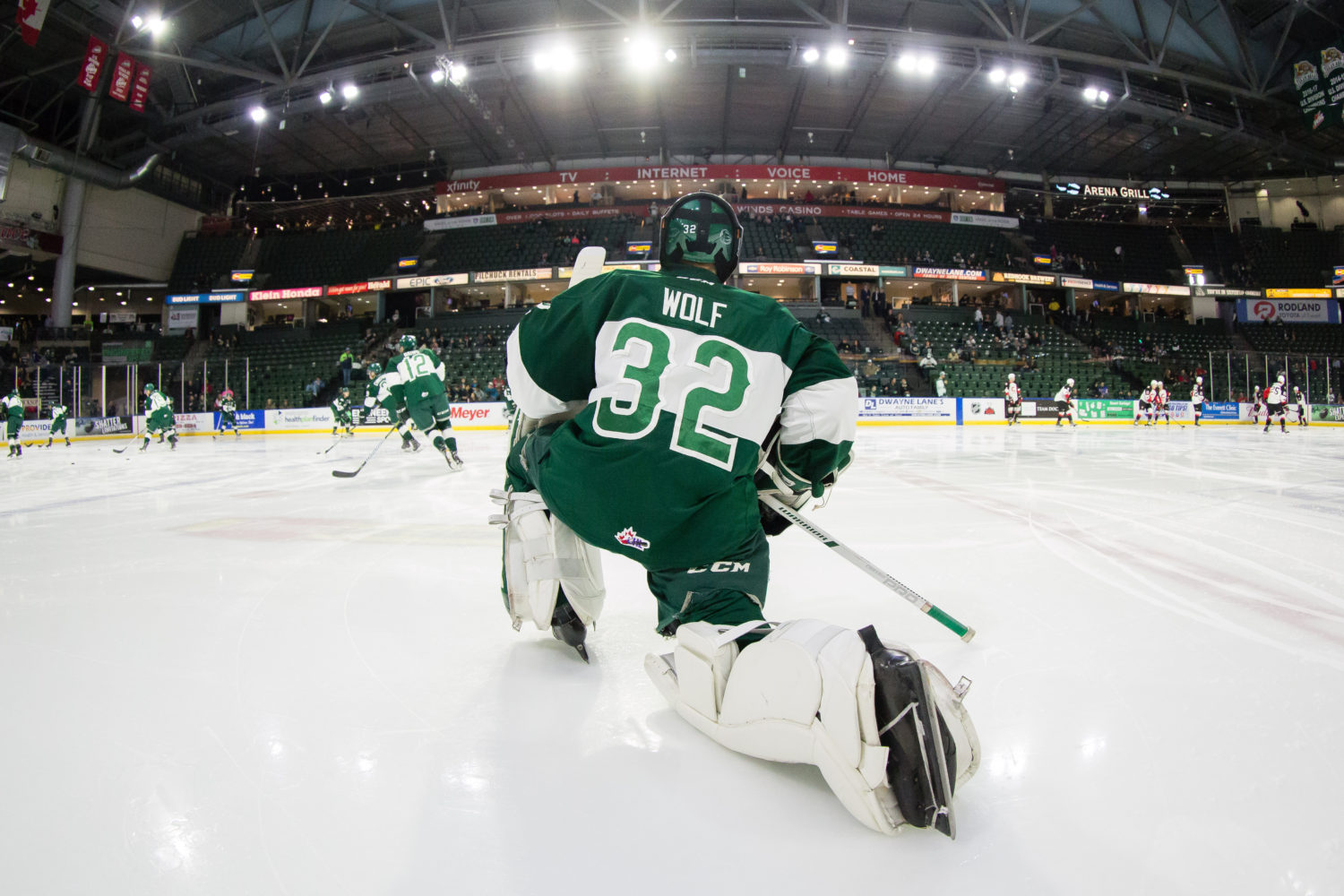