Blake and Yannetti: Draft tiers, using prior precedent, moving up or down 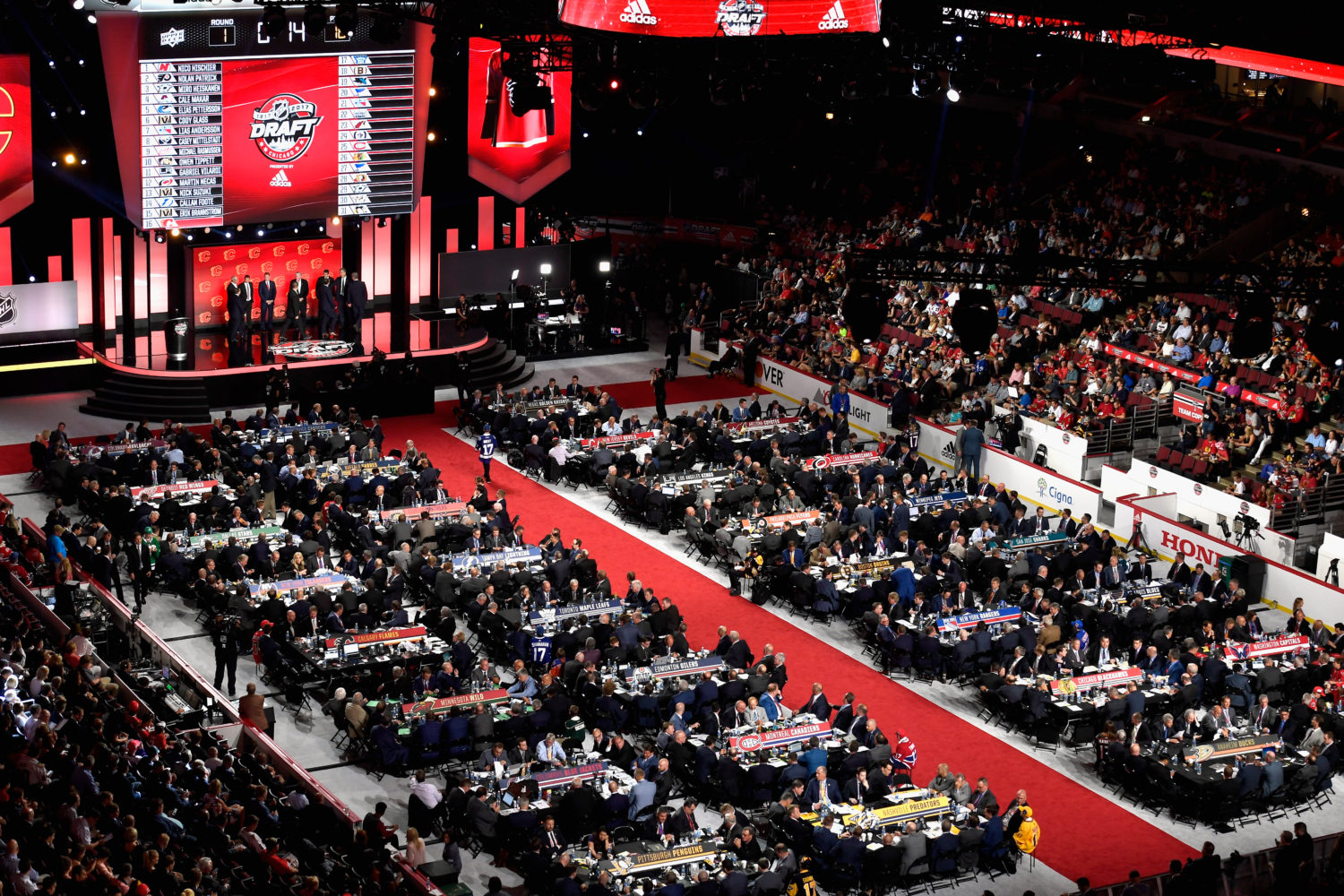 Additional notes on personnel, trades and preparation for the NHL’s busy season will come shortly, but in case anyone has forgotten, there’s a draft later this week. The Kings own seven picks, starting with 20th overall, and last week I spoke with Director of Amateur Mark Yannetti to get a sense of how the draft shapes up as well as the team’s overall philosophy towards scouting and adding prospects. Earlier today, GM Rob Blake and Yannetti held conference calls in which a number of drafting and scouting topics were covered. There’s a ton of interesting observations below, including how this year’s first round slot is “really scary” for Yannetti, how the team uses prior draft precedent – with Thomas Hickey serving as one particular example – and methods in scouting and selecting when the team is making a strong push to add and cultivate speed and skill amidst the raised pace of the modern game.

Rob Blake, on any evolution towards formulating a list, drafting, and working alongside Mark Yannetti after his first full season as general manager:
I think there’s been much more conversations in the type of movement in the draft, and probably for me, understanding that. Where you put players, whether you move up or move back, acquire picks. We’ve done a lot more research on the percentages of different picks, the points-per-game in different rounds, but more of that as a group I think last year, taking this job early in the summer prior to the draft, there were so many other things to cover. I was very confident in Mark and his staff in what he did. I think it’s been much more involved together the last few months at the list, identifying certain needs and looking at players throughout the rounds. [Reporter: Would you say that this year, you’d be helping drive those decisions more, or is this still largely something where you want to let Mark run the show?] They’re the ones that view these guys on an ongoing basis, and they have the best – I think the communication has increased in the direction of the team and what we want to accomplish at the draft. You look at the organization as a whole, some of the needs, we filled a lot of needs with free agents, but there are still some holes that need to be filled. I think that’s where the communication and identifying the types of players, and then obviously Mark and his staff are the ones that understand those players better than anybody here.

Blake, on whether he’s received any calls on the 20th overall pick:
No, we haven’t received calls specifically regarding the 20th pick. Like I said, I think when we sit with Mark – and we’ve done that previously and we’ll do it here before the draft – you look at all the different scenarios. The 20th, a lot of the stuff unfolds at the draft because more players can fill in in the top between you there. We have looked at those different scenarios of moving up or moving back based on what players are available, but again, until we start coming off the board on draft day, that doesn’t really take shape.

Blake, on whether players are pinpointed based on situational needs, such as power play:
To a point, but you’re also drafting [18-year-olds]. The odds of this player becoming an effective power play player on your team is probably a few years out, unless you get lucky early. But we look at the different aspects of that – whether they’re a shooter on the power play. How are they scoring their goals? It kind of trends with some of the analytics and the stats on where the goals come from and different things. I think when you’re breaking players down and you’re trying to separate a group of three or four, you really dig into the different aspects on how they score, whether it’s power play, even strength, off the rush, from a shot, are they more of a passer? All those come into the equation when you’re separating players.

Mark Yannetti, on the draft’s depth, how players are separated, and what might be available at 20:
I think there were a couple tiers in this draft. I mean, there are always tiers in any draft. I think there’s two distinct tiers, maybe even three. I mean, obviously [Rasmus] Dahlin is considered a generational talent, and then you have some people think a consensus at two. So, two-to-five would be a tier, and then probably six-to-10, maybe even six-to-12 this year that I find that there’s a tier. I think there’s good depth to the draft. A lot of times people say, ‘it falls off after those tiers.’ I wouldn’t say that. That’s a real limiting way of thinking. I think there’s a lot of depth. I think there’s a definite tier there, but I think it gets really close after that rather than falling off. I think from picks, maybe 19, 20 right where we are, we’re right at that cutoff. I think the picks from right around 20 to 50, or even 20-to-60, are very, very close – maybe closer this year than any year I can remember in the past.

Yannetti, on learning from previous drafts using data, hits, misses and prior precedent, both with the Kings and league-wide:
Without getting into proprietary information, I constantly – and when I say ‘constantly,’ I mean constantly – reevaluate every draft I’ve ever been [involved in]. I guess those of you who know me know that I probably have a sickness bordering on compulsion with things like this. That’s changed over the years. The way I reevaluate it, the way I continually evaluate it has changed. Again, everyone wants to assign fancy terms and use the word ‘analytics’ because it makes everyone sound so smart, but we’ve been using analytics since Day 1. We just called it ‘numbers.’ History of numbers. But, they’ve gotten more focused, especially with Jeff Solomon. He’s really at the forefront, and I’m heavily involved with him there. I’ve started to use more focused things to look at the draft. So, there’s obviously the simplistic way – you go back and look and see what you hit and missed. A P.K. Subban in the third round, you look league-wide, league-wide everyone missed and you look closer and you realize you missed, and then you try to figure out how and why. That’s easy. We pore over that. We look at picks like Voynov in the second round, Toffoli in the second round, and you look at those are real high, borderline homerun picks, and you try to figure out, what did we see? That’s without getting into it. That’s the easy thing. You look for things like that. Then there’s other things, too. I look at patterns. I’ve got 11 years of empirical data since I’ve been with the Kings. Simple patterns of what type of player a certain organization trends to. When did they trend to that type of player? How often are Central Scouting’s list and Red Line Report’s lists close to Bob McKenzie’s list, how often are they close to predicting where guys are? If you can try to use that to determine if a player you want might or might not be there, and then there are some more advanced numbers and some metrics we look at that I really wouldn’t get into.

But I probably spend too much time doing it, and part of the problem is the evaluation process usually takes a minimum of three-to-five years – the re-evaluation process. So, when you’re evaluating this draft in July, which I will do even though I know I shouldn’t – I can’t help myself – I look back at the Thomas Hickey draft. We were ‘head-scratchingly stupid’ drafting him at four. ‘What are they thinking?’ And then, you look at the draft six months later, and he’s captain of Team Canada [at the World Junior Championship], and he’s doing all sorts of stuff, and you’re like, ‘wow, we were absolute geniuses. I mean, we’re smarter than anybody in the league,’ and then fast forward two years, he can’t make our team and we lose him on waivers, and you’re like, ‘geez, did we ever miss on that draft pick. What did we do wrong?’ and now, 450 games into his career, he looks like a pretty solid pick. So, that’s part of the problem with the reevaluation process, is the timeline. I still think it’s worth doing, and anything worth doing, I guess, is worth over-doing, but I think we’ve gotten smarter with how we do it, as well.

Yannetti, on the depth of the pool at 20, and how many players the team is looking at there:
This draft is really scary for me. We’ve pored over it. Again, when you’re drafting two, or when you’re drafting four or five, you’re looking at really two or three players. It’s very easy to be focused, so it’s a little harder there. I would say we’re looking at five players at 20, and I’m not certain that any of them will be there, which becomes scary, because I don’t like feeling powerless. So, obviously we would’ve discussed moving forward or back. It’s becoming harder to do either in the drafts. I’m not sure why. Actually, I have ideas as to why, but I don’t want to alienate peers, but it’s become very hard to move in the draft. If those players aren’t there, I think there’s going to be a good player available at 20. I think there’s going to be a very good player available at 20, and even if the guys we’ve targeted there aren’t there, I think we’re going to be able to put a player in who addresses – whether it’s speed, whether it’s skill, that’s for Rob and I and the staff to determine what that philosophy is – but we’ll be able to do it at 20. But my biggest worry is, again, when we talk about those tiers – when I say there’s a tier that stops at 12, that doesn’t mean it stops at 12 in a macro way – like, that means it stops at 12 on our list. So, you have 31 teams. I would think that there’s probably 15-to-19, maybe even 15-to-20 different guys. If every team gave their top 12 or their tiers, some teams might have 10, some teams might have 12, some might have eight, but a lot of them are going to be different players. You have the same five or six, and then you have a very different seven-through-12 on a lot of lists. I’m hoping that the teams picking in front of obviously have a different tier of players on their list. But, again, I would like us to be proactive in moving if we need to. If we see one of the guys we covet, similar to what we did with Toffoli a couple years ago where we moved up two spots to get him, I bet you’ll see us be proactive in that. We’ve obviously had those kind of discussions already, but I’d also like to see us be proactive to move back. For a team that hasn’t had a lot of high picks lately, it might be scary to do, but I think if that tier of player isn’t there, I would really like to see us explore moving back. Whether or not we’re able to do it, again, that’s a very different [scenario].