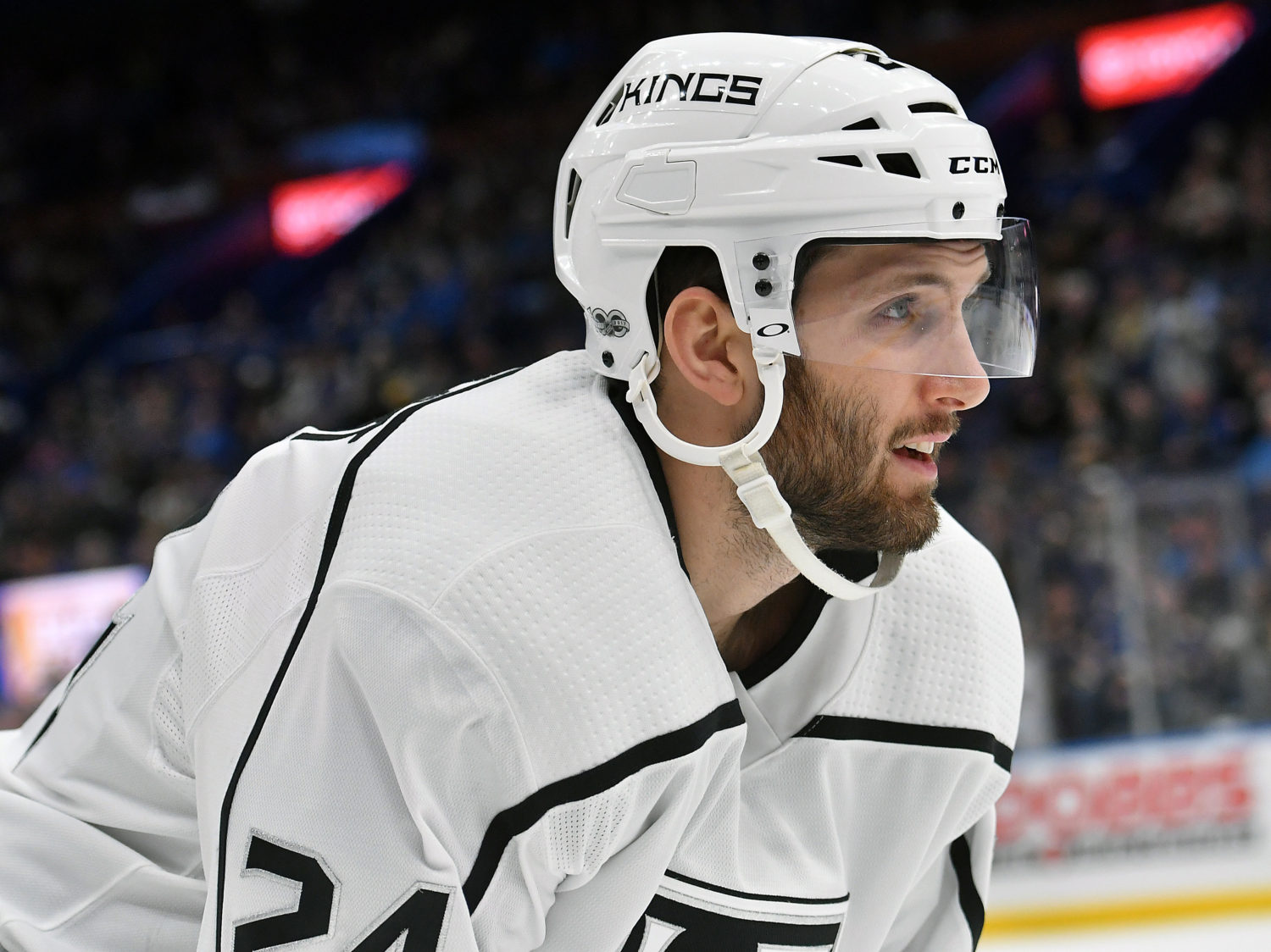 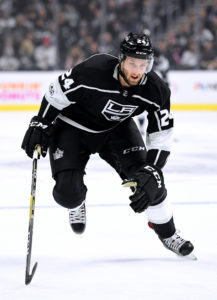 The good: Gradual and steady development has benefited Derek Forbort, who has admirably fine tuned his own offerings through 115 NCAA games, 187 AHL games and the first 174 games of his National Hockey League career. The kneejerk references to the fact that he was chosen one slot ahead of Vladimir Tarasenko or that he was the final first round pick from the 2010 draft to make his NHL debut will always exist, but Forbort has developed into a sturdy and reliable defender for Los Angeles and signed a relatively lucrative and hard-earned contract extension in October while a number of players called to the Staples Center stage before and after him on June 25, 2010 no longer play in the league. There has been a clear, if modestly sloped, upward trajectory in Forbort’s play, and in 2017-18, prior to the terribly timed knee injury that ultimately ended his season in Game #80, the slick-skating, left-shot, play-disrupting stay-at-home defender had demonstrated a number of advances in his game. His long wingspan leads to an active and very good stick that he uses expertly on the league’s top-ranked penalty kill, of which he averaged 2:42 per game, second only to Drew Doughty’s 2:45. That reach aligned well with the team’s reinforced use of stick checking. “I think he’s got the best stick on the D core,” Alec Martinez said in February. “He breaks up a lot of plays with his stick and part of that is it’s often times in the lane, and it’s in the lane because he’s in position. … He’s very sound defensively and he’s really smart back there, and saying that he has a really good stick, that’s not to take away from his ability to physically break things up. He’s a physical guy and he’s a huge asset to our D corps.” Doughty, meanwhile, always had the time to talk about Forbort’s defensive play. “Forbs is unbelievable at defense. Like, I can’t even explain how good that guy is at defense. He’s so good,” Doughty said in December. “The difference between him and Muzz is Muzz might be a little better at moving pucks, and that’s not a knock against Forbs, but Forbs’ defense, he might even be better than me at it. That’s how good Forbs’ defense is, and that’s how much confidence I have in his D.”

In 2016-17 he really began to heed a call to add snarl and competitiveness in the harder areas, and in the two weeks leading up to his injury this past year, his battle component appeared to be at an all-time high in his young career. “He’s really learned how to compete at a higher level than he probably did as a young player,” John Stevens said in March. This shouldn’t be understated, given the encouragement to add firmness to Forbort’s calm, cool and collected disposition. In back-to-back games just before Stevens’ observation, Forbort had returned to the ice after his ear was sliced open by a skate in an overtime win at Minnesota, and as part of a seven-block performance the next night, he blocked Dustin Byfuglien, Tyler Myers and Nikolaj Ehlers shots on the same two-plus-minute shift that was mostly comprised of shorthanded time. He is more of a player who uses his stick and positioning rather than pure, blunt heaviness, but he continued to add to his rugged play by coming to the defense of his teammates, as he did in the immediate aftermath of Patrick Maroon’s head shot on Drew Doughty. Even though his usage was clearly aligned to the defensive zone – he had the lowest offensive zone start percentage out of Kings defensemen – his possession rates, relative to his teammates, rebounded into the black after last season. His shot suppression shots were good; his 28.6 SA/60 was the best out of any defenseman who spent the year with the team. He’ll never be known for his offense, but his 10 first assists , based partially on his ability to get pucks towards the front of the net for his teammates to deflect, impressively ranked fourth on the team and were, uh, twice as many as Jake Muzzin’s.

The bad: Similar data to last year indicated that Forbort’s play was sustained by the substantial amount of time he played alongside Drew Doughty. And that’s all fine and good; the two have etched out a partnership, Forbort has essentially been effective there, and even if Doughty doesn’t play alongside a “two,” it helps balance out the rest of the Kings’ defensive corps, which over the past two seasons has become more mobile. But, for the second straight year, the underlying numbers illustrated that Doughty’s ability to push play towards the attacking end came more easier without Forbort (53.1 CF%) than with him (51.6%), and that Forbort was in the red, possession-wise, when moved away from Doughty. (Keep in mind, too, that Forbort’s skill set mean that he’s going to be assigned more defensive zone starts, muting some of his possession-based metrics.) And though he was the second most utilized shorthanded option, his numbers don’t exactly paint a picture of a shut-‘em-down, naturally born killer. In 4×5 penalty killing, he allowed the highest rate of scoring chances and high-danger scoring chances per 60 minutes among the defense, and the 20 power play goals scored while Forbort was on the ice in 4×5 situations was five more goals scored than any other King was on the ice for.

What you’ve seen with Forbort is likely what you’re going to get, but with added tenacity, grit, firmness, intangibles, etc, etc, etc. There are limitations in his play, especially in the offensive zone and in joining the rush, but as a smooth skater with a long reach and the ability to disrupt plays in the defensive end, he has carved out a useful niche as a middle-tier defenseman with the ability to hold his own while playing up a rung. 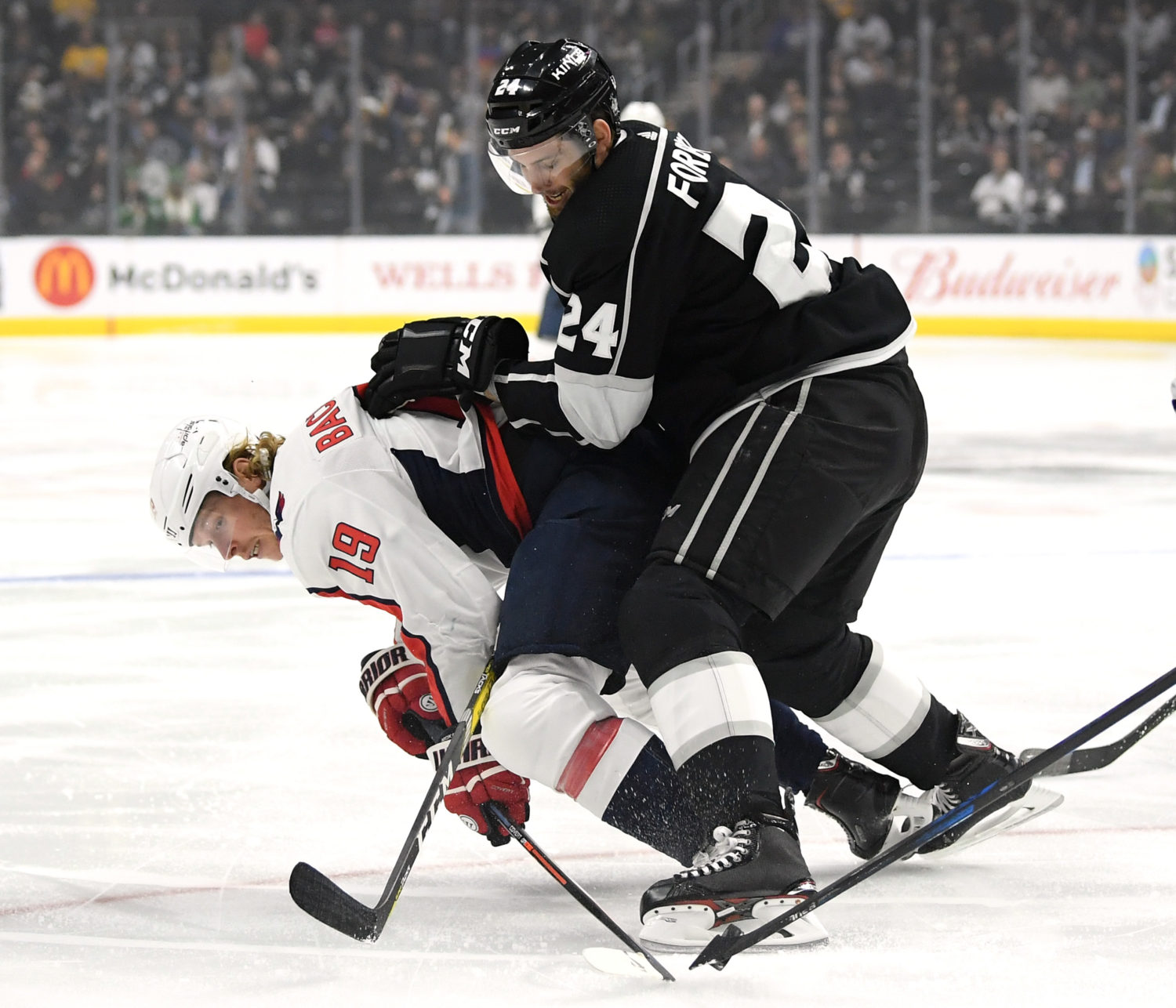 Going forward: Forbort signed a two-year, $5.05-million extension in October. With the acquisition of Dion Phaneuf in February, the Kings now have five defensemen carrying at minimum a $2.5M AAV. The Phaneuf acquisition was a necessary one to shed Marian Gaborik’s contract, but that’s still an expensive defensive group, even in advance of Doughty’s next contract. It is expected that conversations will be held in which the team considers the possibility of trading a defenseman for a forward, but to this point, Muzzin and Martinez’s names have been the only names to float into public cognizance. Expect Forbort to produce a near carbon-copy to his 2017-18 season. His ability to ascend into a 20-minute-a-night workhorse early in his NHL career is also a strong representation of the work undertaken by the development staff as well as the natural ability of a player who has bought into his teaching. Forbort’s skill set isn’t sexy, per se, but it’s certainly effective in concert with the team’s efforts to become more mobile while maintaining their defensive ethos. “He has used his time wisely to put in the time to become a better player,” Stevens said. “I think the big thing with Derek coming out of school was he wasn’t quite sure what kind of player he was. We weren’t sure if he was an offensive player. We weren’t sure if he was going to be a shutdown guy and I think through his development he has a real, clear identity as a player now. … We still think he needs to help us by getting pucks to the net and being involved in the rush but he’s going to be a shutdown guy first. I think he has really embraced that role.” 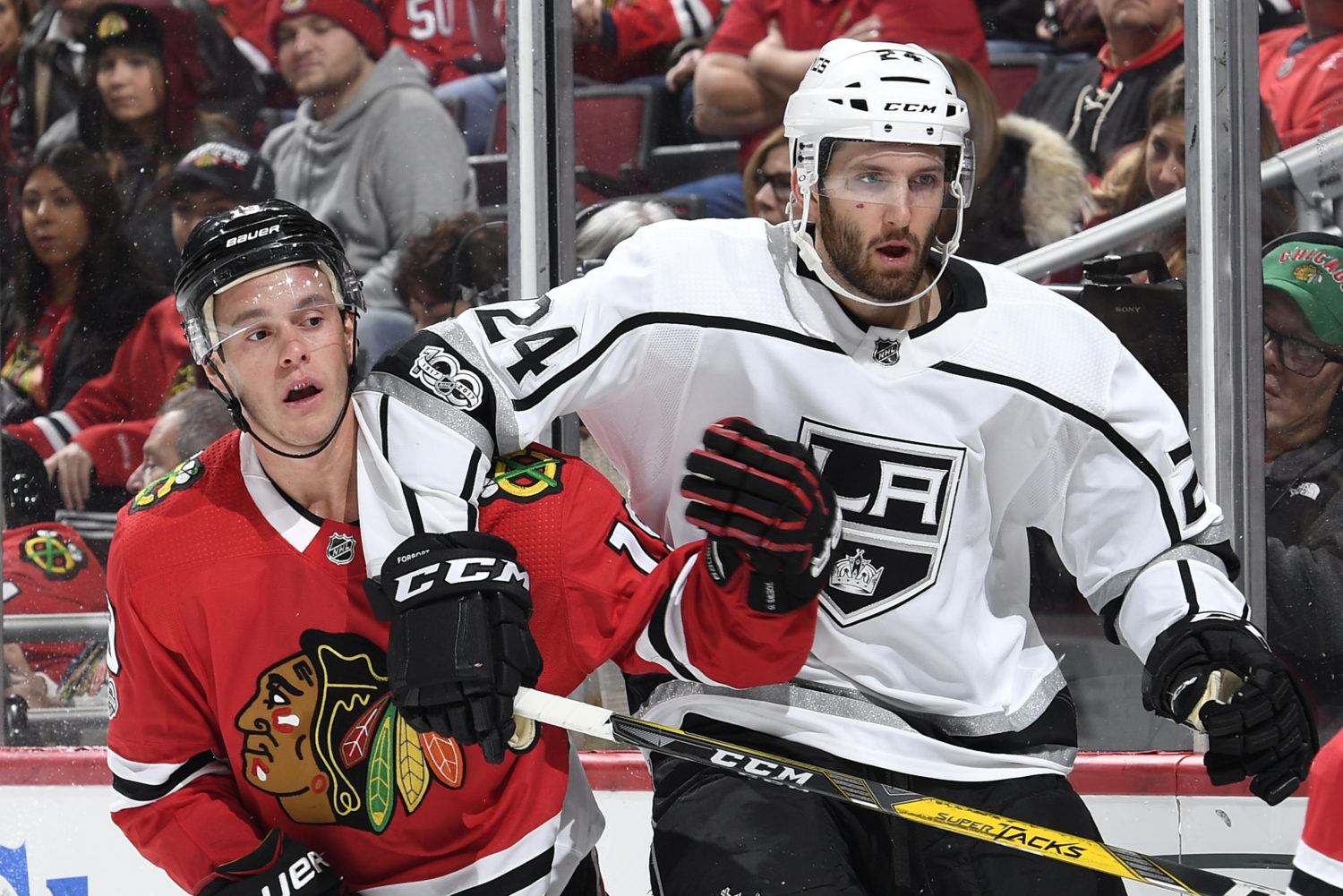 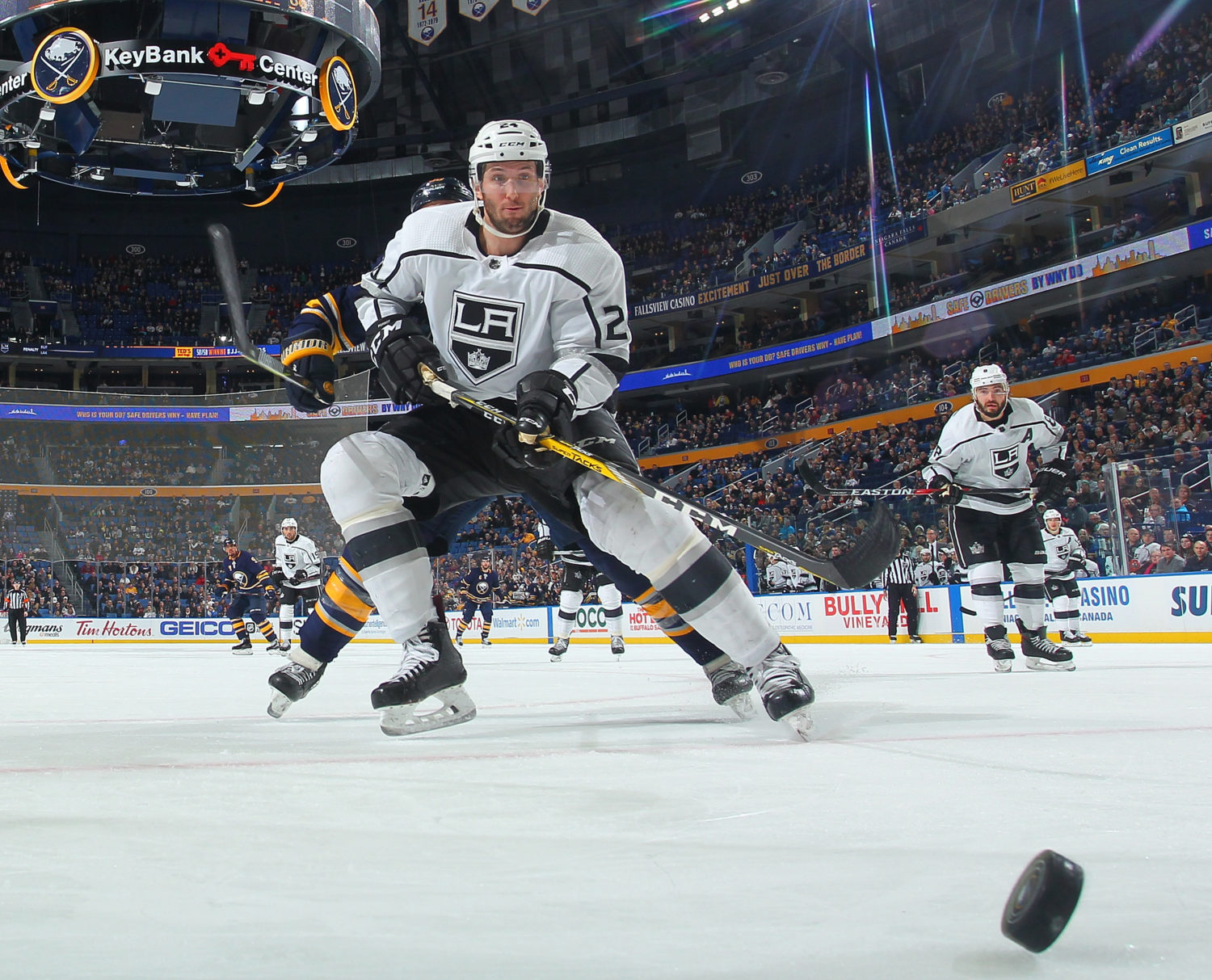