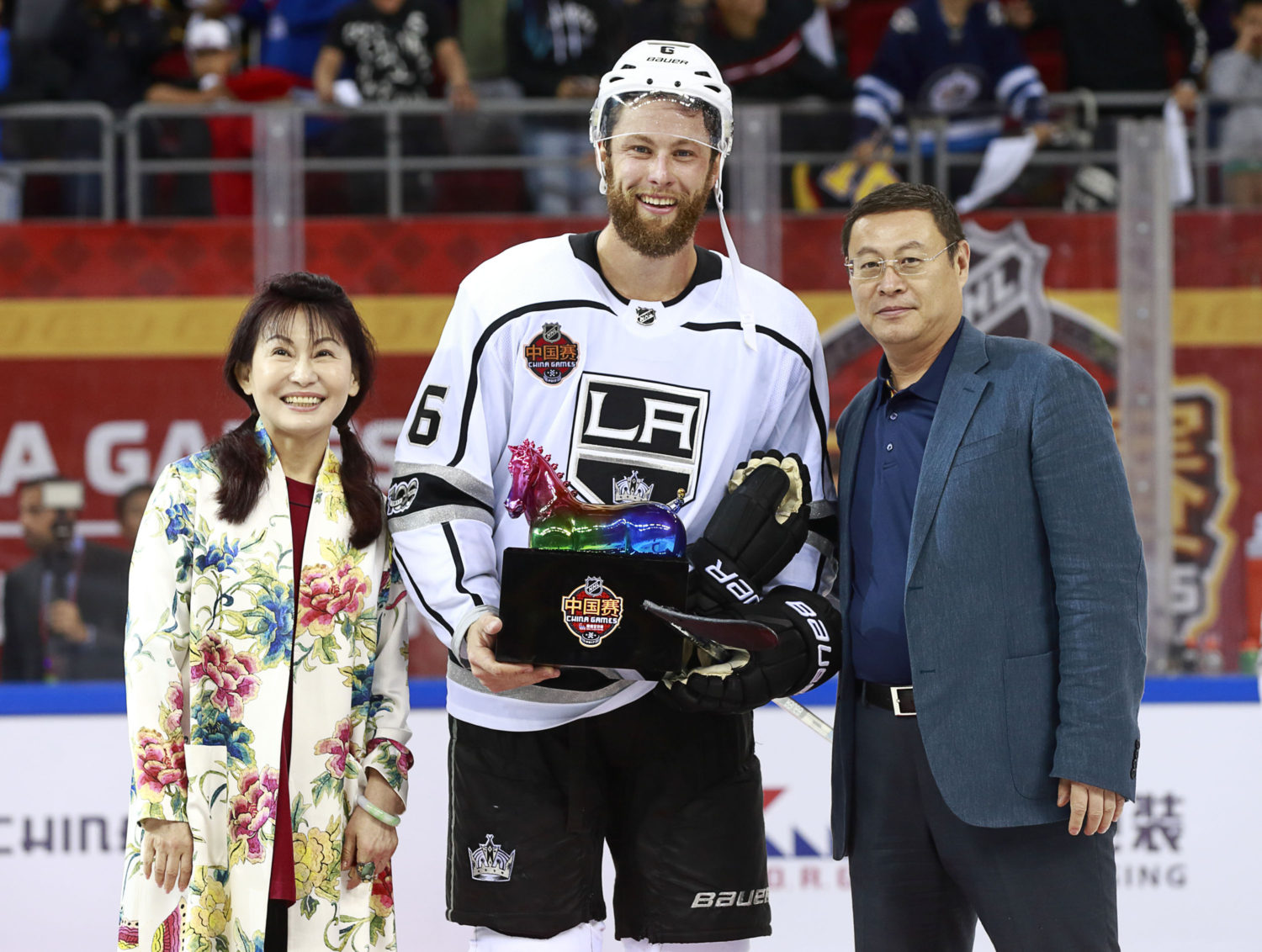 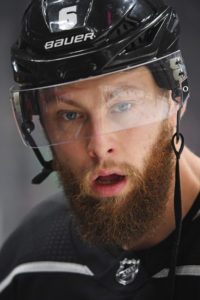 The good: Jake Muzzin, like Dustin Brown, Hart Trophy finalist Anze Kopitar and Norris Trophy finalist Drew Doughty, is among the core group that a new coaching staff was going to lean on heavily in all situations. This largely turned out to be good news for all involved; many of these players went on to produce career years, and Muzzin, like several other veterans, engineered a bounce-back season that reaffirmed his place near the very top of the defensive rotation. Last season’s evaluation noted that the Kings “do not have a number two unless Jake Muzzin is a number two,” and in 2017-18, Muzzin was a very, very good two. As Muzzin was, well, crowned China Games MVP and received his “custom made horse piece,” John Stevens sat behind a microphone in Beijing and spoke about how his defenseman “had the summer, probably, of his life.”

“Not that he’s not a well-trained guy,” Stevens continued, “but he’s really taken it to another level, and his focus has been getting to training camp and getting off to a good start. We talked to him about playing lots in preseason, really getting a good feel for his game and getting a really firm defender-type game back in his identity. I think he’s done that.” That preparation and preseason hype carried over into the regular season as he shot out of the gate with two goals, eight points and 19 shots on goal in the team’s first seven games. So much of the five-on-five possession and production that Muzzin helps generate stems from his checking and ability to shut plays off quickly in the defensive zone, often along the boards and in harder areas around the net. That checking allows him to play with added confidence, and as a good skater is someone well equipped to play at the raised pace of the modern game. A short lull followed his excellent start, but once he got his game back in order, he went from November 25 through January 2 in which two thirds of the five-on-five goals he was on the ice for were scored by the Kings. His own personal high-water mark coincided with the Kings’ high-water mark – a 24-11-5 record shortly after the turn of the new year.

Impressively, the Kings operated with a 56.6% Corsi-for and a 58.6% scoring chance-for percentage while he was on the ice with Drew Doughty, depicting a noteworthy ability to push play to the attacking end while facing typically difficult match-ups. “He’s got good hockey sense,” Doughty said. “He’s quick on getting on guys so he doesn’t give them a lot of space. We communicate well. He talks a lot. I talk a lot. And yeah, he’s physical. Got a good stick. He’s got all the traits you need to be a good defender and he takes a lot of pride in it too, so that’s why he does a good job.” This helped the bottom line; Los Angeles consistently relied on scoring from defensemen, and Muzzin and Doughty posting career-highs, production-wise, aided the overall offensive push. He also continued to grow into more of a leadership role having moved up a hierarchal rung in the aftermath of the ongoing departures of players who’d played key roles in the past. A player willing to play through pain and discomfort, Muzzin’s 281 consecutive games played came to an end when he was forced onto IR while dealing with a nagging upper-body injury in early January.

The bad: There’s really not a ton here, other than the occasional mistakes and lapses that rear their heads in Muzzin’s play. But in 2017-18, arguably the finest season of his career, Muzzin minimized his mistakes and imparted his diverse-but-heavy skill set into the game more consistently than any prior season in his career. He suffered a significant shoulder separation late in the season and returned at less than 100% for Game 3 against Vegas, but by that point, Los Angeles was trying to dig out of a 2-0 hole. Also, we’re not holding one of his injuries against him. To nitpick a bit, his penalty differential was dreadful; in over 1,602 minutes this season, he drew all of two penalties, and his minus-19 differential tied a career-low. And though he posted his traditionally sound possession rates while in a high-profile position, the quality of competition he faced, while good, wasn’t quite at an elite level. (Again, nitpicking.) He’s a power play regular, often on the first unit, but posted middling shot and chance rates on the man advantage, which included the lowest high danger chance percentage among the nine qualified skaters, as well as the second-lowest shots-for percentage and chances-for percentage. At the other end, though he posted better shot and possession rates than his teammates while shorthanded, his .877 on-ice save percentage in all penalty killing situations was the lowest among the nine qualified skaters. 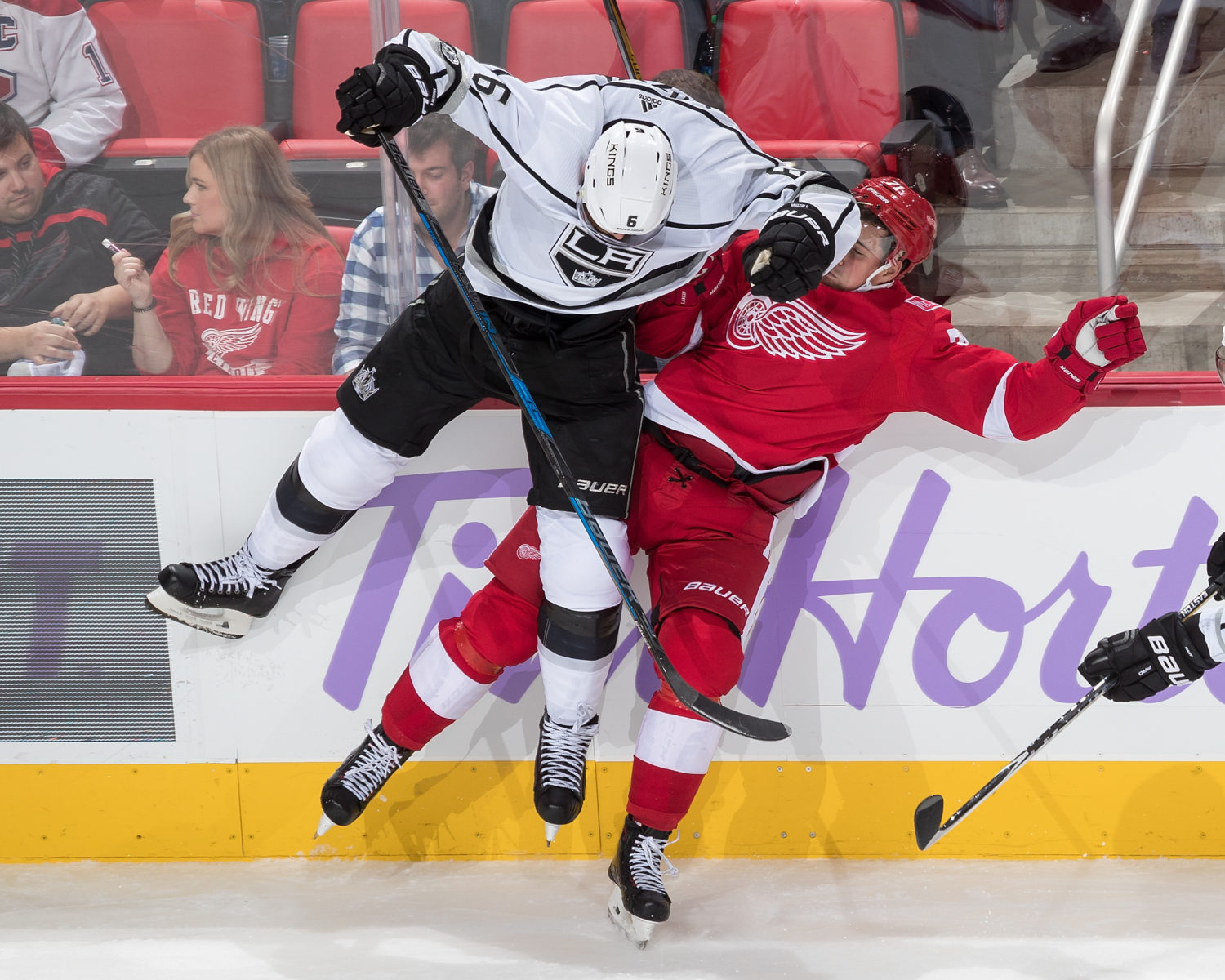 Going forward: Muzzin is a player who requires cerebral maintenance and received that in more beneficial helpings than in several recent years. “I had Muzz as a young player,” Stevens said, “and one thing we realized early on was that if you didn’t have a lot of feedback with Muzz, he probably expected the worst, so we felt it was very important with him to communicate on a daily basis on his game, what he did well, what he didn’t do well, because if he didn’t have any communication, he would just see what he didn’t do well. He’s a very hard critic on his own game, but I think through that process and with the people around him here on the hockey team, he’s become a really good pro.” Coaching is obviously much more complex than simply being a good cop or a bad cop, but Muzzin seemed to thrive to a great degree under John Stevens, who managed personnel with more of an encouraging approach than Darryl Sutter, under whom Muzzin had fallen out of favor late in the previous season. (Muzzin also won a Stanley Cup under Sutter and posted tremendous 2013-14 and 2015-16 campaigns.) But Muzzin’s 2016-17 season was off, and like several other high profile and well compensated stars, rebounded significantly to the vast (regular season) benefit of the team. Still squarely in his prime, Muzzin turned 29 in February and has two years remaining at a perfectly palatable $4-million per season. As has been reported, the Kings, at times, have weighed whether to trade from a position of strength (defense/checking) for an area of need (goal scoring), so it’s within the realm of possibility that teams do their diligence and check in on Muzzin – and other L.A. blue liners with term who would fetch a return – in off-season negotiation. But as a clear number two, any hypothetical Muzzin trade would also open up a new hole, meaning Los Angeles would need a bounty of compensation in any sort of trade. Bank on a similar season from Muzzin in 2018-19 – with the Kings. 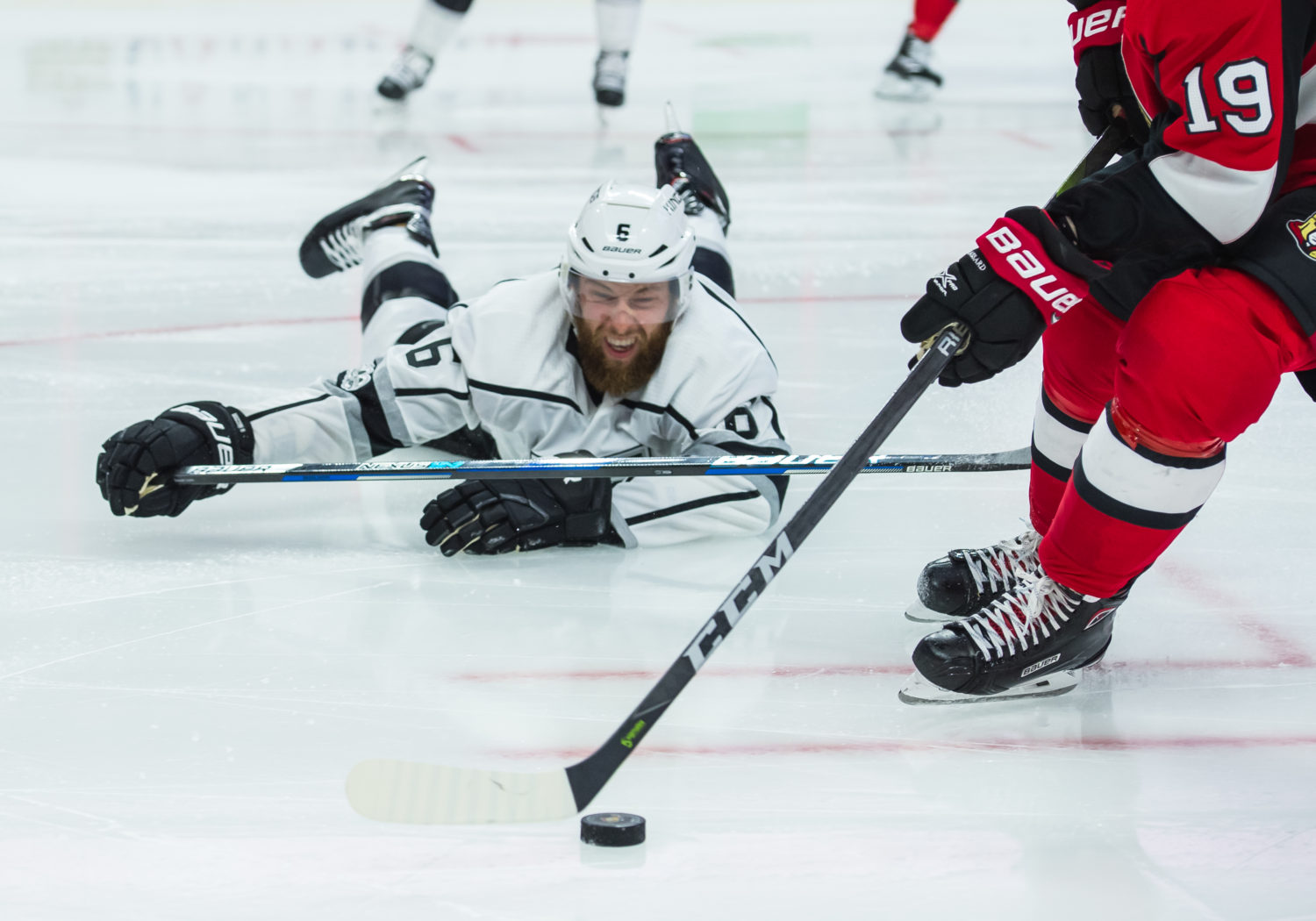 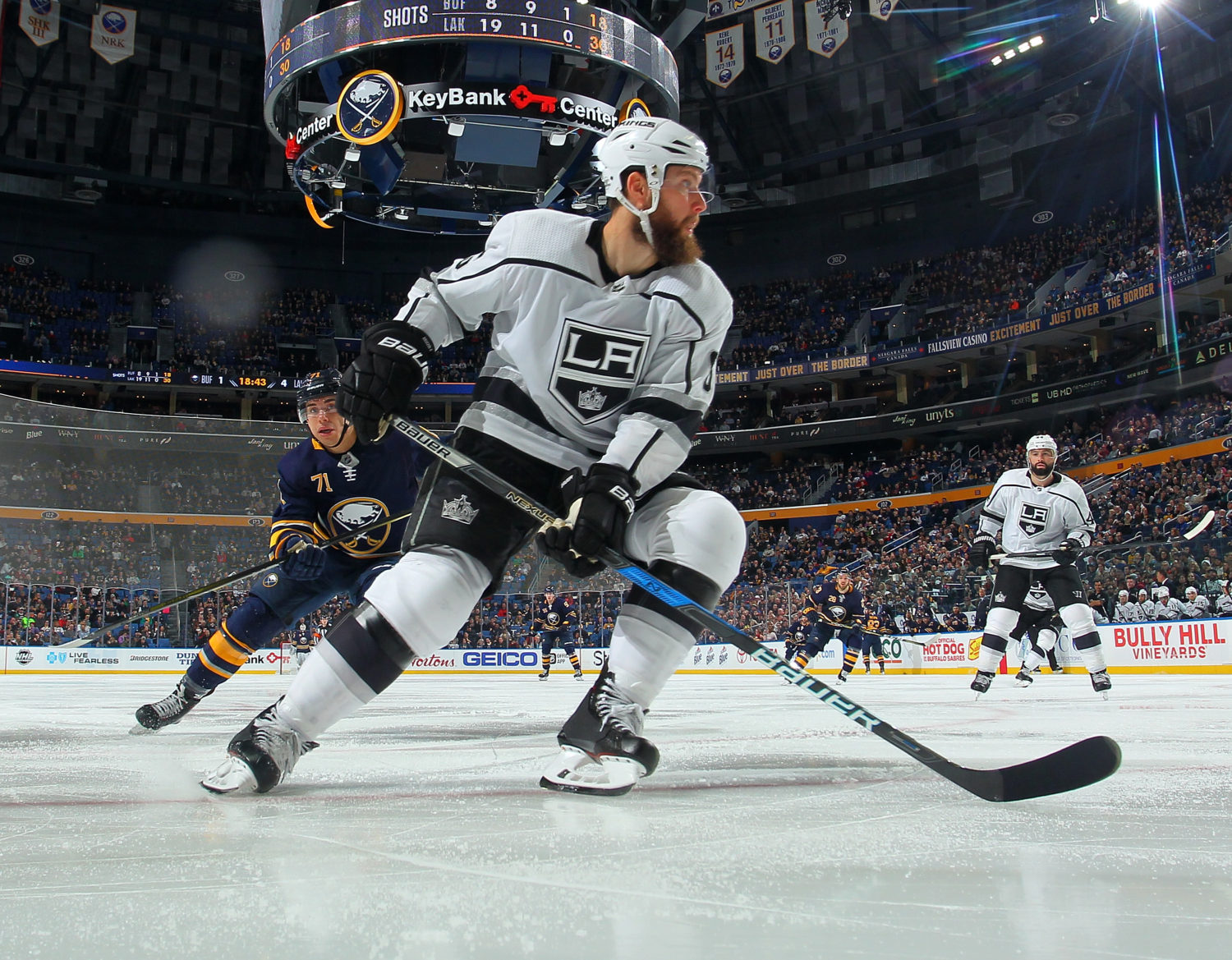