ADRIAN KEMPE GOAL ALERT | Sweden won big over Austria at the World Championship, and “Kempe is having a night playing on the scoring line” was a note that was shared on the broadcast. With a goal and an assist – in 19:56 of game time, most among Sweden’s forwards – Kempe now has one goal, four points and a plus-three rating after games against Belarus, Czech Republic, France and Austria. At 1:19 of the video, well after his goal, he also used his speed to set up a goal for the second straight game:

Kempe was a major power play presence for Sweden at World Juniors, especially during his four-goal, eight-point tournament as a newly-turned 18-year-old in 2015. There are a number of directions his career may lead. It would be interesting if Increasingly Effective Power Play Option develops within his NHL-level skill set.

No pictures of Kempe today, sadly.

L.A. CONNECTION | South Korea is participating in this tournament, having been promoted along with Austria from a pool that also included Kazakhstan, Poland, Hungary and Ukraine. (Slovenia and Italy were the corresponding relegations to Division I). This followed up an Olympic campaign that they participated in as the host team and, in the absence of any wins or points, did manage to capture the rapt attention of wildly enthusiastic home crowds. It has been an interesting several years as South Korean hockey has grown to the point that it qualified for the top-flight World Championship and boasts a highly competitive domestic team in Anyang Halla of the Asia League that allows a good portion of their top players to play together.

They’re also coached by Jim Paek, acquired in the Marty McSorley/Tomas Sandstrom swap and an LA King from February 15 to June 25, 1994, and assistant coach Richard Park, who grew up mainly in the Los Angeles area before moving to Toronto. Together, they’ve helped provide some sturdiness at the national level for South Korea.

Soon his mind travels to the same story that he told colleagues at that British Columbia conference, one he has shared many times since taking over South Korea’s ice hockey operations in July 2014. The road to PyeongChang was steep back then. The men’s team was ranked 23rd in the world, sandwiched between Great Britain and Poland, lacking homegrown talent with only 120 male players registered nationwide. Infrastructure that Paek took for granted at his former gig as an assistant with the AHL’s Grand Rapids Griffins was similarly absent, typical rink fixtures such as stick tape and glove dryers; he recalls South Korean players begging opposing equipment managers to sharpen their skates.

Several months later, Paek outlined an exhaustive, four-year plan at the IIHF’s semi-annual congress meetings in Spain, hoping to convince the governing body that South Korea deserved automatic hockey bids as Olympic hosts. Detailed down to a weekly schedule, the proposal scripted a path for the national programs heading into PyeongChang, counting upon various international tournaments to strengthen their competitiveness. It also explained methods geared toward bolstering the entire system, like how to develop new youth referees and coaches. “Every part of hockey, we tried to put inside into our presentation,” Paek says. “It wasn’t just, ‘Okay, you’re the host team, you’re in.’ There was a lot of work behind the scenes.”

I wish I could share photos of Paek and Park from this current tournament, but none are available. Instead, here’s a slick Bruce Bennett image of Paek looking to out-hustle Brian Bellows to a puck: 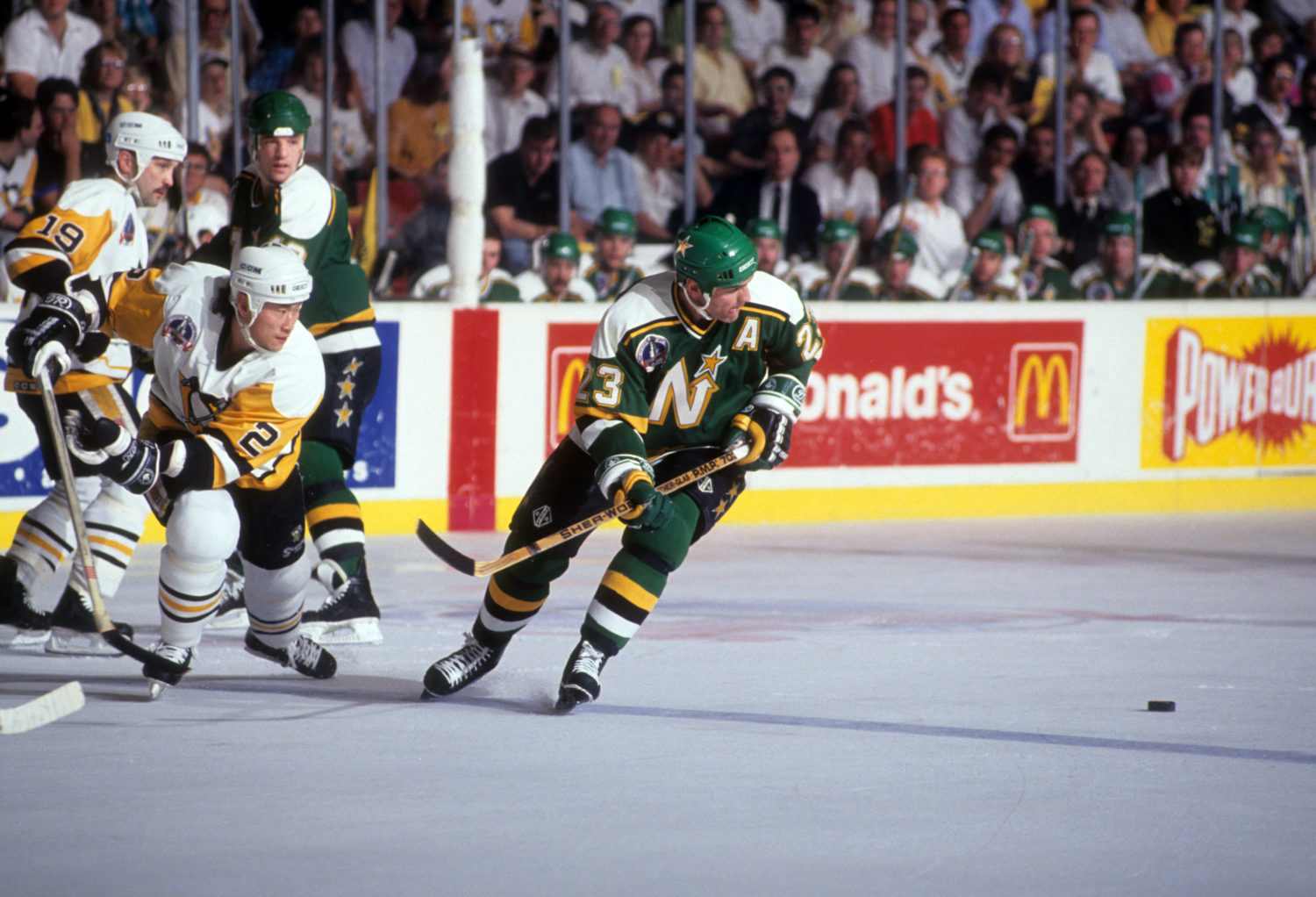 A two-time Cup winner, Paek is the first player of Korean descent to have his name engraved on the Stanley Cup. The defenseman’s only Stanley Cup Playoffs goal came on a two-on-one with Mario Lemieux in the Cup-clinching Game 6 at the Met Center in 1991.

Park, who represented the United States at prior World Championships and World Junior Championships, also has a pretty big goal to his name. The Athletic’s Chad Graff ($) caught up with Park before the Olympics in an interview that touched on his upbringing and how he and Paek have reinforced South Korean hockey infrastructure at many levels.

SPEAKING OF THE NORTH STARS | The aforementioned Pittsburgh-Minnesota series marked Ralph Strangis’ first year as a North Stars broadcaster. Some fun news on the broadcaster who did a tremendous job serving in Bob Miller’s absence last season:

Got the assignment today – looking forward to calling the Western Conference final series – all of it with @JimFox19 and @goldieonice for @westwood1sports – Don’t know where we’re starting but we’re starting on Saturday! #StanleyCupPlayoffs

An epic Game 7 awaits, but could you imagine if Ralph and Jim and the rest of the media ends up shuttling back and forth for two weeks between Nashville and Las Vegas? Godspeed to you brave souls. Get some sleep.