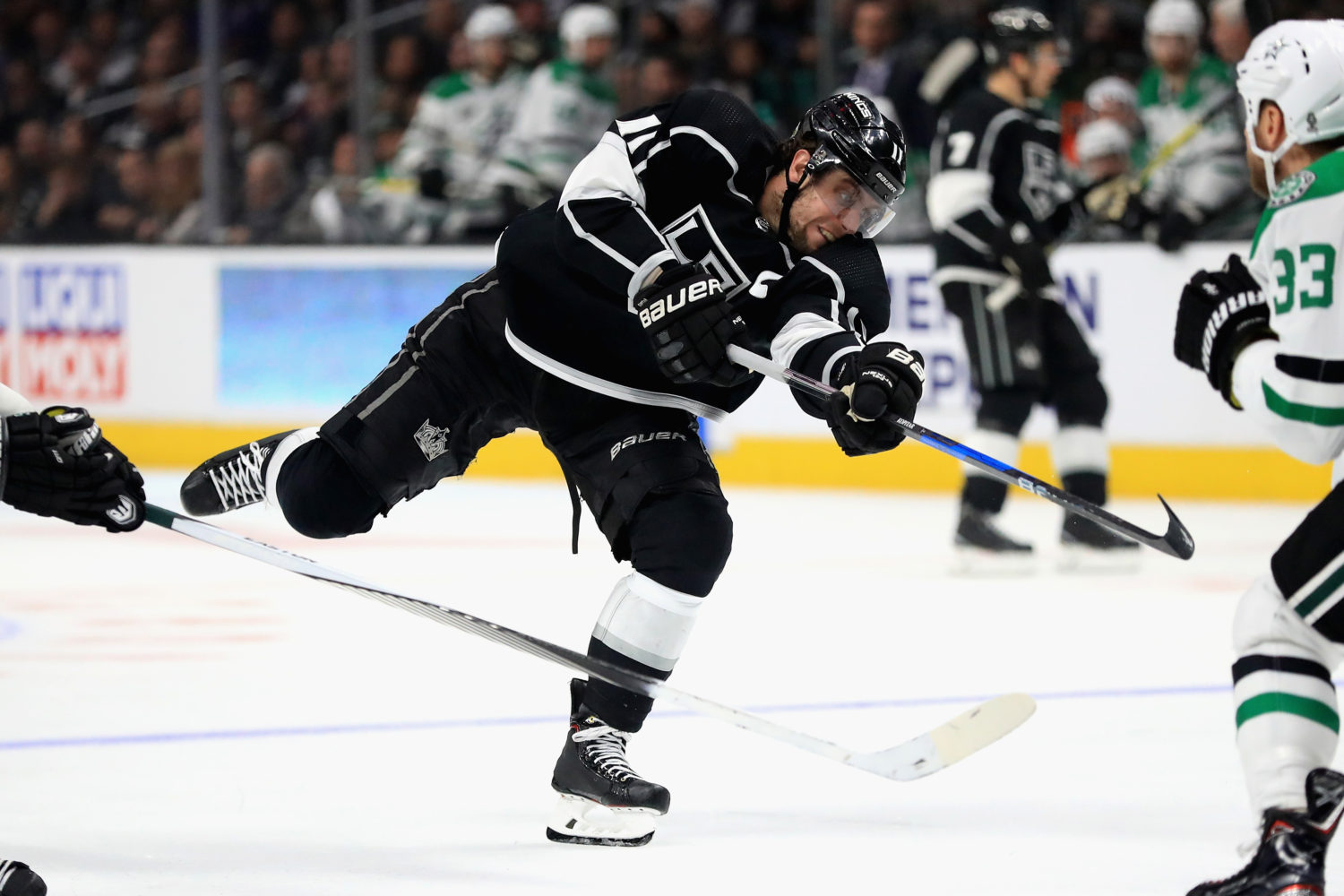 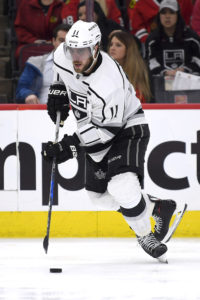 Anze Kopitar, who is also a finalist for the Frank J. Selke Memorial Trophy, is a finalist for the Hart Memorial Trophy along with New Jersey forward Taylor Hall and Colorado forward Nathan MacKinnon. The trophy is presented annually to “the player judged to be the most valuable to his team” and is awarded in a poll by the Professional Hockey Writers’ Association that uses a tiered 10-7-5-3-1 point system for each voter’s first, second, third, fourth and fifth-place candidates.

This is the first year a King has been nominated for the Hart since 1989, when Wayne Gretzky was presented the trophy following his first season with the club. Other finalists have been Rogie Vachon (1975 and 1977) and Marcel Dionne (1979, 1980 and 1981). This year will mark the seventh time in the last nine years in which the Hart will be presented to a first-time winner. Only Sidney Crosby (2014) and Alex Ovechkin (2013) had previously won the Hart since 2010.

“I’m aging like a fine wine,” the 30-year-old Kopitar said to laughter at the team’s end-of-season media availability. “It’s a long time to learn. Or maybe not, but it is a learning curve, so sometimes you’ve got to have a really bad season for in order to bounce back, and I had that two years ago, and … sometimes you almost need that kind of reality check that everything doesn’t come as easy and you’ve got to work for it. I thought I put in the work during the off-season and I had a good start. And then we always talk about confidence and confidence is a big part of this game really, for every individual on the team, so when you’re playing with confidence and a little bit of swagger, more things are going to go right than wrong.”

A more thorough dive into Kopitar’s chances will come, but the second half of the 2017-18 season framed the Hart Trophy debate as among the tightest in recent memory. All three players have strong claims to the award, along with top scorers Connor McDavid (108 points), Claude Giroux (102), Nikita Kucherov (100) and Evgeni Malkin (98), while it’s impossible to discount the 49 goals Alex Ovechkin scored to help sustain Washington’s push after some of the Capitals’ depth had been sawed off in a year many predicted them to experience a steeper standings decline. That Edmonton didn’t qualify for the playoffs soured McDavid’s bid in the minds of many voters.

But Kopitar, MacKinnon and Hall are all qualified in their own right, and interestingly, all three players were on teams that had to battle tooth and nail to qualify for the playoffs. While MacKinnon might have held a slight edge with three weeks to play in the regular season, he finished with one goal, five points and a minus-four rating over Colorado’s final eight games – a crucial push for a team that qualified after its 82nd game – while Hall (44 points from February 1 onward) and Kopitar (39 points from February 1 onward) both recorded their most productive months in February and March and outpaced MacKinnon down the stretch. It’s not clear whether that more concerted late-season focus will be taken into account; MacKinnon had recorded points in 14 straight games before his production fell off over the final eight.

In a glance at the primary statistics, MacKinnon’s 1.31 points per game and Hall’s 1.22 outpaced Kopitar’s 1.12. MacKinnon also totaled 55 five-on-five points, compared to Kopitar’s 48 and Hall’s 46. However, neither MacKinnon nor Hall can touch Kopitar’s all-zones excellence, and this is the strongest credential Kopitar boasts. Kopitar, who led all NHL forwards with 22:05 per game, far outpaced MacKinnon, who ranked 19th at 19:54, and Hall, who ranked 42nd at 19:09.

It was a career season for Kopitar, and it came on the heels of a 52-point year that was the most disappointing of his distinguished career.

“I got a little bit lighter so I think I was a little bit faster on the ice, but like I said, things started rolling right off the get-go,” Kopitar said. “You score a couple goals the first couple games, and that certainly helps. And then it just seems that the game slows down for you and you can see the plays better and everything and you’re not squeezing the stick. So once that happens, it’s easier to play.”

–Led the team in points for the 10th time in the last 11 seasons.

–Registered a career-high four goals in a single game (tied a franchise record), March 22 at Colorado.

–Registered his 800th career point (fourth Kings player to reach 800 points with the franchise) in his 900th NHL game, Feb. 20 at Winnipeg.

–Won the Bill Libby Memorial Award for Most Valuable Player on the team (sixth time; second most behind Marcel Dionne’s eight) and the Defensive Player of the Year Award (fifth time; tying Mattias Norstrom for most wins) as voted by the media.

–Spent 178:05 TOI on the penalty kill, while no other player in the Top-10 in scoring spent more than 105 TOI on the PK. Only 22 forwards recorded 165-or-more minutes on the PK, and while Kopitar recorded 92 points on the season, the other 21 forwards registered an average of 28.6 points, and the next closest players were Mikael Backlund of Calgary and Mikko Koivu of Minnesota, who each had 45 points.

–Recorded 31 more points than the second-highest scoring player on the team (Dustin Brown had 61), which was the third largest deficit among the top two scorers on any team (Hall, NJD – 41 and McDavid, EDM – 38)

–Announced as a nominee for the Frank J. Selke Trophy (forward who best excels in the defensive aspects of the game) last Tuesday. Goalie Jonathan Quick won his second William Jennings Trophy — goalkeeper(s) having played a minimum of 25 games for the team with the fewest goals scored against it — this season, and it was announced last Thursday that Drew Doughty has been nominated for the James Norris Memorial Trophy (defenseman who demonstrates throughout the season the greatest all-round ability in the position).

Anze Kopitar, C, Los Angeles Kings
Kopitar finished one point behind Hall in scoring (35-57—92 in 82 GP), nearly tripling his goal total and doubling his point total from 2016-17 (12-40—52 in 76 GP) to power the Kings to their seventh playoff berth in the past nine years. He became the first Los Angeles player to reach the 90-point milestone since 1993-94 (Wayne Gretzky: 38-92—130), also setting career highs in all three major scoring categories. Kopitar, who posted his first career four-goal game March 22 at COL, placed 31 points ahead of his next-closest teammate (Dustin Brown: 28-33—61), aided by a career-best 10-game point streak Oct. 26 – Nov. 16 (3-9—12). The 30-year-old Jesenice, Slovenia, native and two-time Stanley Cup champion is vying for his third NHL Award after winning the Frank J. Selke Trophy and Lady Byng Memorial Trophy in 2015-16. Only one player in Kings history has captured the Hart Trophy: Gretzky in 1988-89.

Nathan MacKinnon, C, Colorado Avalanche
MacKinnon placed second in the NHL with 1.31 points per game (39-58—97 in 74 GP) to guide the Avalanche to a 47-point improvement in the standings, matching the fourth-highest year-to-year gain in League history. MacKinnon, who registered 16-37—53 last season (82 GP), increased his goal total by 23 and point total by 44 to lift Colorado from last place in the 2016-17 NHL standings to its first playoff berth since 2013-14. He did so on the strength of 12 game-winning goals, tied for the League lead as well as the most in franchise history (Joe Sakic: 2000-01). MacKinnon also notched 13 three-point performances, second in the NHL and the most by an Avalanche player since 2002-03 (Peter Forsberg: 14). The 22-year-old Halifax, N.S., native and 2013-14 Calder Memorial Trophy winner is vying to become the third player in franchise history to win the Hart Trophy, following Sakic (2000-01) and Forsberg (2002-03). 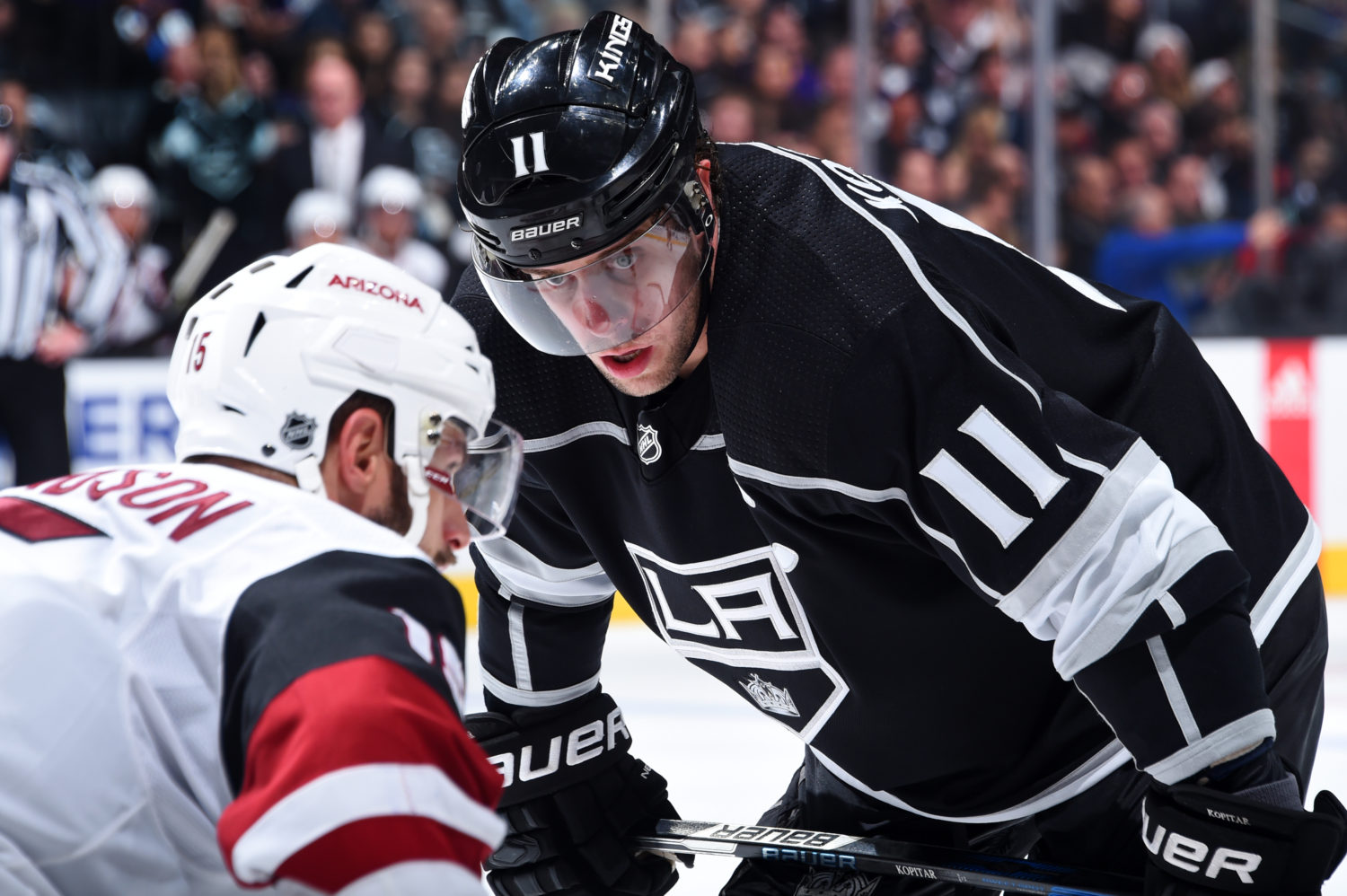