Stevens on Kempe, Toffoli, Doughty, and Karlsson’s goal off a faceoff 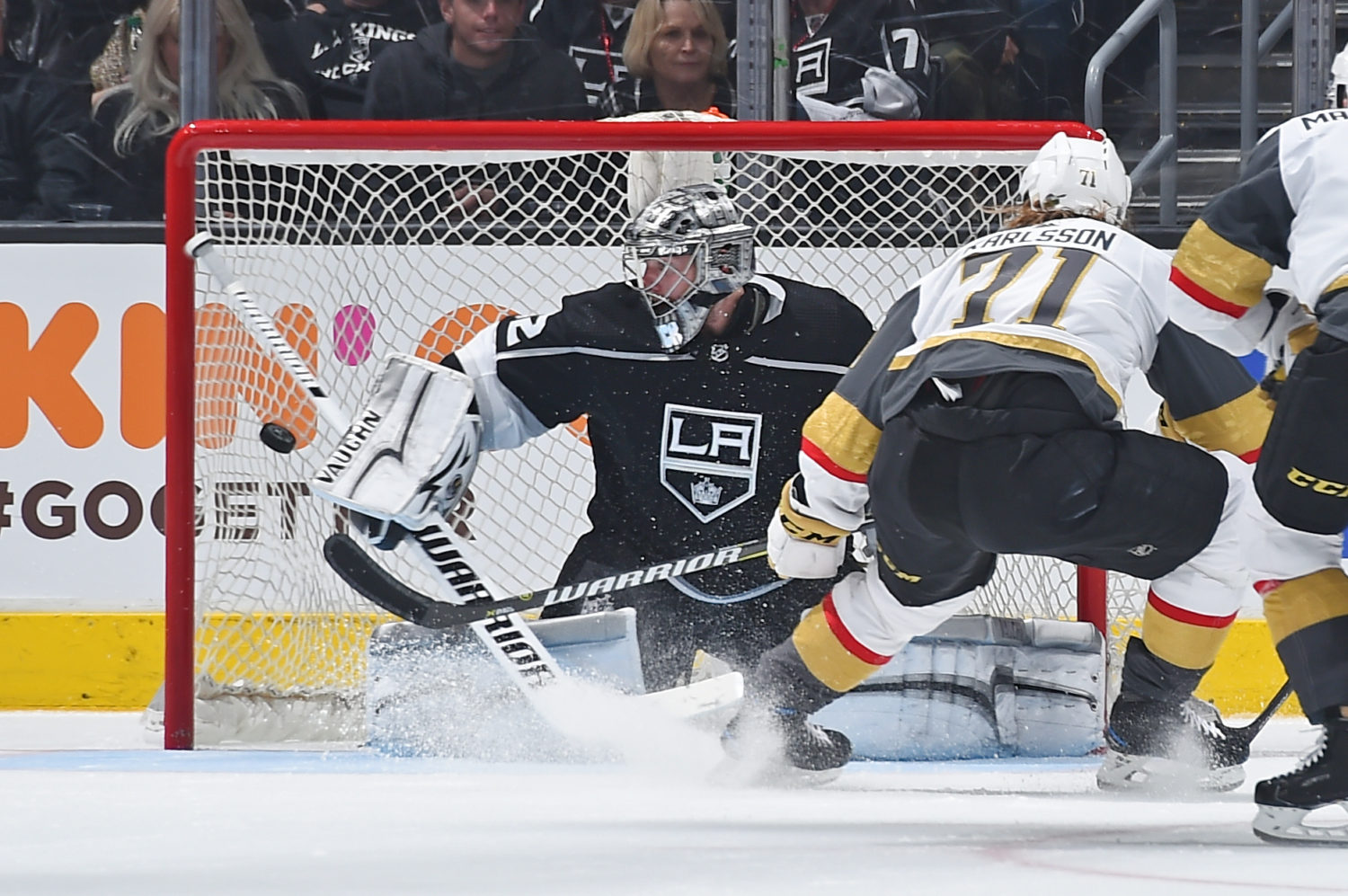 On what Adrian Kempe has shown in his first playoff run:
You know what, you get a young kid in that situation and come in and not be intimidated by the situation. You want him to come in and really try and make a difference, and I think he’s done that. Even down the stretch, in hard games where we need him to play hard, and they’re physical games, they’re tight checking games, I’ve seen him come in and use his assets where he uses his speed and his smarts, but he’s been a really competitive player for us, and I think he’s taken a real big step for a young player, and it’s exciting to see. [Reporter: With the way he’s playing and his speed, is it just a matter of time before a goal will come for him?] We just want him doing the right things and getting to the right places on the ice and creating the right opportunities and playing the game the right way. You can use the other players as an example – Kopi, Carts. I had Carts as a young player and he struggled scoring at the start of the year, and I told him to worry about checking. He ended up with 46 goals that year playing the game the right way, and I think Adrian’s an example of that. He’s going to score in the league. We want him playing the game the right way, being on the right side of pucks. He creates with his speed, he’s had some opportunities where he’s really created with his speed coming into the zone. We had a play the other night where Tyler Toffoli, you give him that puck 10 times, he scores at least nine times off that play that Adrian created with his speed. So, he was at the net, stopping at the blue paint, doing all the right things. If a guy wasn’t getting to the tough areas, you’d be more concerned. We think Adrian’s playing the game the right way. It’s just a matter of time before his production is going to be there.

On whether Kempe has always played a physical role:
I think with a young kid with confidence, with physical maturity, you’ll see that part of his game, and we felt all year that there were long stretches during the year where he was our best forechecker. He’s a kid that’s got good size, he skates extremely well, he’s an intelligent player, he gets sticks on pucks that get plays stopped up and he uses his body to push people off pucks. I just thought it was a really good response. We’re trying to get more zone time, we’re trying to establish more on our forecheck, and I think he took it upon himself to be a leader in that area.

On whether aspects of Tyler Toffoli’s game apart from scoring have been present in this series:
Well, we charted chances. That line had 10 or 11 chances the other game. It’s not often you see that. We’re in the results business now. We need results, but again, Tyler, I think they’ve been getting looks at the net by getting to the tough areas and finding the puck on their stick in the areas where they can have success, but just like we talked about with Adrian, I think the ability to get pucks in those areas is going to come from the ability to win battles along the boards. Ty, when he’s really on his game, he’s the best guy on the wall coming out of your zone. He makes a lot of plays that lead to either rush play or zone play, and I think that’s an area of his game that’s been a little inconsistent. But, I think it’s coming.

On what the Golden Knights have done well in this series:
If you look at their record and you see the amount of goals they’ve put in the net this year and you think of the of an offensive team – and they are – but they have good team speed and they play fast, and that applies to the checking side of the game, as well. I think they do a good job getting over top, they get five people back in their zone and they’re a very committed hockey team both in a checking sense and in getting in front of pucks. They’re a good team. They won the Pacific Division for a reason. Our games through the whole course of the year, the seven games have been all tight. But, they’re a good team for a reason. They won the Pacific Division for a reason, and we just have to find a way to get a little more, give a little less and be on the right side of these close games.

On what happened in William Karlsson’s goal off a faceoff in Game 3:
You can go back to a lot of it. We iced the puck off a neutral zone faceoff. That led to a faceoff in our zone. Then we iced the puck off a faceoff coming out of our zone that led to a third faceoff on that play. This time of the year, details are critical. One bad stick position, one bad penalty, one play beat off a wall can be the difference in the game. They run a faceoff play with Karlsson. They’ve got two guys that take faceoffs on that line – Marchessault and Karlsson. Karlsson lines up as a lefty on that play. He’s always looking to jump and shoot, and they’ve probably scopred more goals off of Karlsson getting that puck in behind and shooting off the centerman as a pick there. In that case, Smith jumped off the mark and beat us to a loose puck. That’s a play where we got beat off a mark, and they took advantage of it. It’s just detail on a faceoff at a critical time that cost a goal and put the game out of reach. [Reporter: Uncharacteristic of your team overall. Jennings Trophy award and all that.] Giving up three goals in the first period is not something we’ve made a habit of. All three goals, in our opinion, came off plays off walls. Those are areas that you have to be really good at, and we need to get better at. It happens through the course of a hockey game. Like at critical times, you really have to bear down and prevent those situations from happening, and if you’re on the right side of pucks and there’s a little more sense of urgency in your game, all three goals came off a forecheck play off the wall that ended up in our net. A rush play off the wall ended up in our net, and that was a puck recovery off a faceoff that ended up in our net. So they all came off the wall. Dot-to-board game is a really important part of the game at this time of the year, along with a lot of other things. You look at a football game, what’s the first place you look? You look at the line of scrimmage, right? Well, you don’t have to look too far in hockey, either.

On whether Drew Doughty is playing “as well as he can”:
I think Drew’s been a factor every time he’s dressed for us this year. I think he’s had an outstanding year, I thought he came back after sitting out there and really tried to make a difference for us. He has the ability to defend the top players, and he has the ability to really transport the puck up the ice in a hurry, and he’s the first over the boards in every situation you can define. He’s an important guy on our team, and I think he’s had a tremendous year. [Reporter: Has he had a tremendous series so far?] I think he’s been good. I think he’s been good. He’s only played two of the three games, and the one game that we didn’t have him was a five-period hockey game. I think Drew has been what we think Drew should be.

On whether approaches differ between the teams trying to close out or extend a playoff series:
Well, we use the term that if there’s time on the clock, there’s time to win, and there’s lots of time on the clock. If you look at Vegas and you look at us, we’re in the same situation. We both have got to win a hockey game to keep moving on. So, I think the situation’s the same. Psychologically it’s a little bit different, but we’ve been in the game a long time. We’ve got guys that have been in this situation. I’ve been up three-nothing and lost, I’ve been down three-nothing and won. I think I’ve been in every scenario you can imagine, and momentum is a dangerous thing, and all you’ve got to do is focus on the game in front of you, and that’s if you’re up in a series, as well. You can’t get too far ahead of yourself thinking about what comes after this, and it’s the same when you’re down in a series. You’ve got to focus on the tast at hand and what you can do to be a better team and what you can do to influence the outcome of the hockey game. The great thing about playoffs, you can’t wait for anybody else’s help. You’ve got to help yourselves, and you’ve got to win a game to keep playing. We’ve got to win a game to keep playing.