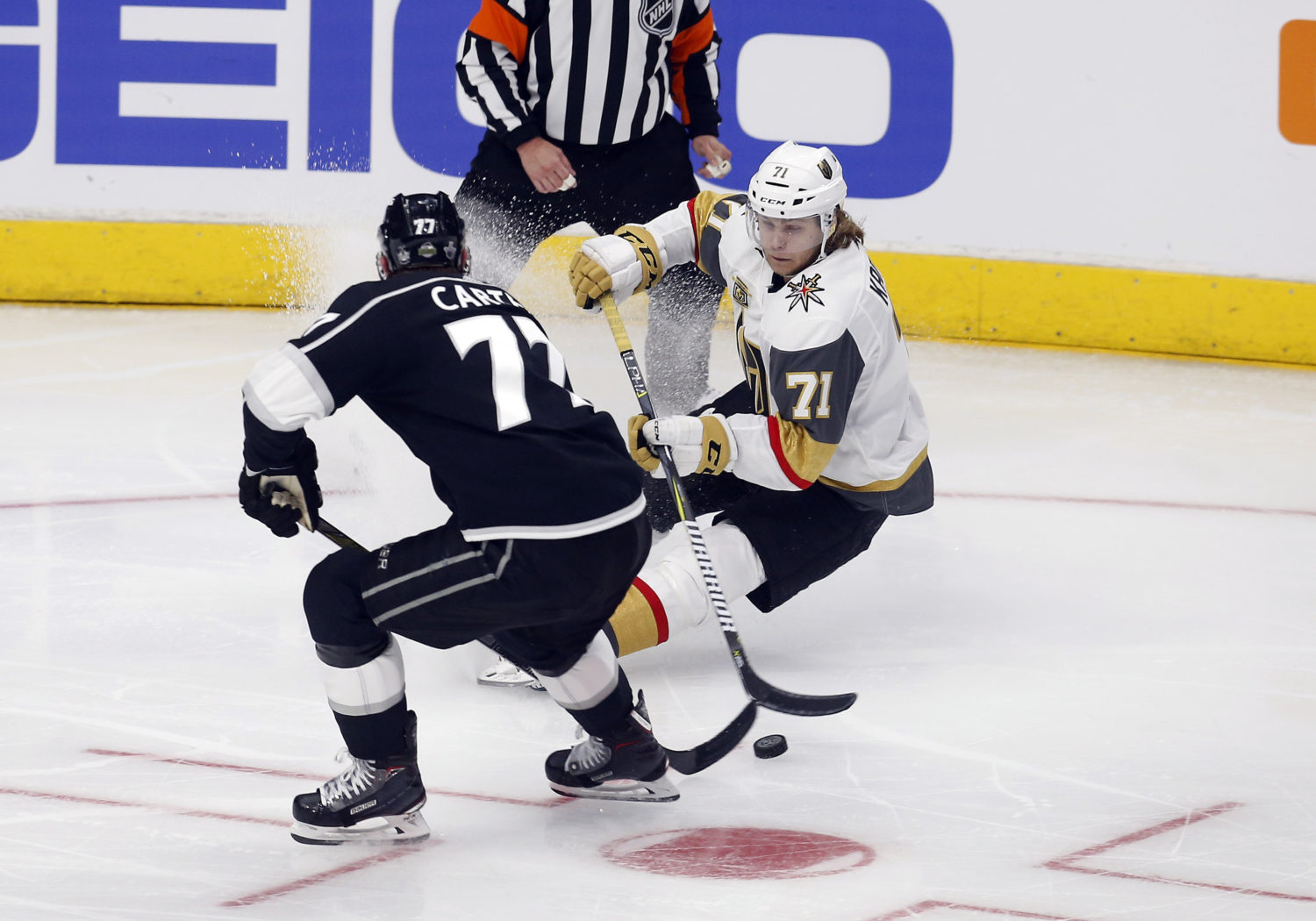 John Stevens took questions on a number of topics after the Kings’ optional practice Monday at Toyota Sports Center. Quotes on supplemental discipline, That 70’s Line and Jake Muzzin will be withheld for stories later today. Here’s the remainder of the transcript from today’s media session.

On how key wall play is to winning a hockey game:
This time of year there’s not a lot of ice out there, and wall play in all three zones usually dictates possession. If you look at the goals last night, all three plays came off a wall. The first goal we scored came off a wall, a puck recovery. If you look at power play, penalty kill situations, you can talk about schemes and movement and everything you want, but at the end of the day, you need the puck to do anything, so puck recovery usually ends up being a bit part of it. It’s always a factor, it’s a factor all year long, and it becomes more of a factor this time of the year. It’s usually reflective of the competitive nature of a hockey game, and I thought we did a good job of that last night. We had some critical errors at critical times that ended up being the difference in the hockey game. It’s an area we’re going to have to continue to improve on.

On whether the team can draw on their accomplishments from 2014:
The only thing I’ll say to that – I said this last night – I think this group does a really good job when there’s time left on a clock, there’s a chance to win. There’s lots of time on the clock in my opinion. This group, they can handle adversity. They showed it this year and they’ve certainly showed it in the past. The entire group wasn’t the group that was here in ’14. To relate it to ’14, saying ‘well, we did it then, we can do it now,’ this is a different group, so this group needs to perform as a group that we have here. We have guys that were young guys on that team that are veteran guys on this team that we need leadership from, and we have young guys here that are getting established kin the league quite frankly. A couple young guys I thought played really well last night in Iafallo and Kempe. I thought they were tremendous. We’re going to need that and more from everybody in order to climb back in the series. [Reporter There are 11 guys on this team that were on that ’14 roster, though. That’s got to mean something, right?] Well, I think any time you’ve been down that road before, even this year, there was a lot made that if you don’t score the first goal in a hockey game – you want to score the first goal in the hockey game, but this group didn’t let that affect their focus on trying to win a hockey game. They focused on the time in front of them, not the time behind them, and they were able to make a big difference. I think it was close to 20 games we won after giving up the first goal. We look at this situation the same. We didn’t get the series where we wanted at this point, but there’s still time on the clock, and we still think the that the time we put in in first three games does have an effect on the next game. Our focus right now is the game in front of us. Learn from the games behind you, but we know we need to play better. I thought we got better in some areas last night, but we know we’re going to have to be better. The series has been close, but we want to be on the right side of being close, and that’s going to take a little more from everyone.

On whether anything from Game 3 stood out after re-watching the game:
I felt it was our best game of the series. I still feel like that, last night. I thought as the game wore on, we created more and more. Got a lot more pressure on the puck. I still think there are some things we can do better offensively to create some more opportunity at the net. I think there were times last night where we had good zone time but never got the puck to the net, and I think we can do some things to enhance that. They’re a good team and they’re going to create. They’re really good on special teams both sides of the puck. I mean, they’re solid in all areas. They got chances last night. I think a lot of their chances came out of D-zone play. They’re really good at coming off walls and using the back side of the ice. I think we can do a better job there, but my feeling coming out of the game last night was it was our best game of the series, and after watching it again, I feel like it was our best game of the series.

On whether Vegas’ ability to play four lines kept them fresher later in the game:
No, I don’t think so. I thin kthere were some critical errors. If you look, they use their fourth line a little bit like we do. Carrier didn’t play a whole lot, but Bellemare and Nosek are primary penalty killers, and they probably had five or six minutes on the penalty kill last night, so that’s probably where a lot of minutes come from. We’re not afraid to play the four lines, and we get in situations, depending on what’s going on in a hockey game, special teams. No, I wouldn’t say that was a factor in the game, fatigue. I would say there were some critical errors at some critical times that may have cost us even with Kempe on the ice for the faceoff goal. I mean, he does a great job winning the faceoff. We just got beat off the line, and the puck ends up in your net. Credit to them, and not so much credit to us on that play.

On whether Alex Iafallo and Drew Doughty’s legs were fresher in Game 2:
Well, physically, you’re stating the obvious. They didn’t play 40 mintues two nights before, and having not played in that situation, they probably came in a little bit rested. I thought guys like Kopi that played big minutes had really good legs in that game. I didn’t see it as a factor on the back end. Muzz came in too, hadn’t played. He’s a guy that has fresh legs. But Adrian Kempe played in that game, and he was moving pretty well in that game. I think this time of the year you’re going to rest and get the rest you need, and you’re going to be ready to play the game. So, I think both teams have taken advantage of the day in between to try and get their athletes rested so they can perform again, and I didn’t see it being a factor lasts night.

On any difference in approach between teams trying to close out or extend a series:
I’m not sure, to be honest with you. I think there can be some real psychological things that come into play on both sides of it. We’ve always taken the approach that when you’re up in a series and you’re trying to close it out, you’re still focusing on one game, and if you’re down in a series, you’re still focusing on one game. The great thing about the playoffs, if you win your last game, you keep playing, and that’s whether you’re up in a series or down in a series. I’m sure they’re going to come out and really try to put a big push on and not extend the series, and we’re going to come out and try to play our best game knowing that we have to win the game in order to move on. You can look at it both ways. I think the teams that stay in the moment and focus on the game that they’re in and not focus on what might or might not happen is the team that can have success in that situation.