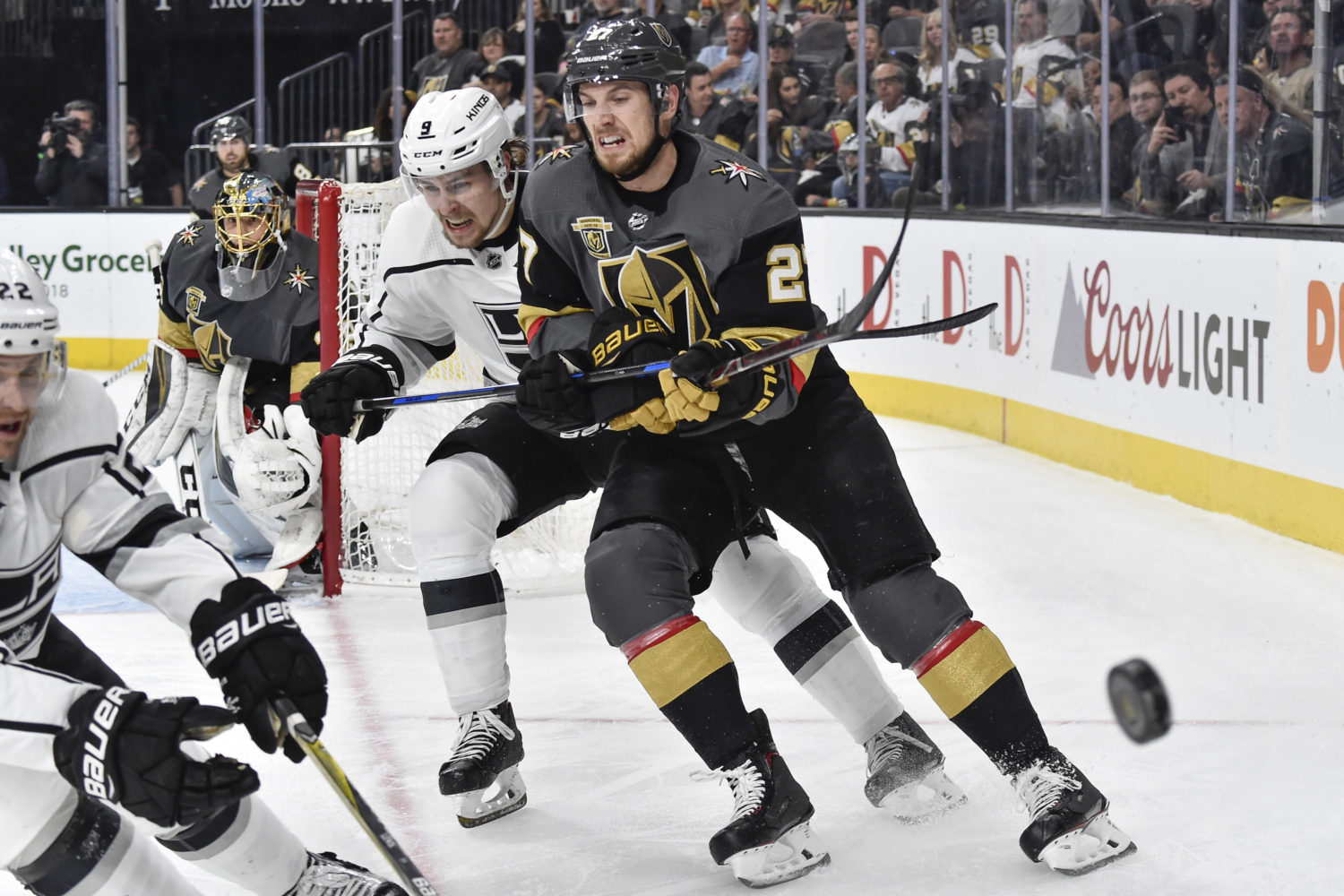 The LA Kings reconvened at Toyota Sports Center on Saturday morning as their first round series against the Vegas Golden Knights shifted back to Southern California. There was a late arrival at LAX after the double-overtime game, so meetings, workouts and video sessions were pushed back to accommodate the needed rest and recovery.

“Just got the guys in, get ‘em regrouped, get the recovery resources they need,” John Stevens said. “I talked a little about game plan. We had two games on the road there where we were close in both games and had an opportunity to win but didn’t. We need to climb back in this series here tomorrow.”

The ice was absent of players during media availability, so a better sense of the Game 3 lineup will be learned at Sunday’s morning skate.

Such a schedule is essentially par for the course at this time of the season.

“I mean, really nothing different,” Jeff Carter said. “Obviously, you get the fluids into you and we got in here and got moving a little bit. You know, got a lot of guys that have been through it before. Nothing new for us, so get ready to go.”

Meanwhile, before Vegas’ team flight to LAX, it appeared there was some additional focus surrounding agitating skilled forward David Perron, who is yet to play in this series.

David Perron said Saturday he hopes to play in the series vs. LAK. Gallant believes Perron will play at some point but is still undecided on whether he's going to be available for Game 3 Sunday.

Jeff Carter, on the challenges Vegas has presented in the way they approach the game:
I mean, they’re a fast, highly skilled team and I think that we’ve seen that the first couple games here. They play a really solid team game. They always have guys back in the rush or sort of on defense. There’s not a lot of holes in their game, and we need to up our game here to create some more chances.

Carter, on whether limiting Vegas’ chances off the rush is something that the team has done well:
Yeah, I think guys have done a really good job. I think our Ds have done a really good job of kind of standing up and creating good gaps. You know, like I said, they’re a quick team, they’re a highly-skilled team. They’re going to create opportunities, but I think for the most part we’ve done a pretty good job at that. When there are times when there are little breakdowns and they get a chance, Quickie’s been there for us.

Carter, on whether the team has been putting enough pucks on net:
I think that’s an area that we can definitely improve on. Like I said earlier, they’re a highly-skilled offensive team. They’re quick, but they have a strong defensive game as well. If you watch, they’ve always got a third guy back and they don’t give up a lot of odd-man rushes so that’s on us to get the puck in there and start grinding away.

Carter, on what the mood is in the room right now:
It’s good. I think guys are staying positive. This is nothing new for us, we’ve been here before. At the end of the day, we come home and we’ve got to take care of business at home.

Carter, on trying to generate more zone time:
Zone time would help, yeah. Just a matter of getting pucks in there and going to work. We know what we’ve got to do, and we’ll get back to it tomorrow.

Carter, on whether having scored only one goal in the past two games is surprising:
They’re a good defensive team. They’ve got a great goalie back there. We know we’ve got more. There’s areas that we can clean up and improve on that I think will hopefully translate to some more goals.

Dion Phaneuf, on areas in which the team improved between games one and two:
I think that you’ve seen through the first two game what was anticipated. It’s going to be a hard checking, it’s going to be a fast series, and I think that’s what you’ve seen. There wasn’t a lot of room on both sides and I believe that we’ve got to tighten up defensively. It’s on us defenders to really tighten up in the sense that we gave Quickie a little bit too much work and obviously he’s an incredible goaltender and he made some big saves to keep us in the game last night—I call it momentum saves, momentum swings, whatever you want to call it—but I thought Quickie was incredible for us, but we’d like to limit his workload.

Phaneuf, on how Oscar Fantenberg has acclimated himself to the playoffs:
I think he’s come in and done a really good job and am very impressed with his game. I think he’s added a lot to our back end and plays with experience. You can see that he’s an older guy, he’s not old, but I mean he’s got experience and I think that he showed a calming effect back there. He moves the puck very well and I think he’s been a really good addition to our team.

Phaneuf, on the ice conditions throughout last night’s game:
I thought they were really good. Ice held up well and the longer it goes the more it seems to get more and more chopped up, but I think that overall it stayed pretty good for us.

Phaneuf, on whether he can characterize what Vegas brings on the ice:
I think that if you look at Vegas, they had over 50 wins for a reason. They’ve earned respect in the way that they’ve played the game, winning hockey games, where they’ve finished in the standings—we’ve said all that. So, we know what to expect from them. I thought that we did a lot of good things too in the first two games. Obviously, we need a little bit more and that’s what we’re going to work on getting to. The bottom line is it’s a series. It’s not one game, it’s not two games. We would’ve liked a better outcome, but we come back here, we’re coming home, we’re playing in front of our fans. We’re going to use that energy and today’s about reload and get ready for tomorrow.

Phaneuf, on whether there are enough chances being generated on the power play:
I think we’d like to generate more and you always want to generate more, so that’s kind of a standard answer. But our job when you’re on the power play is to produce. Sometimes you’re, you’re not going to score every power play, but it’s about momentum and special teams on both sides of the puck. So, there’s areas we want to work on, without getting into too many details, but if there’s one area with our power play I think we’ve got to generate more pucks. And that’s especially on us in the back end. It’s on us to find lanes. Forwards work hard to get us the puck up top. It’s not easy to get it out of the corners. It’s our job as defensemen to find lanes and get pucks through.

Adrian Kempe, on the keys to sustaining more offensive pressure:
Well I think first of all, we’ve got to be better on the forecheck. We’ve got to have Vegas connected when there’s sometimes just two or three guys, we’ve got to have five guys to be successful in that areas. So that’s for sure. One thing we want to get better on and we have to get better on to create more offense. I think we had some yesterday in the O-zone. We didn’t get a lot of shots through, they blocked a lot of shots on net. And obviously we turn the puck over and they go the other way so that’s something that we’ve got to be better on too. I think that it all starts from the forecheck and having five guys connected to be successful in that area for sure.

Kempe, on if last night’s game was the longest he had ever played:
Yeah, it is. By far. I’ve gotten to a couple OTs, but never a second tournament in OT like that, so that was the longest game.

Kempe, on what sustained him through the length of Game 2:
I mean, obviously it’s a long game and it’s another full 20 and then we’re going to the second overtime. Obviously you’re tired and your head gets a little tired and you’ve just got to try and stay in it and keep your shifts short and I think everybody did a good job and we tried to keep the shifts short and work hard and put pucks on net and play simple and play hard. It’s tough, but it’s the same for both teams.

Kempe, any subtle changes between games one and two:
I think both games were kind of similar. I mean obviously both teams created chances and it was a tight game for 60 minutes. We wanted to get better after the first game obviously and I think we played well. We were not that far away, and they scored that OT goal so that was unlucky and we’re really unhappy with that, but I think there’s still some areas that we want to get better on. That forecheck is for sure one of the things and I think we’ve done a good job in PK and played a good defensive game through sixty minutes and we’ve just got to bear down in the O-zone to create more chances and score more goals.

On April 14, 1994, Dave Taylor returned from a concussion for the season's final game vs. EDM in front of a sold-out crowd. He took the opening faceoff and that was it … it was the last of his 1,111 games with the Kings … he played one second and was the game’s No. 1 star. pic.twitter.com/McVbSPEcUi