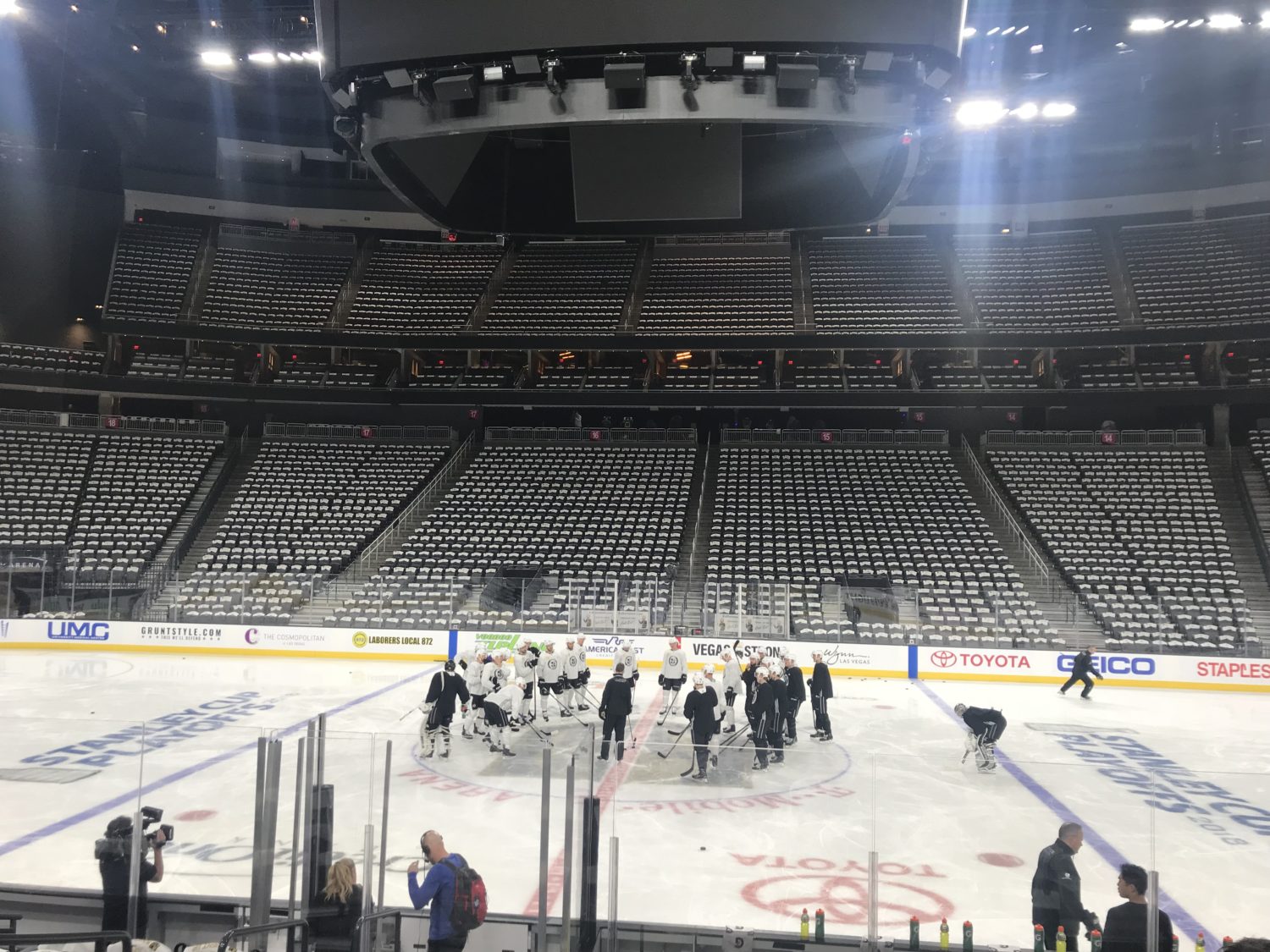 INSIDERS. In addition to the post-skate reaction from the Kings’ dressing room over the Drew Doughty suspension, the word on the street is that there is also a game tonight. Imagine that! In advance of Friday’s Game 2 at T-Mobile Arena (7:00 p.m. / Prime Ticket / FOX Sports GO / NBCSN / FUBO TV / KABC 790 / I Heart Radio), the LA Kings gathered at center ice at 10:30 a.m. and aligned thusly:

-In other words, apart from Alec Martinez (61 career playoff games played) and Dion Phaneuf (52), the other four players comprising Los Angeles’ defensive corps have played a combined five Stanley Cup Playoff games, led by Christian Folin’s three. And with Drew Doughty’s absence, Jonathan Quick and Dustin Brown will be the two lone players to have played in every single playoff game since the team’s return to the playoffs in 2010. Both will appear in their 83rd career playoff game tonight.

-Jake Muzzin is “doubtful” tonight, per John Stevens. Derek Forbort is not nearing a return.

-William Carrier was back on the ice for Vegas and is expected to play tonight. David Perron continued to skate but did not do so among the top four lines and is presumed out. The view from the aggrieved party:

Here's the full transcript from William Carrier's first meeting with the media following the hit that got Drew Doughty suspended for Game 2. pic.twitter.com/4hz5FVaGd2

No changes are expected to Vegas’ lineup.

-Alec Martinez logged a game-high 32:11 in Los Angeles’ 3-1 win over Colorado on April 2, and while the team – touch wood, as Darryl Sutter would say – shouldn’t be down to three defensemen as they were early in that game, he should see his ice time spike in Doughty’s absence tonight. A versatile defenseman, Martinez is the most dynamic of the Kings’ available blue liners, and with a skill set similarly defined to Doughty’s but without quite the same ceiling, is expected to absorb the type of role and many of the match-ups that would ordinarily be handled by Doughty.

“Obviously you know the task at hand, but I think that it’s important that you don’t overthink it,” Martinez said. “This is not about me, this is about our D-corps and our team. That said, everyone’s going to have raised responsibility, including myself, so I’m excited for it, and like I said, I have all the confidence in the world in this hockey club, and I know that we’re going to rise to this occasion.”

The team has won games without Anze Kopitar before – keep in mind the Kings put up a damn admirable fight in 2011 when Kopitar was felled by a broken ankle – and have endured extended stretches without Jonathan Quick and Jeff Carter. Tonight, they’ll rely on all players firmly committed to pulling the rope.

“Just approach it like any other game,” Dustin Brown said. “We’re lucky enough that we have extra players that can play, so we put Gravs in the lineup and we go. Not much else to it.”

Asked if it was as simple as needing more from the 18 skaters on the ice, Brown continued to hammer the point home.

“I think we need a lot more from 20 guys, including the back-up goalie, if we want to win games. I mean, Dew, I think he’s the best defenseman in the world. You’re not going to replace him with one player, but it’s a good thing there’s six guys on the ice at a time.”

-More Brown on whether Doughty “has been at his best” this season: “I’d probably say so. I think the thing that separates him from a lot of D is how hard he is to play against. I think if you ask a lot of guys on other teams, he’s not fun to play against. He has some big hits here and there, but it’s not generally a physical thing. I think those guys, for me it was Nick Lidstrom and Scott Niedermayer. They’re just positional players and can skate really well and they always make the right plays. I think Dewey has a little bit more cowboy in him than those guys do, but I think if you went around the league and asked guys, they don’t want to play against Drew.”

-Kevin Gravel will make his playoff debut tonight after 70 career regular season games, which included 16 in the 2017-18 regular season. A 2015 Calder Cup champion with the Manchester Monarchs, Gravel is capable of moving the puck at the NHL pace and relies on his skating as a significant asset. He got into two key games over the final two weeks of the regular season and will again be among the players to contribute to a strong team game.

“We’ve had eight defensemen here for quite a while now, and if you look around the league, Nashville’s carried eight defensemen all year. Vegas has carried eight defensemen all year,” John Stevens said. “We’ve had Paul and Kevin as extras for a while now for this exact reason. You know you’re going to need them at some point. They’ve been here, they’ve had some experience in games. Say what you want, the games down the stretch were critical games, much like a playoff atmosphere. We look at it as a real opportunity for these guys to come in and play and show us what they can do. Every kid wants to play in this situation, every kid wants to play this time of year. They’ve worked extremely hard off the ice to stay ready so they can help us in this situation, and as much as we’d love to have Drew in our lineup tonight – and we’d love to have him in our lineup tonight – the L.A. Kings are still forging ahead here. This is a big game for us, and the bottom line is aside from all that other stuff, we know we need to play better as a hockey team, and that’s the bottom line, and that’s what we intend to do.”

-Gabriel Vilardi’s Kingston Frontenacs have seized control of their second round series against the Barrie Colts with three consecutive wins and now lead the best-of-seven three games to two. (They are also tied, 1-1, at home in Game 6, which is currently being contested at Rogers K-Rock Centre, and by the time you’re reading this, this information will likely be out of date.) (Also learned: The K-Rock Centre is located at 1 The Tragically Hip Way.)

Vilardi has three straight two-goal games. It would be an understatement to say that there is excitement in the organization towards his promise.

Big time goal from big time player 👏@LAKings prospect @Gabe_Vilardi13 gets his 🔟🚨 of #OHLPlayoffs and now has 2️⃣0️⃣ points in 🔟 games for @KingstonFronts who lead #BARvsKGN 3-2. pic.twitter.com/sbLtOWRjbg

-I’m running out of time in advance of my pre-game prep, so enjoy the quotes from various players below. Game 2 is upon us, Insiders. Tonight’s officials are referees Kevin Pollock and Francois St. Laurent and linesmen Darren Gibbs and Matt MacPherson. Let’s talk soon.

Dustin Brown, on the importance of using the forecheck to establish zone time tonight:
It goes a long way into helping our D without Dewey back there to control the game. If we can a lot of time in their zone, that’ll really help us tonight.

Dion Phaneuf, on how to lessen the impact of absences on the blue line:
Dewey’s a huge part of our team, and that’s just stating the obvious. That’s being a realist. But the bottom line is injuries, suspensions, that’s part of hockey. That’s part of the game. All teams go through it. You never obviously want to have a guy like Dewey out, but the reality of the situation is we’re going to have to find a way without him tonight. It’s going to be by committee. Guys are going to be asked to do more, play a little bit more, and we’re going to have to do a job for him.

Alec Martinez, on his reaction to Drew Doughty’s absence:
Obviously it’s disappointment. He’s a huge, huge part of our back end and our hockey club. That’s what the league decided, so that’s what we’re going to roll with.

Martinez, on whether he agrees with the suspension:
It doesn’t really matter whether I agree with it or not. I’m not going to look to create controversy. I think it’s a hockey play.

Martinez, on how he approaches his upcoming heavy minutes tonight:
I think it’s important that you approach it just like any other game. This is playoff hockey. This is a must-win game. These are games you want to play in. We’re going to face adversity throughout the playoffs, an this is just one thing that everyone here is going to embrace the challenge. I have the utmost confidence that everyone in here is going to rise to the occasion.

Martinez, on whether the importance five-on-five play is heightened so top players aren’t taxed:
I think that’s the right approach regardless of what your lineup looks like. A team like this, you’ve got to limit their special teams and their power play opportunities. They’re really good at creating offense and bearing down on opportunities. Yes, that is the approach, but I don’t think that’s any different tonight than it is any other night.

Martinez, on whether his heavy usage at the end of the regular season was a “confidence-builder”:
Throughout someone’s career, they’re going to come across games like this if you play long enough. That was a bit of a unique situation losing a guy early and then we had two guys in the box. Something is going to have to go severely wrong tonight if we only have three D again like we did on that game. … I’m ready for whatever the game brings me. It’s playoff hockey. This is it, this is the big dance. 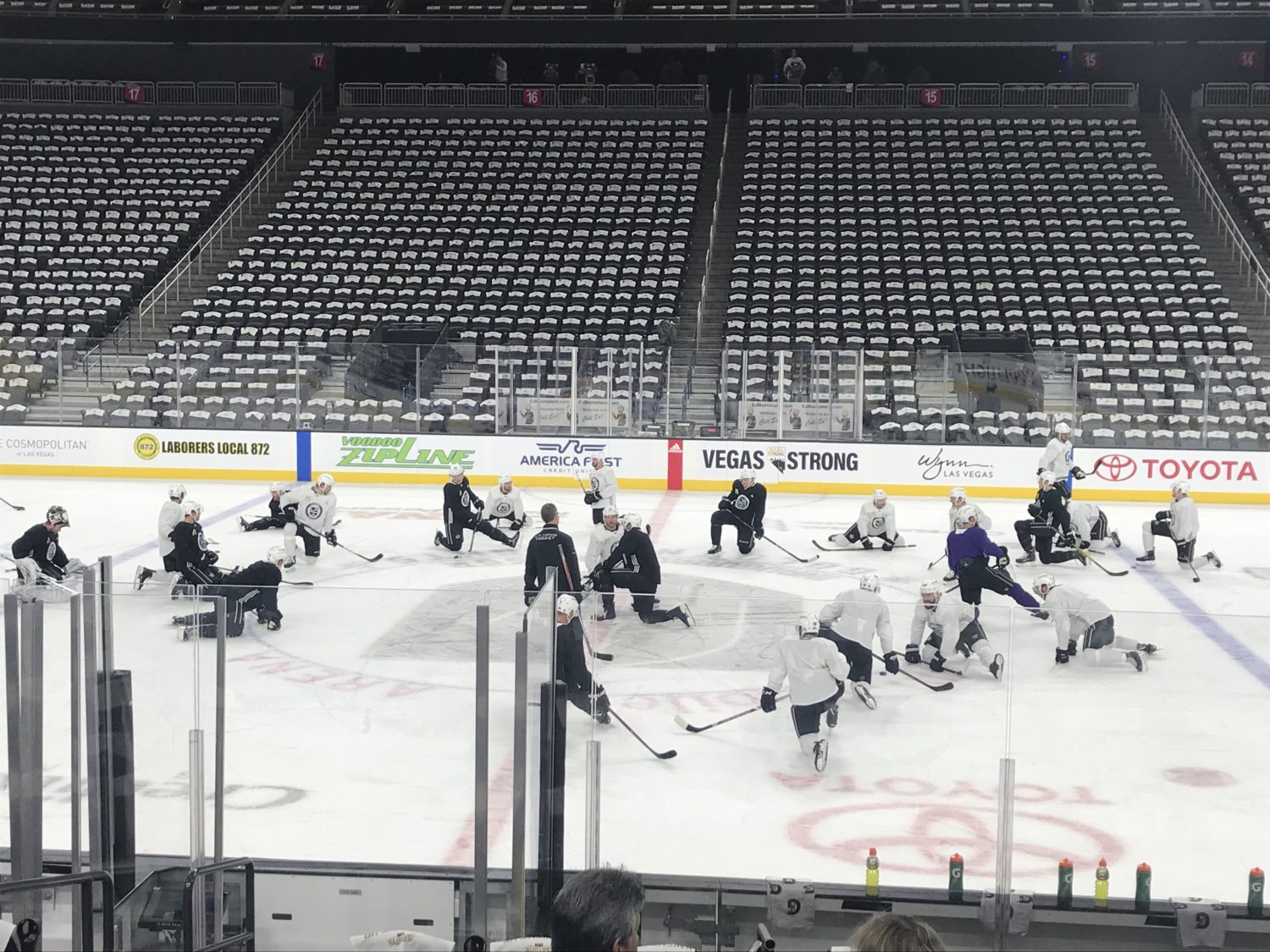