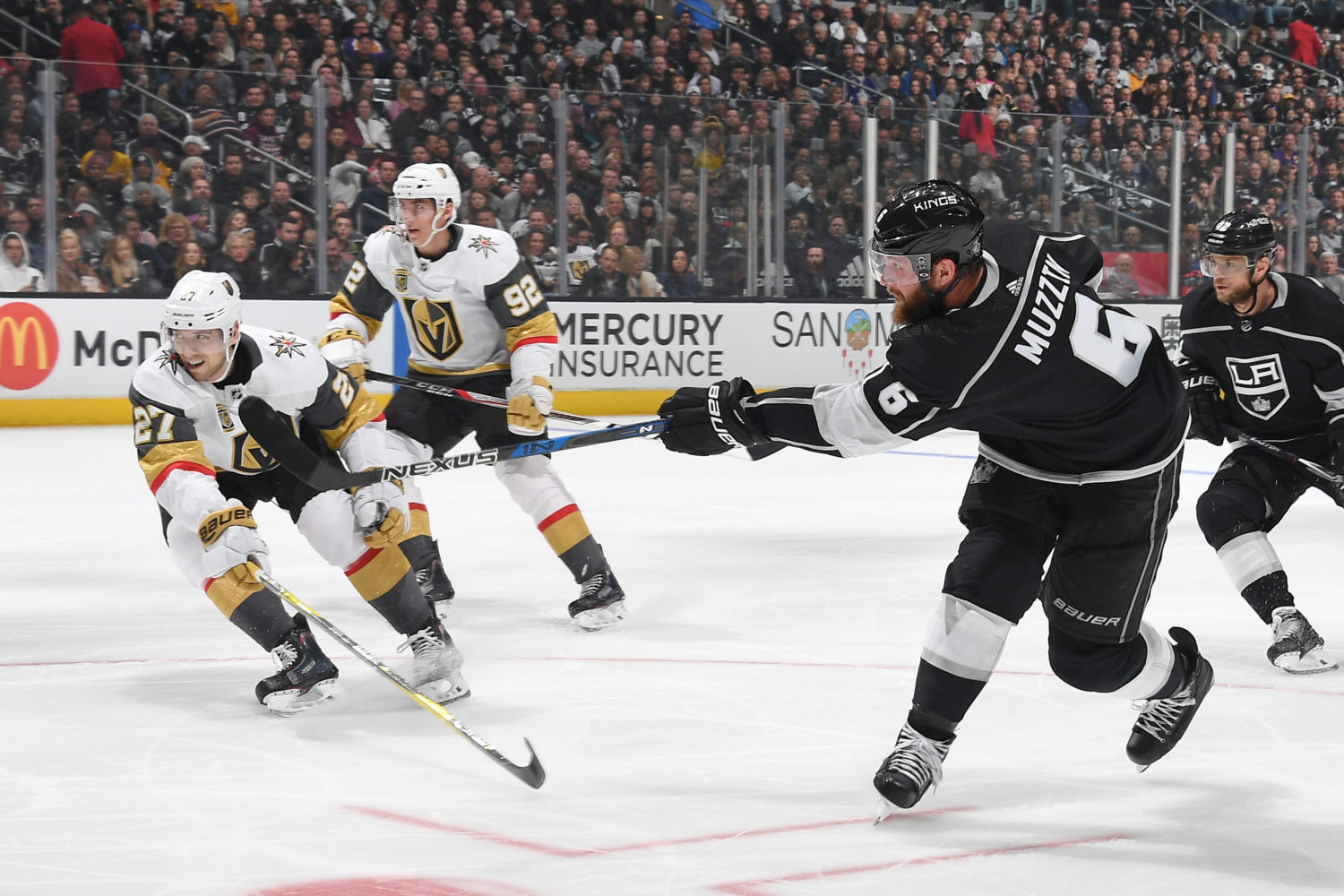 On Jake Muzzin’s availability for Game 1:
We don’t know yet. We got him in a couple practices here. It was really good to get him in practice from a timing standpoint. He’s been working hard to keep his legs going and really working hard to keep his energy up this time of the year, but it’s important as soon as a guy can practice to get him in practice, and we’ve had the luxury of a couple days of practice here. He’s coming along, but we’re not sure.

On whether Derek Forbort is “officially” out for the first round:
I don’t know if anything’s official, but he’s not an option to start the series, that’s for sure.

On whether Iafallo “looks good” for Game 1:
He looks good. I’ve still got to touch base with Kinger just to make sure, but Alex looks good. He looks like he’s got some good energy back and he looks like his normal self again, so indications for him are good.

On how Oscar Fantenberg played in his first game back:
I thought he played well. I mean, I’d like to take the play back where I thought he made a high-risk play coming around the net where I don’t think you need to take those types of risks. I think there were better plays to be made and a better decision on that play. We sat down and talked to Oscar about that. To me, there’s a big difference between a high-risk play and a high-end play. A high-end play is a player’s ability to make a play under pressure without taking on a huge amount of risk, and I just thought that play had way too much risk on it, as we found out. You don’t ever want to put self-inflicted wounds on your team with a situation where you get scored on. But I thought he responded in a really good way from that situation, and I thought he didn’t let it affect the rest of his game. I thought his gaps were good, I thought his support for his partner was really good. I liked his second effort on plays, and I thought he moved the puck really well. So, for a guy that’s been out down in the American League for an extended period of time, I thought he came back and played very well.

On the balance for game-planning for a playoff opponent while focusing on the Kings’ own game:
Everybody probably does it differently, but we do go through a lot of preparation, and the fact that we played Vegas four times and we played ‘em recently, we’ll use a lot of our own head-to-head stuff. We’re always aware there are lineup changes. I think it affects special teams a lot this time of year when guys are hurt, guys are out. Special teams may struggle at different times – different personnel go into different spots – so I think you need to make your team aware of it. But their style of play certainly hasn’t changed, and there hasn’t been a reason for it to change. They’ve been very successful in creating an identity out of the gate. We’re focusing on us and what we need to do to be successful against them, but we’re focusing on being ready to execute our own game plan while being really aware of theirs, as well. I think our guys are really good students of the game, and I think every team’s going through the same thing. You’re not trying to alter your game too much based on your opponent. You’re just trying to make sure your game’s in order and you’re aware of your opponent and what their tendencies are, and we’ve certainly done that.

On whether the Kings’ first period struggles will change their approach at the starts of games:
No, this is something we’ve talked about a lot this year. I think the one approach is we’ve taken a real awareness to managing the puck early in hockey games, and like I’ve said, we’ve had some really good starts to games. I love the way we started the game the other night. I thought we were dialed in ready to go. I thought we were doing a lot of good things, and we just had some really costly mistakes based on decisions with the puck that put us in a situation where we were trailing in hockey games, and that’s something we need to avoid. We can’t put ourselves behind in a hockey game when there are situations clearly we can control better, and that’s just managing the puck better. Playoff time, I’m not worried about guys being ready to go. Guys could’ve played yesterday. Guys are chomping at the bit ready to go. Vegas is a tough building, so you’re going to have to be ready to go. I think the other part of that that comes to play is just discipline early in hockey games. You don’t want to be not moving your feet, not having detail in your checking where you’re forced to take penalties or you turn pucks over and you’re forced to take penalties, which leads to the situations you’re referring to. To me, the game plan hasn’t changed all year. The execution of the game plan early, obviously you don’t want to play from behind in the playoffs. The good thing about this team is that they don’t let one incident in a hockey game, if it’s a goal early, give away the next 50 minutes. We find a way to get back in it. But clearly, you don’t want to play from behind in the playoffs and make a habit of it.