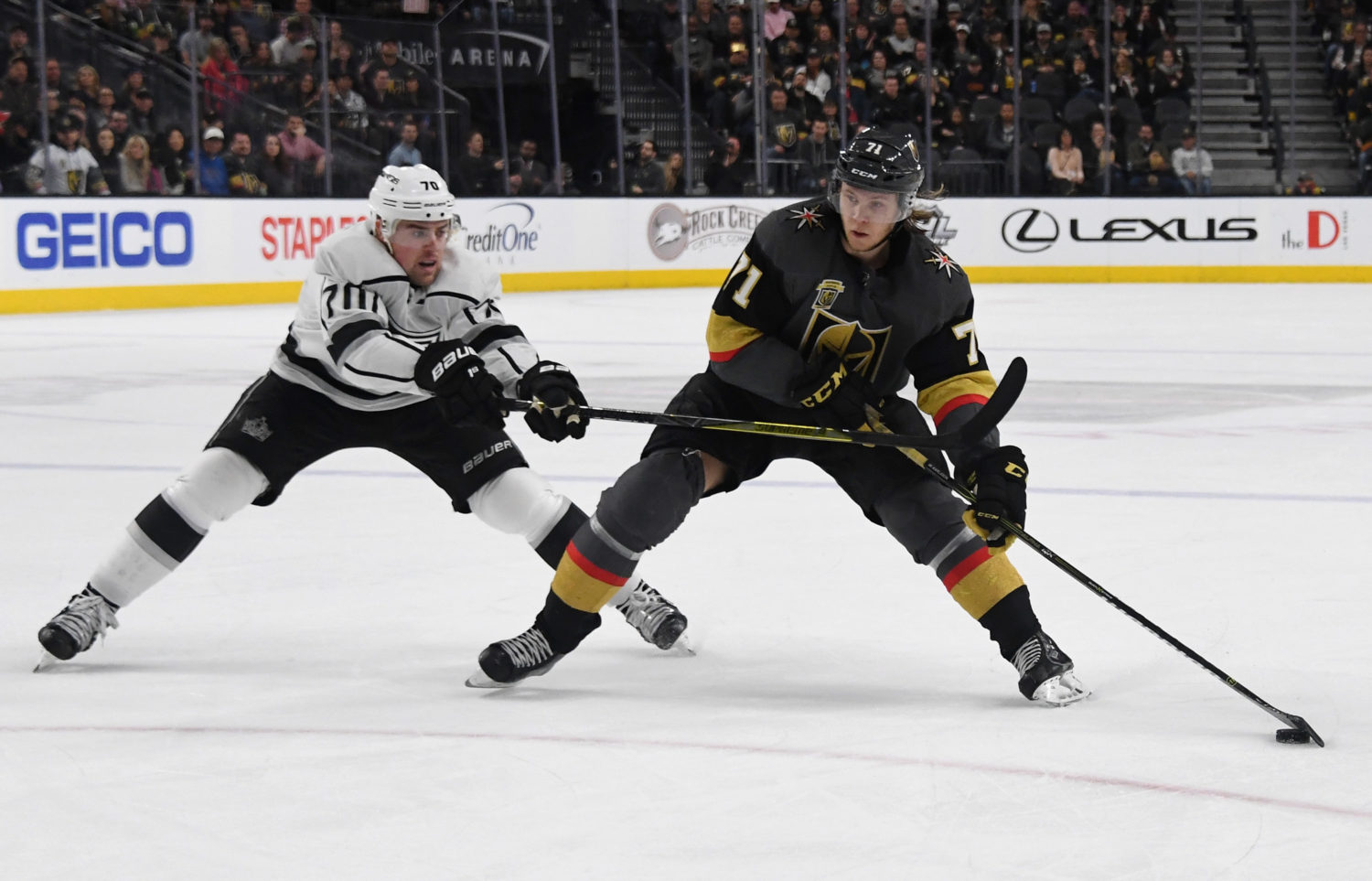 -Defensive pairings were the same: Fantenberg-Doughty, Martinez-Folin, Phaneuf-LaDue and the Brickley-Gravel-Muzzin hydra. Muzzin wore a red no-contact jersey for the second straight day; we won’t get a better sense on his Game 1 availability until Wednesday’s morning skate at T-Mobile Arena. (Click here to hear what John Stevens said about injuries earlier today.) With regards to Muzzin, it does not help that the Kings start on Wednesday, as opposed to Thursday. Other series beginning tomorrow: Philly-Pittsburgh and Minnesota-Winnipeg. It is a glorious time of the year, Insiders.

-In the least important bit of news uncovered today, the Kings didn’t have one player named as one of the NHL’s weekly or monthly three stars. Weird, right? Players from 28 different teams were named as one of the three stars of the week or the month, but before you start sharpening your pitchforks and preparing your vocal cords for an assault on the embedded east coast bias, the other teams whose players were never named to weekly or monthly awards were the New York Rangers and Detroit Red Wings. Original six teams, at that. Not even the four-goal Anze Kopitar or Dustin Brown performances earned them third star recognition. ¯\_(ツ)_/¯

"I look to a few former teammates like Kopitar and Brown and they had great bounce back seasons. There are ways to bounce back, but it is all on me. I'm not giving up on myself. I have to find my confidence again and be the player I can be." Lucic #Oilers

-Several notes to pass along: Nick Nickson and Daryl Evans will host a 30-minute post-game Kings Talk on KABC 790 following Game 1 at T-Mobile Arena. Daryl and I will also host video previews on game days after the morning skate, so be sure to keep tabs on LAKings.com/video. (I’ll post them here, as well.) There are watch parties throughout Southern California at Dave and Buster’s. Game 1, Wednesday night, will be at the Hollywood and Highland location: 6801 Hollywood Blvd, Los Angeles, California, 90028. Game 2 is at the Westchester Dave and Buster’s, located at 6081 Center Dr, Los Angeles, California, 90045.

-Gary Bettman, on off-ice official Gary Evans, who worked his final game on Saturday against Dallas: “Gary Evans has represented the National Hockey League and the game of hockey with class, integrity and dignity. On behalf of the NHL we congratulate Gary on his 34 years of work as an off-ice official in Los Angeles and wish him the best in his future endeavors.”

-Anze Kopitar, on the teams in the Pacific Division, similar to Vegas, that may also thrive on a puck-hounding game that results in speed, transition, and often a disproportionate number of rush chances: “I think Calgary and Edmonton are somewhat similar. I wouldn’t throw the Sharks or the Ducks in that mix – they’re more like us with a little bit more control and not trying to transition real quick. I mean, maybe Edmonton and Calgary come to my mind.”

-ACTUAL REPORTING-LIKE SUBSTANCE. So, you may have noticed that William “Wild Bill” Karlsson, who had scored three, nine and six goals in his previous three NHL seasons with Anaheim and Columbus, exploded onto the scene and cracked 40 this year for the Golden Knights.

“Scoring 43 goals is certainly alarming,” Anze Kopitar said. “I think he obviously had a really good season, and so did the rest of the team, too, so I don’t know if you can single him out, but at the same time you definitely have to pay attention when he’s on the ice. He plays in pretty much all the situations for them, and we’re going to have to make sure that we make it hard on him, because he plays a lot of minutes, and we want to make sure those are hard minutes.”

While Vegas’ strengths lie in scoring depth and their ability to roll productive, bought-in lines with good speed and the ability to turn plays around quickly, the Golden Knights do have a standout top line, as well. Karlsson, Jonathan Marchessault (27 goals) and Reilly Smith (22 goals in 67 games) flank Karlsson as part of one of the most equipped lines in the league to cash in on rush opportunities.

In other words, the Kings can’t get beat by some of the puck management issues that plague virtually all teams but certainly crept into Los Angeles’ play at times this season.

“We’ve been talking about this all along,” Kopitar said. “They’re a very speedy team, and they transition the puck really well. We’re going to have to make sure that we have numbers coming back, first and foremost, and not doing anything where they get chances off our mistakes. Listen, they’re going to make plays because that what good teams do, and they’re a good team, so there will be that odd-man rush against us. But we just have to limit that.”

Because of their scoring depth, the Golden Knights may not necessarily be overly reliant on match-ups while they have the last change. In any case, the Kings, whose one-two punch of Anze Kopitar and Jeff Carter at center is among one of the team’s core strengths, have a pair of dynamic and responsible two-way centers who should be able to give players like Karlsson, as well as 29-goal man Erik Haula, a harder time than most center consortiums across the league.

And when the match-ups do come into play, there’s also Adrian Kempe, who has been praised this season for how he matched up against elite Pacific Division centers – hello, Connor McDavid, hello, Sean Monahan, hello, Ryan Getzlaf – in Carter’s absence.

“When Johnny and and those guys trust me against their top guys, I think that’s a good part, and I think that’s growing a lot of confidence in my game as well,” said Kempe, who was praised by John Stevens on Tuesday for his “big heart” as well as his responsible and competitive play in Carter’s absence.

But, there’s also a reason why Karlsson was a +49 on the season, a rating that no other player was within +13 of.

“I haven’t paid a whole lot of attention to what’s going on around the league in terms of awards, but you’d have to think his name’s in the Hart Trophy [consideration] because he’s had that type of year, and it’s been phenomenal,” Stevens said. “He’s been on a couple teams and put up very modest numbers, and you could say his numbers this year are gaudy compared to what he put up before. But when you watch his game, you have a real appreciation for how good he is. They play him against top guys, I think he’s about a plus-150 this year, isn’t he? So, he plays a responsible game, he’s really hard on pucks, they use him to kill penalties. They use him like we use Kopi – they use him to check top players, they’re not afraid to trust him in any situation, and he’s got some skill that you can’t teach, and he scores goals that others can’t. He’s had a tremendous year, and he’s an elite player that we need to be aware of.”

-It’s not really apropos to the playoffs, but here’s an interesting conversation between Jim Fox and Adrian Kempe that illustrates how the Swedish rookie sees the game and verbalizes how he digests such fast-moving play in real time. I’ve loved this Inside the Play series.

Anze Kopitar, on a strong regular season, and how he’ll look to elevate his game in the playoffs:
Just do more of the same that I was doing during the regular season, really. Just play my game. I’ve been here before, I’ve had some decent success in the playoffs, too. But, right now it’s about winning games. It doesn’t matter how you do it, it’s a matter of winning, and that’s what’s so good about this time of the year. I don’t think as much focus is on individuals’ numbers and skill and everything. It usually comes down to the team game, and that’s what we feel very strongly about, and that’s always been our M.O.

Kopitar, on Vegas’ play without the puck:
I wouldn’t say they’re the most physical team in the league, but it’s certainly their speed and quickness and aggressive style of play that they get the pucks back. In that regard, we want to make sure we manage the puck right and not throw it away for no reason and obviously play with it and make them defend as much as we can.

Beautiful day in Vegas for a run along the Strip.