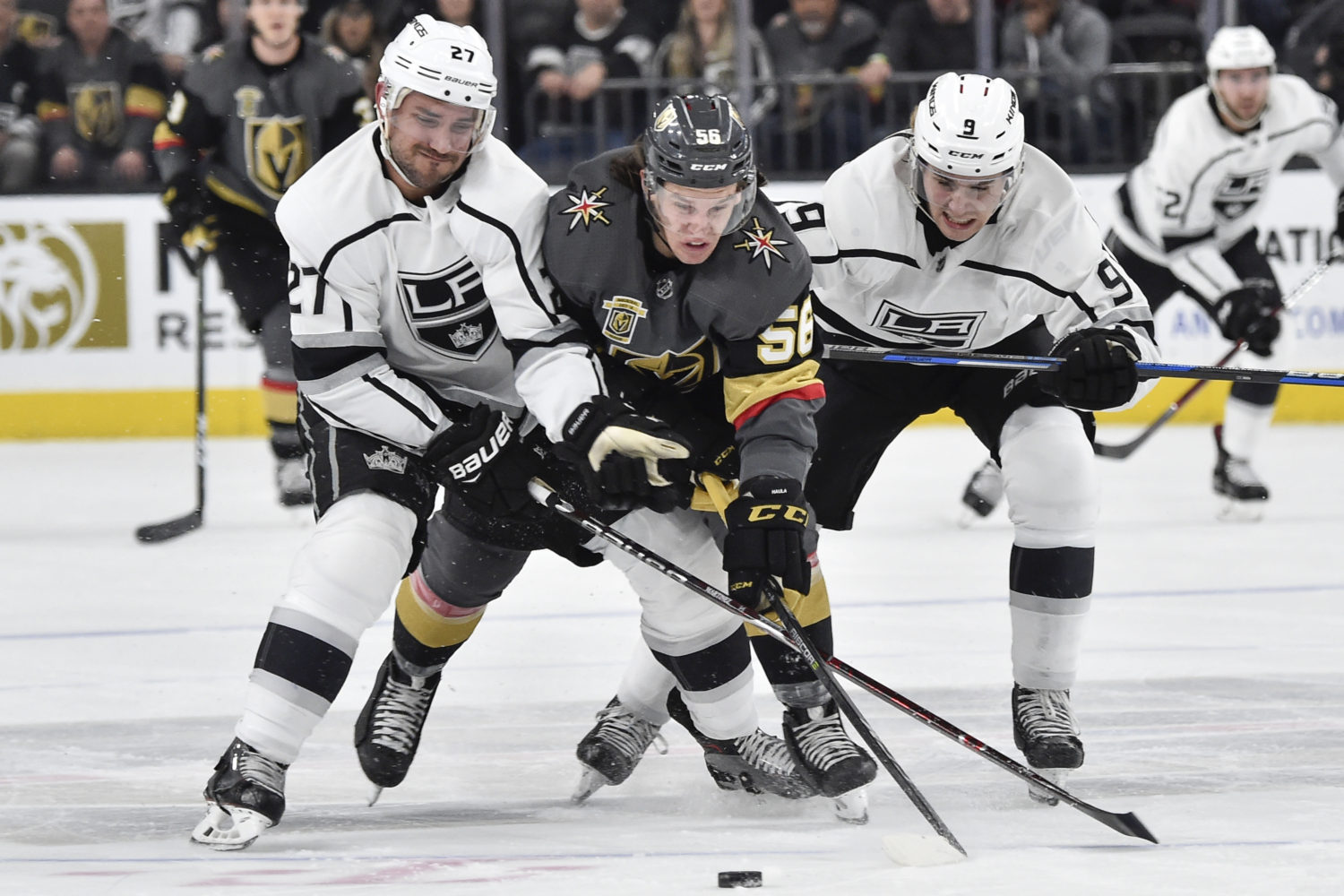 With Los Angeles’ regulation loss to Dallas on Sunday, the Kings claimed the first wild card berth with a 45-29-8 record and will match up against the Pacific Division champion Vegas Golden Knights in the first round of the Stanley Cup Playoffs. The schedule is expected to be announced after the conclusion of Sunday’s Boston-Florida game and could feature a Wednesday-Friday start at T-Mobile Arena.

“We looked at the Pacific Division in general, and there are no easy match-ups,” John Stevens said. “We didn’t wish for anybody because every team has its own set of challenges. But Vegas has had an unbelievable year and they’re a team that’s extremely deep. They play fast. A lot like our building, they have a lot of energy in their building. They’ve been really good at home and they score lots of goals, so it’s a good challenge for us. We’ve been saying it all year. We need our whole team. We can’t go in there with two lines and expect to win. It’s a good challenge for us. Obviously, the travel is close and the whole Pacific Division with all the California teams in it and Vegas not far away. It’s going to be a tough challenge, but I think the two games that we had, the back-to-back not that long ago had a real playoff feel to it, but I think it’s a little bit of a reference point of what to expect in a playoff series.”

The Kings faced the Golden Knights four times over the course of the regular season and posted a 2-1-1 record in the series, with two of the games going into overtime.

In the first game of the series, played on November 19th, 2017, Los Angeles fell to Vegas in a 4-2 loss punctuated by an empty-net goal.

In the second game of the series, Doughty’s late third period goal forced the game into overtime, but David Perron’s winner resulted in a 3-2 overtime defeat for the Kings.

Most recently, the teams met in a back-to-back set, the first of which took place on February 26th at Staples Center, with Brown’s overtime goal giving the team a 3-2 win. The following night in Vegas, the Kings potted a 4-1 victory, tying the season series at two wins apiece.

“I think it’ll be a really good matchup,” Alec Martinez said. “They’re a really fast team. Obviously, they’ve had a lot of success this year. You know, it’s a tough building to play in, so especially with playoff atmosphere, that arena’s going to be buzzing. But that said, I think Staples will be too and you know, it’s two good hockey clubs going at it.”

A Pacific Division title is an amazing accomplishment for Vegas, who will look to add to their banner haul in their inaugural season. Despite their lack of postseason experience as a hockey club, there is ample individual playoff experience with players such as goaltender Marc-Andre Fleury, who won three Stanley Cups with Pittsburgh, and forward James Neal, who countered Fleury in last year’s Stanley Cup Final with Nashville. Former St. Louis forwards David Perron and Ryan Reaves have already figured as key actors in postseason rivalries with Los Angeles.

And while the Kings will boast a significant advantage of postseason experience, they were also a club that used 34 different skaters this season and will feature a mix of youth and stalwart veteran play on the back end.

“We’ve got a lot of guys in here that this will be their first taste as well and they’ve got a lot of guys over there that yeah, that’s their first season playing together, but there’s still a lot of playoff experience,” Martinez said. “Just off the top of my head, I mean obviously James Neal has been to the final last year and Fleury has been a couple times the past few years. … So will it be a factor? I guess we’ll find out.”

“[Vegas has] been really good this year and I think the first two games we played them they were the better team both games,” Kempe said. “But I think after that the last two games we played against them back-to-back I think we really showed how good we can play against them and I’m sure … I’m going to be really excited to play in the playoffs for the first time and I think a lot of guys on this team know what it takes to go all the way and that’s a good start.”

John Stevens, on an assertion that the Kings weren’t ready to start the game:

Disagree. I thought we had a really good start to the hockey game. I thought we got pucks in deep. We really were looking to get pucks to the net. I really liked the start of the hockey game. What I didn’t like was we mismanaged the puck severely that gave up easy goals, and you can’t blame our goalie on any of them. I think if you had two goalies in the net, you might not get a save there because we had full possession of the puck on three of those plays, and the other one was a carbon copy of what we were aware of in terms of a back-side play with a guy going to the net in Jamie Benn. It was all things we were aware of. I think the biggest problem in the game tonight was we had self-inflicted wounds that gave an opponent that played last night a lot of opportunity to take advantage, and again, now we have to play from behind. Actually, I had said after the first period I really liked the way we started the game, but when you have those catastrophic turnovers that end up – I mean, one’s a breakaway – they’re just plays that are going to get you in trophy.

Adrian Kempe, on how the team has played leading up to the playoffs so far:

I mean except for the first period tonight, I think we’ve been playing really well the last couple games. And the second period and third period I think it was pretty good from our team as well. But I mean we’ve got to bring it to the playoffs now and we need every single guy in the locker room. We need everybody to be at their best right now. A fun thing starts right now so that’s exciting and I hope everybody’s ready for it.