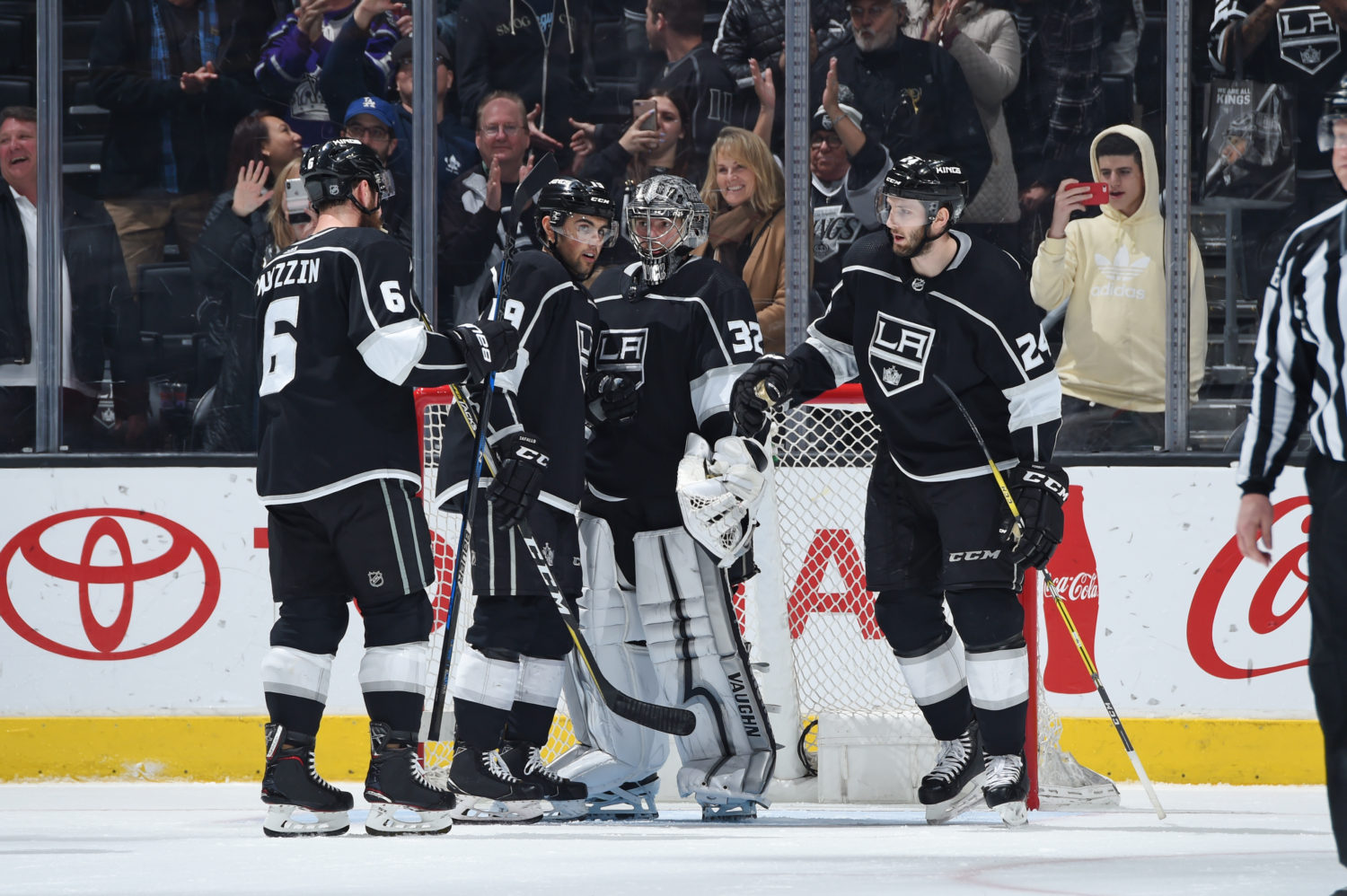 After Tuesday’s optional practice, Head Coach John Stevens met with the media to share information on injuries to Alex Iafallo (upper-body), Derek Forbort (lower-body) and Jake Muzzin (upper-body), and who might get an opportunity to play in the absence of two left-handed defensemen.

-There’s no firm update on Forbort just yet. He didn’t skate in the optional practice.
-Muzzin joined the skate late and participated away from the main group of skaters.
-Both Muzzin and Forbort are out Thursday. Kevin Gravel and Daniel Brickley will “both get consideration” to jump in in their absence.
-Alex Iafallo skated at the outset of the optional; if he can practice Wednesday, he’ll be under consideration for Thursday.
-Kurtis MacDermid and Oscar Fantenberg are both “options” should the team decide to recall a defenseman from Ontario. Alex Lintuniemi, no doubt stinging from this Cristiano Ronaldo strike on his beloved Juve, also drew recognition for his recent play.

On whether there are updates on Derek Forbort or Jake Muzzin:
No update. Muzz is back on the ice just trying to keep his legs underneath him, and Derek, we’ll just see how he respods in the next few days here. But neither one will be available for tomorrow. Or Thursday. What day is it?

On Kevin Gravel and Daniel Brickley, and who would get consideration for playing time:
To be honest with you, the fair thing to do for the hockey team right now is to try and put the player in we think can best help us right now. I think they’ll both get consideration, to be honest with you. I think Daniel’s come in and made a good account of himself. It’s been a little bit difficult for these kids because they come in at a time of the year when there’s not a lot of practice time. They have had a little bit of practice time, game day practices, to get up to speed and get a sense of the tempo. You just don’t have a lot of the resistance drills that you might have at different points during the year. I think it’s been good for them, both he and Sheldon to be with us, and try and get up to speed, but he’s a big guy that moves well that’s got a really good skill set that you can see why our staff liked him, and Kev’s got some experience here. Kev’s been a guy that’s come in and played left or right side. He’s played with Drew a little bit before. He’s played left and right side, so you have options there with him. He’s played power play a little bit, he’s killed penalties. I think obviously with two lefties going out, I think the fact that they’re both left-shot defensemen gives you options there. But they’ll both be considered.

On whether the team would call a defenseman up from Ontario:
Well, we have ‘em. We know we’ve got MacDermid and Fantenberg down there that have played a significant part of the year here. They went down to continue to improve their games, and by everything we’ve been told, they have done that. So, they’re certainly two guys who are options to us that are only a short drive away from joining us, and the other kid down there that’s played pretty well is Lintuniemi. There are guys down there that we think that have depth that can help us if we need it.

On whether he was pleased with the defense last night under challenging personnel circumstances:
I think our defense overall in general has really played well lately. If you go into the Anaheim game, we didn’t think we played great. I thought they really were invested in that game. And, last night, you got five guys with a team that comes at you hard. They’ve got some really high, high-end offensive guys, so I thought the group did a good job. You ask guys to take on more responsibility when a guy like Forby goes down. Muzz isn’t there anymore, so Marty’s got to take more minutes, Dion’s got to take more minutes, Foles has got to take more minutes. Paul LaDue has come in and taken advantage of an opportunity. We need him to come in and be a really good competitor, and I think he’s done that with his opportunity, but the schedule, the way it is now, it helps us because we knew we had a two-day break coming out of that game. We weren’t looking past that game. I think even if it was a back-to-back you do what you can to try and win that game and worry about the next one. I think the defense as a group has been fully invested into what we’re doing.

On the spike of injuries in the Western Conference:
The schedule’s tough. I think the schedule, you’re playing a really physical, fast game. I think for Colorado, that was their 12th game in 21 days. We just went through two stretches of 11 games in 19 days, and the demands on the athletes is enormous, and I think the fact that the teams mean so much this time of year, everybody playing each other seems to have an awful lot at stake, so it adds to the intensity of the game. So, every puck battle, every inch of ice is contested, and with that comes a lot of contact, and those are two what we would call blunt force trauma injuries. We try to do everything we can to prevent soft tissue injuries or injuries that we think are avoidable. Those types of injuries, I’d call them a blunt force injury, maybe a little more awareness of where you are along the wall – those things happen. There are so many contact situations in a game that I think that’s a big reason you see the amount of injuries there are this time of the year, just because the game’s so fast, so hard and so much at stake, and the schedule’s so demanding that there’s an awful lot of contact through a short period of time that injuries happen. [Reporter: We just heard this morning – Cam Fowler is out two-to-six weeks.] … You see defense really involved with the puck now, everyone wants their defense to move pucks and skate pucks out of trouble. It seems like they’re involved in the rush a lot. When you have the puck more, you get hit a little more and maybe that lends itself to those situations. Not surprising this time of year. Again, with all the contact and all the speed of the game. It’s tough. The schedule’s tough this time of the year.