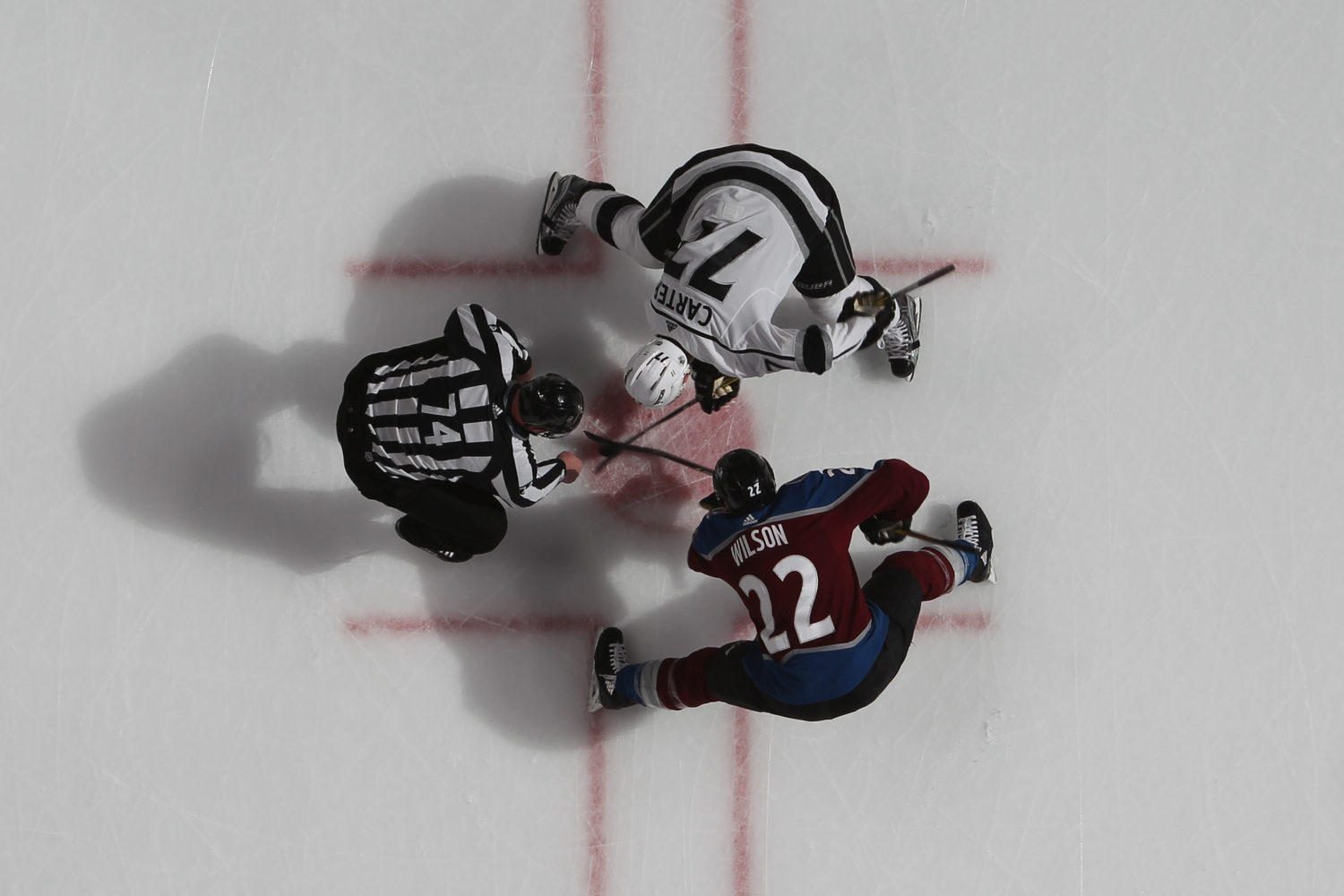 On what Jeff Carter has done well production-wise since coming back from his injury:
In terms of his offense? [Reporter: Yeah.] He’s a guy that’s got a ton of experience, knows how to win, what it takes to win. If you look at the goals he’s scored, it doesn’t come in one area. He doesn’t score goals just by getting easy ice and scoring off the rush. He’s scored goals in the blue paint, he’s scored goals on the rush, he’s scored goals off the forecheck, he’s had to tip deflection goals, so I think a guy that’s a really good offensive player puts himself in areas of the ice where he can have success offensively and he’s willing to go to the tough areas of the rink. You combine that with a really good skill set, he’s had such a good stick, heavy stick, great shot around the net, but it’s just his instincts off the puck to go where the puck’s going to be, and he puts himself in scoring areas. It’s really allowed him to produce and really help us with his offensive production. [Reporter: Has he opened up things a little bit for Rieder, too, since they’ve been together?] I just think sometimes you put guys together and you can see chemistry, and they just seemed to read off each other really well. I think Toby’s got really good speed where he hunts a lot of pucks, and he can get to an open space when he’s even or a little bit behind and I think Jeff understands that. I just think Toby plays a pretty responsible game. He has a really good support game where he can make a give-and-go play, and I think he can read to get to some open ice, and Jeff’s a good enough player to find him. And, you know, Toby’s not a big guy, but he, too, is willing to go to some of the hard areas. Really along the forecheck lines he gets in there and disrupts plays, and then he’s looking to attack the net. For whatever reason, some guys have chemistry, and those two seem to have a little bit of chemistry when we put them together.

On the biggest key to a victory in tonight’s game:
Well, I don’t know if there will be one big key. We’ve just got to be ready to go, and our team game has to be sound. This team is a really dangerous transition rush team. That top line has carried them throughout the year, so I just think we have to continue to play a really strong LA Kings game, and that is check really well, be disciplined. Their power play is one of the tops in the league, but I don’t think you want to play a track meet with them. I think you want to play a really responsible game, and good checking means managing the puck, as well. We’ve got to be able to manage the puck. You’re tough on walls and being able to get the puck in deep in the offensive zone, but I think it’s the rush game that we really have to be sound in not allowing this team a lot of speed on the rush, because they really excel at it.

On Colorado’s top line:
We can talk about the whole line. If you study a good offensive line, you talk about chemistry, you’ve got an explosive guy that can beat you with so many different elements in MacKinnon, but you’ve got Landeskog, who’s your prototypical power forward with good hands and goes hard to the net. And, Rantanen, I don’t know if you understand how big he is for a young guy. He’s got really slick hands, he’s really deceptive and slippery in his one-on-one play, and now you have a guy, a right and a left, off the flanks that can shoot the puck equally well. So, you’ve got both guys that love to shoot the puck off the perimeter that can score from distance. That line, as a group, has been one of the most dangerous lines in the league, certainly in the second half of the year. [Reporter: Last night, that other line was pretty good, too. Jost, Kerfoot, those guys.] Well, they’re good young players. Kerfoot’s a competitive guy. They play him anywhere from first line to fourth line. That’s a credit to his game, right? I know when MacKinnon was out, he was on the first line. Last time in there, we played him on the fourth line, last night he was on the second line. Jost is a young kid that’s got really good competitive skill. He showed a lot of good speed and quickness on the goal he scored last night where he got in through the middle of the ice there and made a good shot. Sometimes you place young players and you don’t give them the respect they deserve because they’re young players, but then you look back down the road and say, ‘Jeez, those guys are really good players we just weren’t aware of,’ so we want to make sure we’re aware of ‘em. I think we have a really good appreciation and respect for what they’re capable of, and certainly we’ve got to be aware of when they’re on the ice.

On Paul LaDue being thrust into important games, and what he’s shown thus far:
Paulie’s ready. Paulie might be young and inexperienced – he’s a ’92-born, so we think that he’s a mature kid. The one thing we’re happiest about with Paul in the Anaheim game was that I he was a really good competitor. Sometimes you’ve just got to have courage to play. Take the puck and skate with it, make plays, you know you can be the player that we think you can be and not go out there afraid to make a mistake, and I thought Paulie did a really good job on it. I thought he was a really good competitor in that game. We think he has a skill set that can help us, but I was really happy with the way he approached that game, and he had a lot of courage just to be the player he should be.