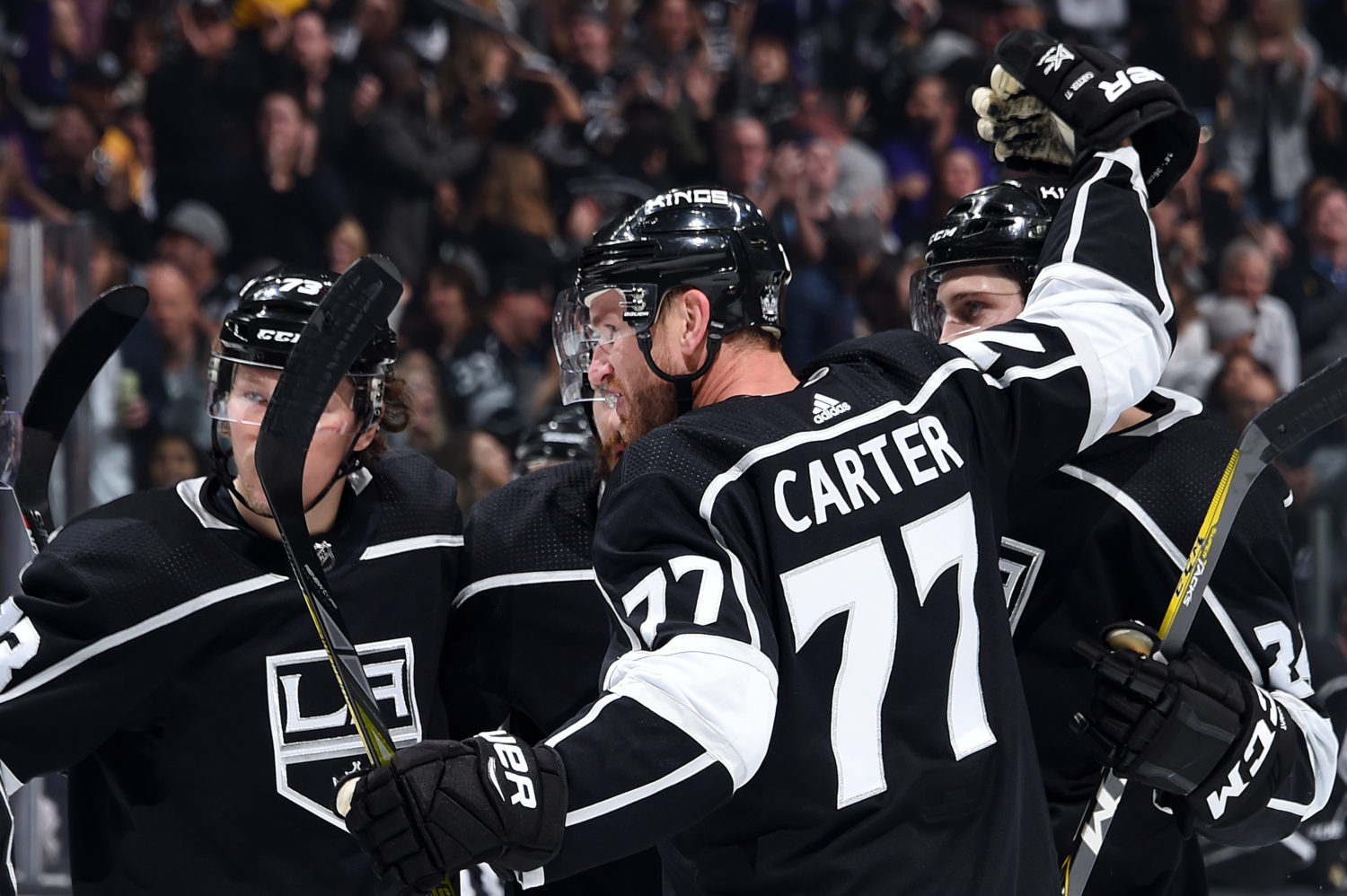 Dustin Brown, on the win:
It was a grind out there. They’re playing really good hockey the last two months, and it’s a challenging game. They’ve been out of the playoffs and they have nothing to play for, so they play with a little bit of lightness. It’s a huge game for us. Kind of just grinded out. Carts getting a hat trick, that’s why he’s in our lineup, that’s why he’s such a big part of our team, because he’s a game-breaker like that. [Reporter: What has he meant to the team since coming back?] I think a lot of it, I mean, a lot of people talk about the goals he scores, I think it’s more than that. He creates match-up problems for other teams. When you have a 2C who could be a 1C on most teams, it makes it a tough match-up on faceoffs, all the little things he does Tonight he did what he was known for, but he’s been a big lift for us since he came back.

Jeff Carter, on scoring three goals in the win:
They’re all playoff games for us now. A big win for us to pop a couple in and help out.

Carter, on whether he expected such a strong performance from Arizona:
I mean, you look back at the last month, they’ve been playing some pretty good hockey their last two games. They beat two division leaders. We knew what we were getting into. They played us hard a few weeks ago when we were in Arizona, and they played us hard again tonight.

Carter, on his contributions since returning from injury:
I think my role on this team is to provide offense, so if I can keep putting it in the net, that’s a good thing.

Carter, on how long it will take to put the win behind him and start looking ahead to Anaheim:
We’ve got to start preparing now. Another level tomorrow.

Carter, on whether his hands never went away, despite his extended absence:
I had enough work by myself on the ice for a couple months. I got a lot of shooting and hand work.

Jack Campbell, on the intensity in the win:
I mean, it was huge. We knew we had to get this one. Obviously, it creates a little bit of pressure, but that’s what we play for. We talk about it all the time you want the pressure because it means you’re in the hunt, and it’s a big two points. The guys played great in front of me.

Campbell, on facing Darcy Kuemper:
He looked good, and I learned a lot from him while I was here, but I wanted to get two points for the team, so it was just really good to go out and get it done.

Campbell, on whether he feels he’s performed well since joining the Kings:
Yeah, I mean, absolutely. I think I’ve done well, but I have a lot more to get better at. It’s pretty obvious when I watch the tape with Billy. It’s exciting because I’m not even close to where I can get to as far as my details of my game. I know whenever I step in the guys play great in front of me, so I just try to get a win any time I’m able to get in here.

Campbell, on what he’d say had he been told on January 1 he’d play pivotal games with the Kings:
I mean, I probably would’ve said ‘that’s pretty far away, I’m just focused on the moment down here.’ That’s the cliché answer, but this is great, it’s exciting, it’s so fun to be up here in the best league in the world with a great team, and we’re hungry to win, so it’s fun to be in the hunt right now playing with the guys, and we’re just trying to focus on the game tomorrow now.