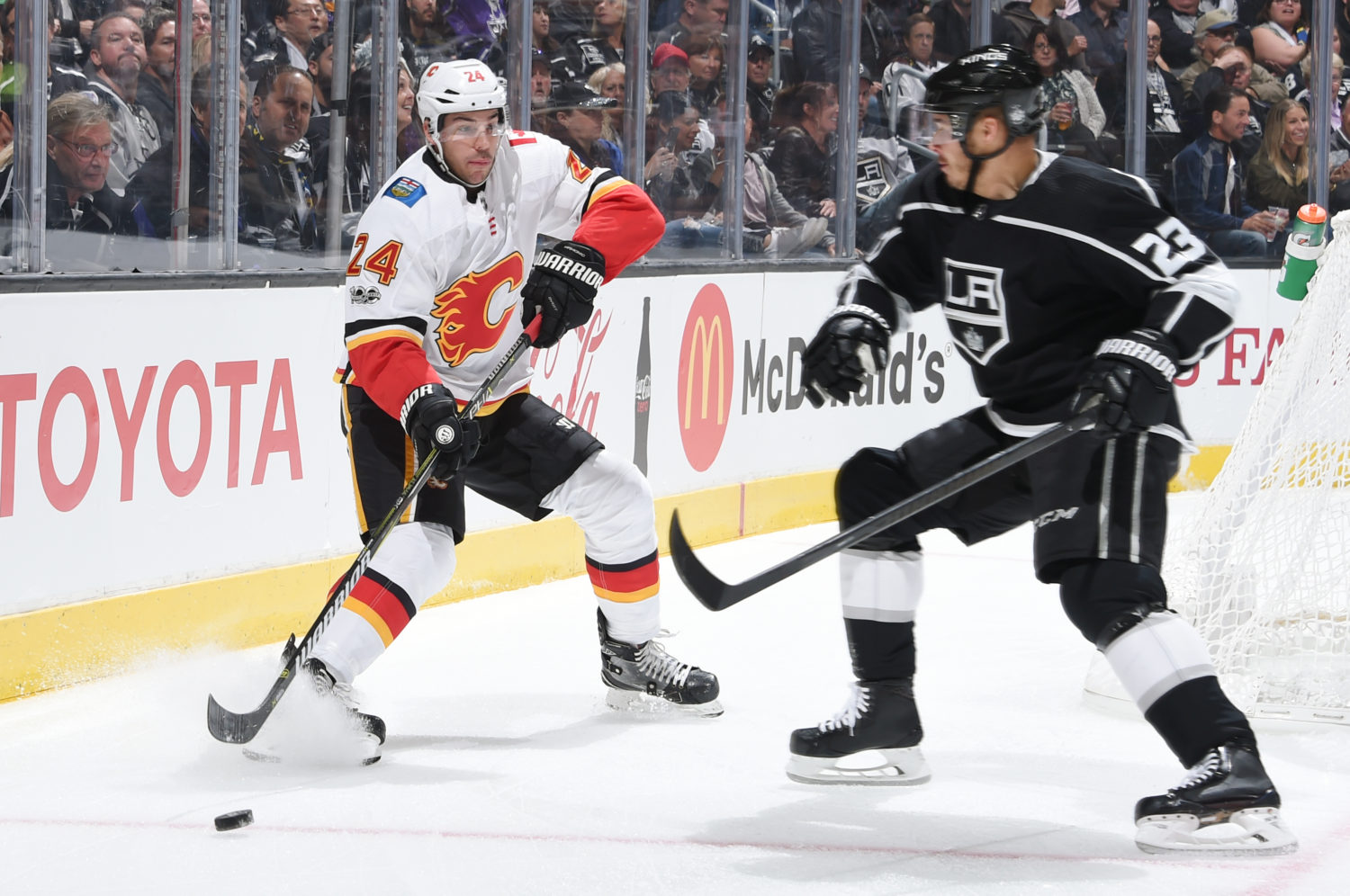 INSIDERS. It’s a game day, one of six that remain on the Kings’ schedule as the Calgary Flames’ second visit completes the teams’ four-game season series (7:30 p.m. / FOX Sports West / FOX Sports GO / FUBO TV / KABC 790 / I Heart Radio). Los Angeles is 1-1-1 thus far and hasn’t faced Calgary at Staples Center since way back on October 11, a game that produced a Drew Doughty-Matthew Tkachuk shouting match (and a solid +14 shot attempt differential) and resulted in one of Sean Monahan’s 10 career overtime game-winners. Monahan, along with several of his compatriots, is out tonight. In advance of the game, the Kings aligned as such:

The vitals: Jonathan Quick was the first goalie off the ice and expected to start in net. He’s 13-8-5 in his career against Calgary with a 1.92 goals-against average, a .922 save percentage and three shutouts. Andy Andreoff, Michael Amadio, Paul LaDue and Kevin Gravel remained on the ice for extra work with Jack Campbell and are not expected to play tonight. The team is aware of the stakes that lay ahead and the importance of each and every shift. “It’s playoff hockey. I think everyone in here knows that,” Trevor Lewis said. “We’re fighting to stay alive here, so these are all must-win games now.” Lewis said that he wasn’t watching last night’s Anaheim comeback over Edmonton, but was still aware of what had happened. “I checked the score a couple times,” he said. “We’re still in a spot that if we win games, we’ll control our own destiny. You don’t want to have to rely on other teams to lose. We’ve just got to focus on ourselves still right now.”

Their vitals: Calgary will be without Johnny Gaudreau (personal), TJ Brodie (upper-body), Matthew Tkachuk (upper-body), Sean Monahan (wrist/hip) and Kris Versteeg (hip). They’re likely to line up with Frolik-Backlund-Brouwer, Ferland-Jankowski-Stewart, Bennett-Shore-Lazar and Glass-Stajan-Hathaway up front with defensive pairings of Giordano-Hamilton, Stone-Hamonic and Kulak-Andersson, via NHL.com’s Dan Greenspan. Mike Smith, who may give you some willie-nillies in such a big game, what with his 17-8-2 record, 2.28 goals-against average and .930 save percentage in his career against Los Angeles, is expected to start in net. Nick Shore, acquired by Calgary from Ottawa at the trade deadline, will play his first career game as a visitor at Staples Center. “It’s good to see him again on the ice. We’ll probably see him a lot more coming up the next couple years if he stays in Calgary,” Jake Muzzin said. “It’s nice to see him – we had dinner last night.”

-By now you’re aware that the Kings have alternated wins and losses for the past three weeks. They last won multiple games in a row when they swept Vegas in back-to-back nights in late February before defeating Columbus at Staples Center. Sportsclubstats.com’s algorithm gives them a 73.0% chance to make the playoffs, which is curiously a touch higher than St. Louis’ 70.6% chance even though the Blues have a game in hand.

After Saturday’s loss at Edmonton, Muzzin shared that he didn’t think the Kings “were as prepared emotionally as we should’ve been in this game” and again called on the team’s intangible push as an aspect of the overall game that must remain constant for the team to qualify for the postseason.

“Our emotion and our competitiveness from the get-go has to be up for all six games that we have left here,” he said. “From the start of the game to the finish, not tiptoeing into games or waiting to see how it’s going to be. That desperate team that we see in the third period, we’ve got to bring that for a full 60 minutes for the rest of the season here.”

John Stevens was also asked about what he’d like to see come together for the team over the final two weeks and responded with aspects such as puck management, remaining on the right side of the puck while stressing facets of overall team detail.

-John Stevens’ younger son, Nolan, is taking several classes – including one that is available online – so he’ll be able to graduate from Northeastern University this spring. He’s also planning on flying to St. Louis tomorrow to begin practicing with the Blues with whom he signed a two-year, entry-level contract on Sunday.

21-year-old Nolan, the captain of the Northeastern University men’s hockey team that was eliminated on Saturday in the first round of the NCAA tournament, recently completed his senior season with the Huskies by potting 24 goals as part of a 42-point campaign. His path towards a contract was more roundabout than most who are inked by NHL teams; after two seasons as a defensive-minded forward with the U.S. National Team Development Program, he passed through the draft in 2014 and 2015 before St. Louis chose him one month in advance of his 20th birthday with a fifth round pick in 2016. As an NCAA player coming off his senior season, he could’ve waited until August to sign with any team as a free agent, but there was a good familiarity with St. Louis, and moving on from the Blues was never really a consideration.

“His mind was made up,” John Stevens said. “He’s an interesting story because he went through two drafts. He was in the national program where there’s tons of exposure and never got drafted. Kind of played a bottom-six role and went to Northeastern, where he really flourished and got drafted in his last year of eligibility. There are people that liked him – Keith Tkachuk really developed a relationship with him, and Tim Taylor, their player development guys, developed a good relationship with him, so as long as they had interest, I don’t think he had any idea of going anywhere else just because of the commitment they made to him as a player. He was excited that they wanted to sign him, and it’s kind of a sad day when your college career comes to an end, but a really exciting opportunity for him to move on and play at the next year.”

Nolan Stevens had a wide grin during his father’s introductory press conference as Kings coach last April. And though the Kings and Blues played each other two weeks ago, it’s probably a good thing John Stevens won’t coach against Nolan at such a critical, late-season juncture.

“No, I’m kind of glad about that,” John Stevens said.

-INSIDERS. Buy tickets to this year’s Insider Group Night, April 2 against Colorado. This will be a massive game. The “prominent organizational figure” who will speak at a pre-game panel will be Jim Fox. We’ll also be joined by a member of the Kings’ digital team that can answer questions you may have about the club’s tech thrust. I’ll moderate any and all discussions WITH A FIRM AND UNFLINCHING IRON FIST.

On this day 20 years ago we broke ground on what was soon to become the new home for the @LAKings, @Lakers, @LAClippers, @LA_Sparks and music loving fans from all over the world! What is your favorite STAPLES Center moment? #STAPLESCenter20 pic.twitter.com/5cd5yS4ln4