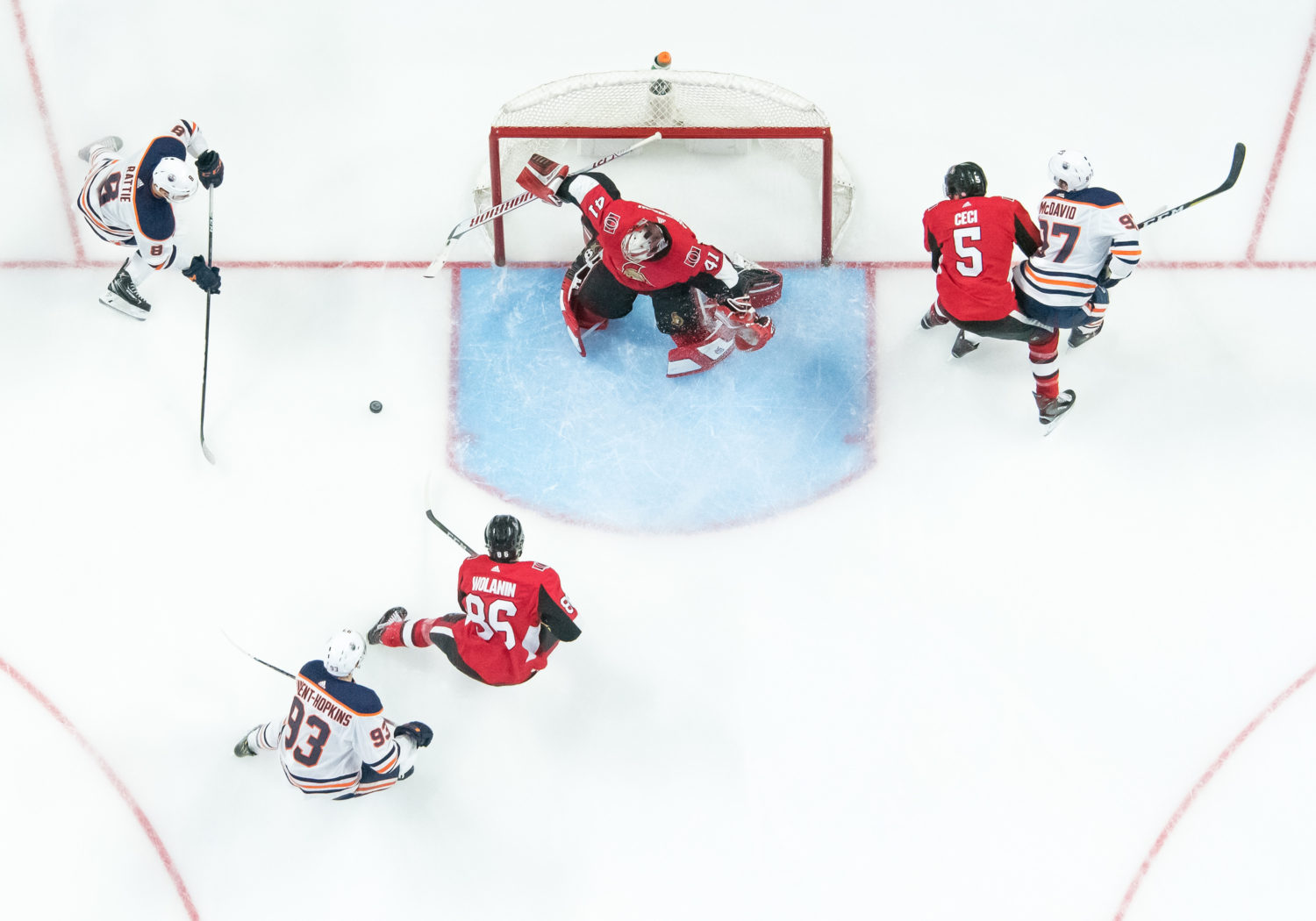 INSIDERS. A wonderful Saturday afternoon to you from sunny and brisk Edmonton. I can confirm that it’s sunny outside because instead of sitting in a dark hotel room, I’m stationed here in the charming, windowed Confederation Lounge at the team hotel, watching the Michigan-Northeastern East Regional NCAA regional.

BTW, you should listen to your pal JR when he says that Air Force is not an automatic out, even in a 1×16 match-up. Regarding St. Cloud, I’m not getting the sense that a Mikey Eyssimont ELC is imminent. Eyssimont, a point-a-game player with 17 goals and 22 assists in 39 games in his junior season, has one year of eligibility remaining with the Huskies.

Also, here’s a nice story by Julie Robenhymer of The Athletic ($), who wrote about John Stevens’ son, Nolan, Northeastern’s captain.

The Kings took the Rogers Place ice at 11:30 a.m. and indicated no changes from the lineup used against Colorado on Thursday:

-The vitals: Trevor Lewis (upper-body / day-to-day), who took the ice late in Thursday’s skate, was on the ice with the rest of the group on Saturday. He was not in any of the first loops during line rushes but came off the ice quickly and didn’t remain on for any extra work or conditioning. Don’t be surprised to see him out there for warm-ups; it’s also possible, though not any sort of sure bet, that he could potentially go tonight. Paul LaDue, Kevin Gravel and Andy Andreoff remained on the ice to work with Jack Campbell. Jonathan Quick was the first goalie off the ice and is expected to start in net against Edmonton (7:00 p.m. PT / FOX Sports West / FOX Sports GO / FUBO TV / KABC 790 / I Heart Radio). He’s 21-4-5 in his career against Edmonton with a 1.81 goals-against average, a .933 save percentage and two shutouts.

-Their vitals: Via Derek Van Diest, Edmonton is expected to line up with forward groups of Nugent-Hopkings-McDavid-Rattie, Caggiula-Draisaitl-Aberg, Lucic-Strome-Puljujarvi and Slepyshev-Khaira-Pakarinen up front, and defensive pairings of Nurse-Larsson, Russell-Bear and Sekera-Benning. Cam Talbot is expected to start in goal on the first night of an Oilers back-to-back that concludes at home tomorrow night against Anaheim. Talbot is 5-8-0 in 13 career games against the Kings with a 3.01 goals-against average, a .906 save percentage and one shutout. Projected scratches are Brad Malone and Yohann Auvitu, with Oscar Klefbom (shoulder), Michael Cammalleri (undisclosed) and Zack Kassian (undisclosed) remaining out.

-You may have noticed several adjustments in the Edmonton forward group, namely, Ryan Nugent-Hopkins skating as a left wing and not a center, and one Ty Rattie skating opposite him on Connor McDavid’s line. Rattie, selected 32nd overall by St. Louis in 2011, has always possessed interesting offensive instincts and a lethal shot but hasn’t stuck around permanently in the NHL since debuting as a 20-year-old with the Blues in 2013-14. He’s posted three goals and five points in six games since his recall, so I chatted with Don Nachbaur, who coached him at the 2013 World Junior Championship and against him over the four-plus seasons Rattie spent in the WHL’s U.S. Division as a member of the Portland Winterhawks.

“You know what? I’m surprised it’s taken him as long,” Nachbaur said. “He was a prolific scorer in junior, he’s a very shifty player, tremendous release and he’s a natural goal-scorer. He gets to the areas of the ice to score. When it’s hits his tape, it’s off his tape quick. So, he’s got some intangibles that you don’t teach, but taking the next step for these young guys, some guys take a little bit longer. I had him on the World Junior team and he was one of the top right wingers on our team, so I know him really well … he’s a good player.”

-Nate Thompson notched two assists in Thursday’s romp, one of which was a first period faceoff win directly to Jake Muzzin on what stood as Los Angeles’ game-winner. It was but one detail of a multi-faceted performance that called on all players in the lineup.

“I think all ends of the ice, I thought we were really good on the forecheck, I think our tracking and our defensive play has been really strong and I think when you’re playing like that, when you’re playing tight checking, it’s usually going to translate to good offense and it did,” he said.

Saturday presents a new set of circumstances. The Kings aren’t in direct competition against a team they’re battling with for a playoff berth, and though the Oilers have been playing strong hockey at the end of a lost season, tonight’s game will still require the same resolve and focus as what was brought with Thursday’s emphatic statement.

“I think at this time of the year, they’re hard games not to get up for,” Thompson said. “We’re still battling for a playoff spot. Every day is a playoff game for us, so we have to continue to play with that desperation.”

It’s a game that’s dually “really important” to the Oilers, according to Leon Draisaitl.

“I think we all have pride and want to take a little bit of that spoiler role,” he said. “I know all these games are still important and they mean a lot to us as a team, and we’ve been playing some decent hockey lately and hopefully we can keep it going.”

-Anze Kopitar has been a popular discussion topic recently, and when asked about him earlier today, Oilers Coach Todd McLellan said players of Kopitar’s caliber “are going to eventually get their opportunities, there’s no such thing as shutting them down.”

He continued: “And while we’re trying to shut him down, he’s doing the same thing to us. I would say a counterbalancing. It my opinion, this is as good of a year as he’s had and he’s obviously driving his team to the playoffs and he’s hungry right now to follow his team base checking when he’s on the ice, but we’ve got to do that against Carter, we’ve got to do that when Doughty’s on the ice. They’ve got a lot of weapons that are playing at a high level and are very capable of hurting you.”

-One question posited to John Stevens carried some acknowledgement of the previous game between the teams, when Los Angeles controversially lost a game in regulation after a pair of official reviews. The first indicated that the puck had crossed the goal line, but the second, which ended the brief euphoria at Staples Center, determined that Dustin Brown “pushed [Cam] Talbot’s pad and the puck across the goal line,” thereby disallowing the goal. Though the Kings didn’t claim the two points, they shook off the difficult loss well, according to their coach.

Stevens then revisited the details of the most difficult review to accept of Los Angeles’ season and how the team moved forward afterwards.

“After they said it was no goal, I wanted to challenge, but you can’t. It’s unfortunate,” he continued. “This is a conversation for another day, but at the end of the day, you know what the worst part of it is? You have a building full of fans that were popping the roof off, and they went home deflated, right? … It really is about the fans and having a great experience, and jeez, we’ve robbed them of a great experience.”

“But, it’s water under the bridge. We’ve moved on, and it’s a point we didn’t get, or two points we didn’t get. Just like we talk about in-game, things happen, and we tried to focus on the next two points that were available.”

-Tonight’s officials are referees Kelly Sutherland and Francois St. Laurent. Linesmen are Ryan Gibbons and Kory Nagy. I’ll chat with Pierre Turgeon and share a Rosen Report recap of the GM Meetings that will lean on what we learned from Rob Blake on Thursday in Colorado. There’s another big game ahead, Insiders. Let’s talk soon.