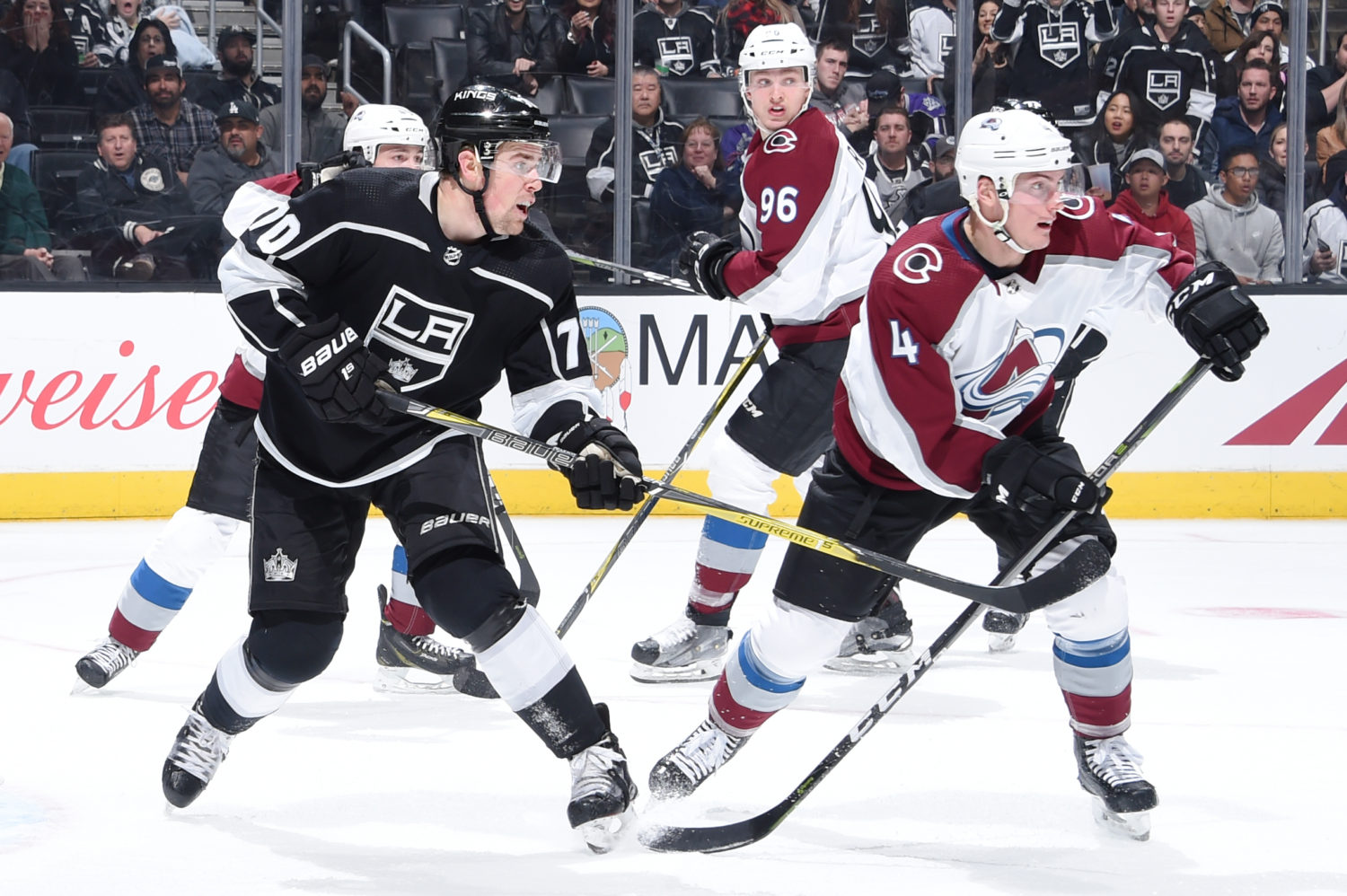 Good afternoon to you from Denver, Insiders. In advance of tonight’s 7:00 p.m. MT game against the Avalanche (FOX Sports West / FOX Sports GO / FUBO TV / KABC 790 / I Heart Radio), the Kings took the Pepsi Center ice at 11:30 a.m. and aligned as such:

-The vitals: Jonathan Quick left the ice first at the morning skate and will be expected to draw the start versus Colorado, against whom he is 14-5-1 with a 2.27 goals-against average, a .911 save percentage and two shutouts in his career. Andy Andreoff, Kevin Gravel and Paul LaDue remained on the ice for extra work, so they’re likely out of the lineup. Trevor Lewis, deemed to be “day-to-day” by Rob Blake with an upper-body injury, skated at the opposite end of the rink from Andreoff, Gravel, LaDue and Jack Campbell and was focused more on skating and conditioning and less on forcefully handling pucks or shooting. Anze Kopitar, the fourth King to have recorded at least seven seasons with a minimum 70 points – joining Marcel Dionne (12 seasons), Luc Robitaille (11 seasons) and Bernie Nicholls (seven seasons) – has 13 goals and 38 points in 39 career games against the Avs.

-Their vitals: Colorado is expected to line up with forward groups of Landeskog-MacKinnon-Rantanen, Jost-Compher-Andrighetto, Nieto-Kamenev-Comeau and Wilson-Kerfoot-Bourque alongside defensive pairings of Zadorov-Barrie, Nemeth-Johnson and Siemens-Girard. Semyon Varlamov, who is 7-4-2 with a 1.90 goals-against average, a .934 save percentage and one shutout in his career against Los Angeles, is expected to draw his 19th straight start. He’ll be backed up by Jonathan Bernier, who missed the last five games with a concussion and acknowledged blurriness in his vision as he battled the symptoms. The Avalanche are 8-1-3 in their last 12 games and 15-2-1 in their last 18 at Pepsi Center. Nathan MacKinnon (38-53=91) has points in 13 straight games and leads the NHL with an average of 1.40 points per game, while Tyson Barrie (12-40=52) has points in 11 straight. He joins Kings (and Nordiques) alum Steve Duchesne (15 games, 1992-93) as the only defensemen in franchise history to post double-digit consecutive point streaks. 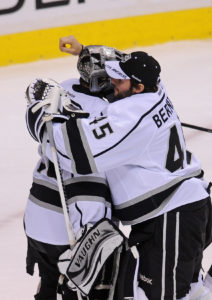 -I asked Jonathan Bernier if there was a singular memory from the 2012 run that still resonates as a pivotal moment for a team that went 16-4 and steamrolled through the Stanley Cup Playoffs.

“To win a Cup, there’s a lot of things that have to happen, but I thought when Brownie hit Sedin in the middle of the ice in the first round, I think that was our turning point as a team, and I just felt like we gained all the momentum from that hit. And, obviously Quickie was unbelievable,” he said.

Bernier, on whether his bond with the 2012 Cup-winning team remains strong after six years:

-Without going by the names, and only using numbers, Colorado’s top line is 56-91-79. They’ve been intact for much of the season. “It’s probably almost our 60th game together this year, so that builds the chemistry,” Mikko Rantanen said. “Everybody can skate, everybody can hold onto the puck. That’s what we need if we want to succeed.”

It’s never one player or one position that will be tasked with slowing down what has developed into one of the league’s most explosive lines, but rather a team-wide commitment to checking as executed by the five players who’ll oppose them on the ice on any given shift.

“They’re a team especially that one line, that looks to spread you out and also gets in on the inside,” Tanner Pearson said. “They kick pucks out, they kind of look back, so you’ve just got to be aware all the time of what’s going on behind you, and in front of you, they make quick strikes and they capitalize on them, so we’ve got to shut ‘em down.”

It’s one of the best rush lines in the league, and the catalyst is the Hart Trophy candidate (favorite?) MacKinnon, who possesses a dynamic combination of skating, playmaking and finishing, though his skill set isn’t one simply defined by skill and finesse.

“He’s fast, got good hands, got a good shot. … He’s got all those skills, you’ve just got to play him hard,” Drew Doughty said. “He’s pretty strong, too. That’s the other thing – he actually is pretty strong. Yeah, I don’t know what his weakness really is, so it’s going to be tough to play against him.”

Neutralizing the attack of a team that has scored at least four goals in six-of-seven will be the focus of a defensively stout L.A. group that ranks second in the league with an average of 2.50 goals-against per game and leads the league with a 84.4% penalty killing rate.

“We just can’t get in a track meet with them,” Pearson said. “We can’t play their game. We’ve just got to play ours.”

-More to come from Rob Blake, who spoke with the assembled Kings media about the efforts to assess and implement new standards of goaltender interference review, which was the biggest point of discussion at the GM Meetings. It’s a nebulous topic, but there was the recommendation to shift goaltender interference verdicts from the on-ice officials to a committee that will feature a retired referee and work alongside the league’s situation room, based in Toronto.

“If you’re looking for more consistency, probably follow the same path as supplemental discipline,” Blake said. “If you leave it to a committee, you might not always agree with the call, because it is a judgement call at the end of the day. But at least if you know there’s a group doing it, you’ll get a sense on how they’re doing it, so you’ll start seeing goals repeatedly and you’ll get a sense of how they call it, so I think that’s why the decision was made to move that to Toronto for the final say.”

Great run in Denver taking in the sights before tonites big game against the Avalanche. Go Kings pic.twitter.com/GZirM9cR0p