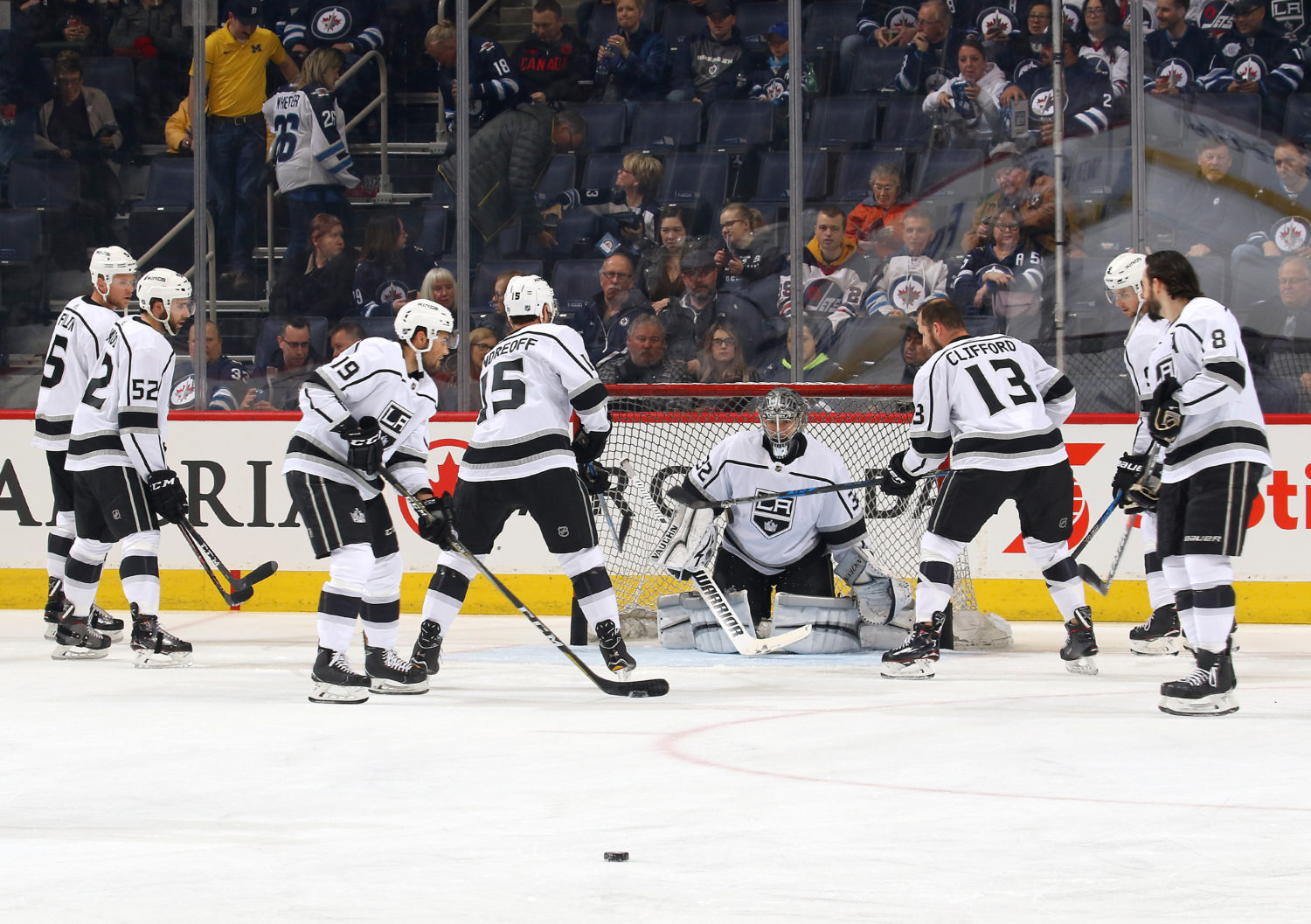 Anze Kopitar, on getting a point:
You know, I thought it was a hard-fought, obviously very hard-fought, game. They’re a very good home team so we knew coming in that it was going to be tough and it was. But I thought we played pretty well. There’s obviously still room in a bunch of areas we can improve on and play better, but I think at the end of the day we’ll take the point. You know, it’s a tough back-to-back and you know, three out of the four points in two nights is not bad. I mean, we’ll take it.

Kopitar, on what it means to get his 82nd point and to be the first centerman to get that many points since Gretzky in ’93:
Nothing. We’re trying to make the playoffs right now so I honestly don’t care about my own stats.

Kopitar, on the possession game:
Yeah, I mean yeah we were moving pretty well. You know, Drew had that shot, he just missed it a little bit. We got the puck back and then I believe it was Tyler that hit the post. But you know that’s what makes a difference. We hit the post, they come down and score. That’s how it goes usually.

Kopitar, on Jack Campbell’s performance:
Jack played fantastic. I mean, gave us a chance to win, obviously more than just a chance to win. I mean he stood on his head that second period. I’m sure it wasn’t easy on him with all the penalty kills that we had and they had us in our zone quite a bit. So he played outstanding.

Kopitar, on the importance of getting an extra point:
Yeah, for sure. Listen we’ll take one point right now. We’ll take as many as we can. We’re obviously going for two, we’re not satisfied by any means, but we’ll take ‘em. I think coming in at one-thirty, two o’clock in the morning and then getting up against a very good home team, it’s not the easiest thing to do. So I think we can be—we can’t be satisfied, but we can still be pretty proud of what we’ve done.

Kopitar, on whether the team was fatigued towards the end of the game:
No, I mean we were playing good. They poured it on the last few minutes so we were battling in our zone, but sometimes that happens.

Jack Campbell, on facing a significant number of shots in the final two periods:
I mean it was pretty fun. It just like, it’s fun to come into this building in a huge game this season and have the trust of the coaches and teammates to play me. And we had a pretty big win last night against a really good Minnesota team and Winnipeg’s a heck of a team and you know, we’ll never say we’re satisfied with one point, but the guys battled super hard. I think you saw how many blocks we had in the game, so I mean to get a point is pretty huge, but obviously our goal is to get two.

Campbell, on what he thought of the overtime:
I mean I’m fortunate we have a great team three-on-three. I mean you see the roster with the guys we put on the ice. We could put anybody out there and they always perform really well in overtime, so I think Toff hit the bar there and he’s got such a great shot, that could’ve gone in. And it’s unfortunate, you know, because I thought we controlled overtime. Just got to come up with a save.

Campbell, on what it’s like to come in at this stage of the season and get the chance to play some tough opponents:
It’s a great question, I mean it’s fun. It’s what we all play for, you know? I mean if you ever want to prove to yourself that you can do it, it’s this time of the year. So you know, it’s great. It’s such an honor to play on this team and they’re such winners in here. And you know, our goal is to make the playoffs and win the cup so it’s really to fun to be a part of it down the stretch and just trying to do whatever I can to help the team.

Campbell, on whether as a young player he could identify with Eric Comrie in the opposite net:
Yeah, I mean he played really solid. I thought we threw some good chances at him and he just looked like he was really comfortable in there. So you know, hats off to him for bringing it and hopefully next time we can beat him. So, be ready to go.