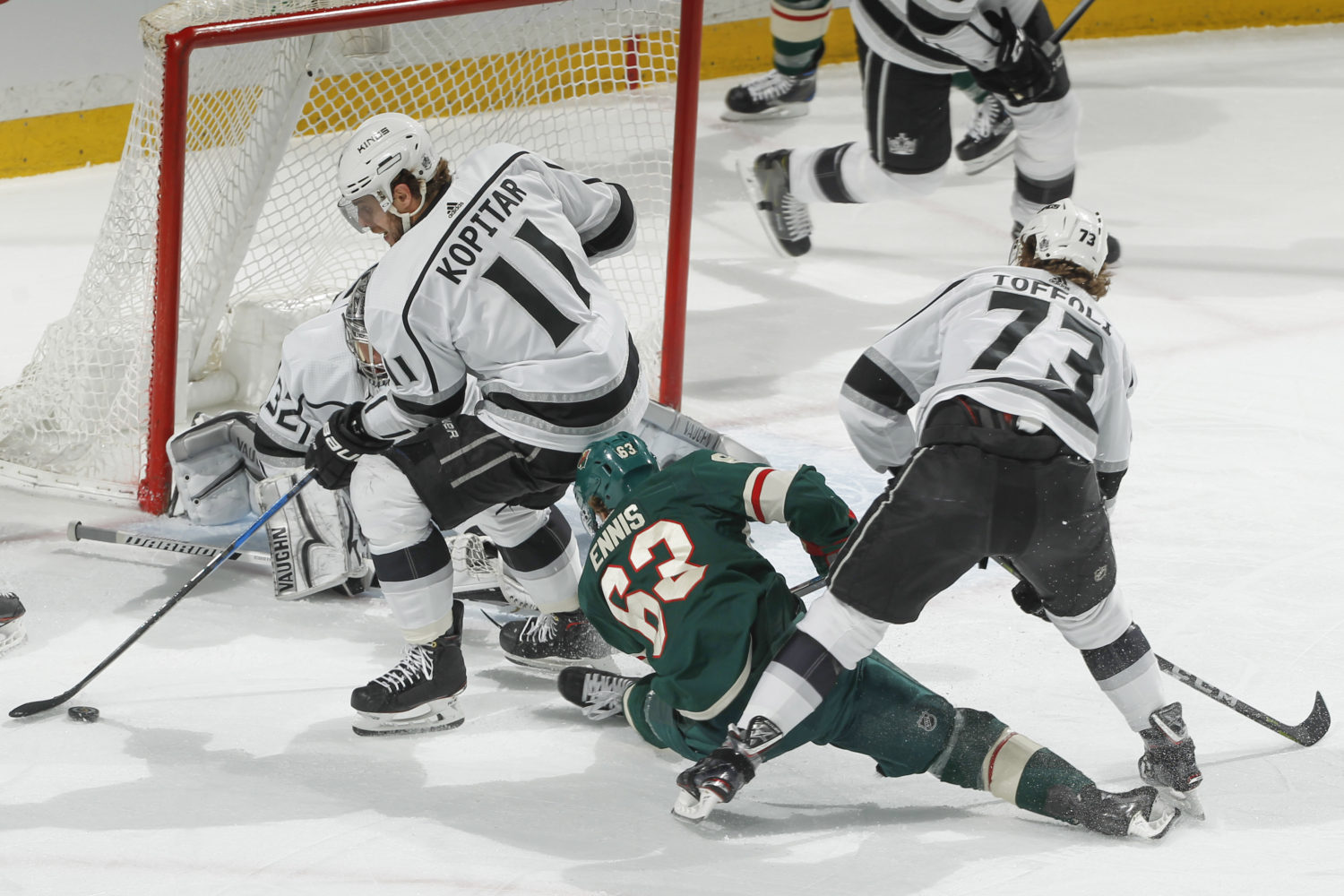 On an important overtime win:
We had to come back. I mean, that’s a huge two points for us against a team, quite honestly, we’re fighting with for position in the conference. It ebbs and flows, for sure, but I thought the guys showed a lot of professionalism in terms of staying with it. We knew there was still time on the clock. We wanted to play the full 60 minutes and make sure that they took advantage of the time left on the clock. Full credit to the leaders on the hockey team for not hanging their heads in that situation.

On the chemistry between Jeff Carter and Adrian Kempe:
They get the match-ups on the road. Staal’s been a good player and has really been a force, and when Lewie went out, we thought we’d put those guys together and we could swap people around and try and spread the minutes out a little bit. Adrian’s come a long way this year. He can play against top guys in the league and be really responsible defensively. We thought he used his speed terrific tonight to skate pucks out of trouble, just like he did when he created the winning goal. We need some of these young kids to take a big step. He took a big step tonight.

On whether his late time out was to rest players or to “draw something up”:
We drew it up exactly how they pulled it off. Coaches always do, right? We have a set-up there that we like to get into place. Sometimes, in my opinion, anyway, if there’s a lot of time left on the clock, you want to save a time out so maybe you get a minute in the zone. You can call a timeout and then regroup. But with that time left, and it was kind of broken lines out there, we thought we’d call a timeout, get everybody reset. At the end of the day, you’ve got to get the puck to the net with traffic and come up with loose pucks. Those guys have really done a good job in that situation all year, so it was just a matter of getting everybody reset. There were guys that were just coming off the ice to get a breather, so we had full gas tanks going into that situation.

On how losing a player early in a game affects setting up the team’s lines and groups:
Well, you’ve got to trust everybody, I think. They play Koivu straight up with Kopi pretty much all night. We have lots of guys who can play center and wing, so I think we have the ability to move people around. But at the end of the day, it ends up taxing guys. I think Lewie’s a pretty important player in lots of key situations. The good thing was we didn’t take a lot of penalties, so there weren’t lots of penalty killing situations, but we had the ability – Carts and Juice play center and wing. Mitchie plays center and wing, Thommer plays center and wing, so we had the ability move people around. But guys have got to stay on their toes because guys are playing different positions coming on and off the ice. At the end of the day, as long as guys are emotionally invested, they can pay attention to what’s going on.

On whether he has an update on Trevor Lewis:
I don’t, I don’t. [Reporter: Upper body, though?] Yes, yeah.

On Derek Forbort’s frightening skate cut:
First period, yeah, he got a skate to the side of the head there, it looked like. Any time you see a guy coming out bleeding like that – I thought it was the puck at first, I’m still not sure. The trainers did a good job getting him patched up, and he came back and played an important role for us. [Reporter: Did he need stitches on that ear?] You know, I don’t know. I’m not sure.

On Jonathan Quick:
Jonny, he’s been a backbone here for a long time. He’s a guy we count on to make key saves at key times and just settle things down back there. I thought his puckhandling was really helpful tonight. He just has a calm in the net that I think resonates with our team, but he’s made a career out of making key saves at key times in critical moments. We need him to.