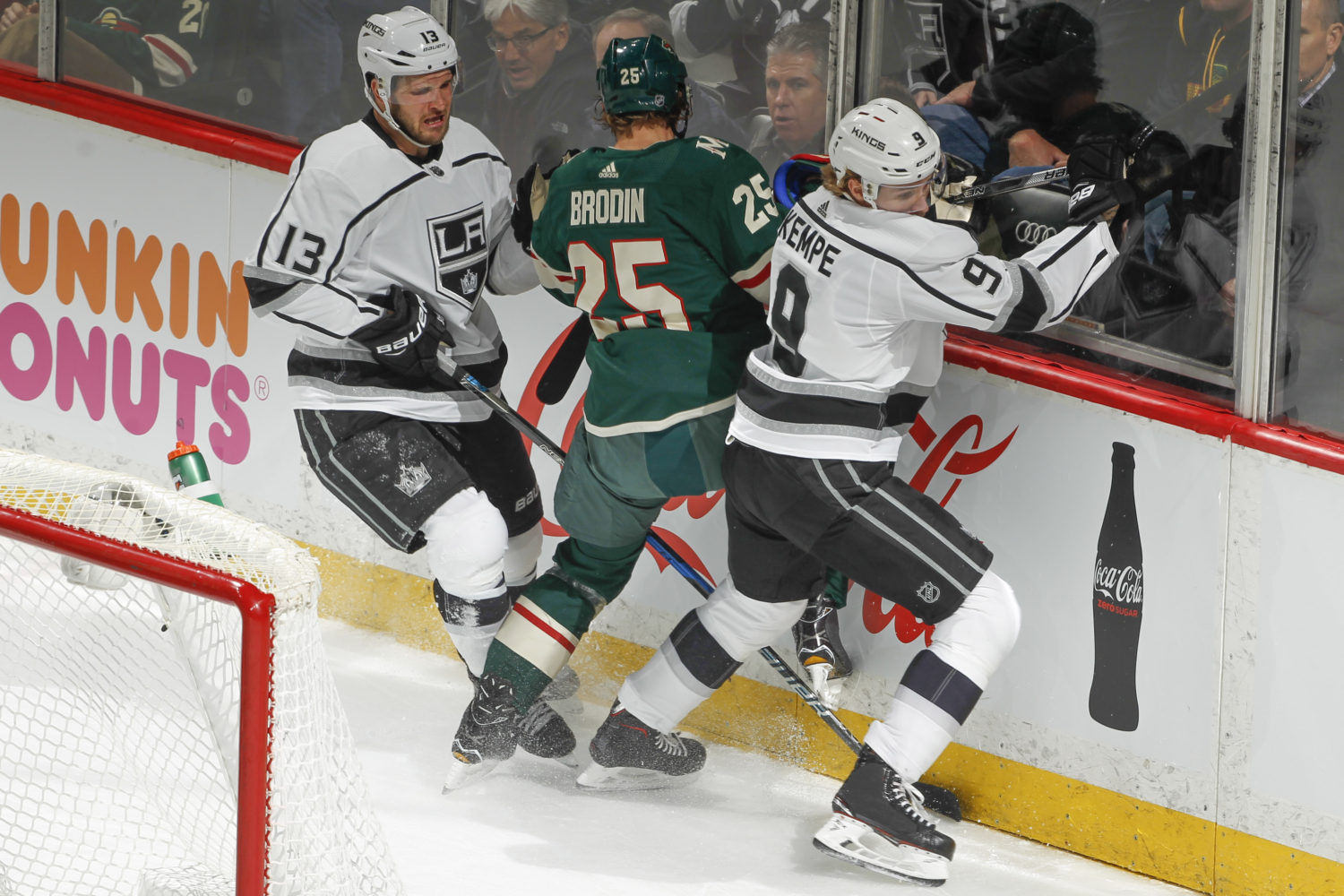 Drew Doughty, on grinding out a win:
Yeah, it was a big win. You know we probably didn’t have our best effort. We played good at times, played pretty bad at times too, but we came out with the win. At this time of year it doesn’t really matter how you do it, you’ve just got to win.

Doughty, on his assist on Brown’s goal:
Yeah, you know we were kind of—that look we had on the six-on-five was kind of the same look we were doing on the power play– that spread look– and you know, I found I wasn’t really able to find a lane unless I kind of tried to fake someone out. So on that one I tried to really just fake like I was passing the puck and that opened up the lane for a couple of seconds and that’s how I found the lane and Brownie just made a great play up in front and Brownie’s been great in front all year.

Doughty, on what he liked when the team was “clicking” tonight:
You know, when we were playing LA Kings’ hockey I think that was when we’re at our best. You know, you can see it– shift in, shift out. When we’re getting pucks in deep, when we’re trying to use our speed on the rush we’re moving pucks up to our forwards quick and we’re using that speed and making little plays and making simple plays at the same time. That’s when we play our best hockey. When you see us try and get stretched out, not making those plays to each other, that’s when they dominated and that’s how they got back in the game and eventually got the lead in the game was because we were just not making those little plays out of our own end.

Doughty, on Kopitar breaking his stick on the game-tying goal:
Oh yeah, I forgot about that. Well that had nothing to do with me and Muzz up top. That was the three guys battling down low. I think it was Carts, Ty, and Brownie. Yeah, I forgot about that. So without them doing that the goal would obviously never happened. So they deserve just as much credit as the guys who put the puck in the net.

Doughty, on what Carter has brought to the team since returning to the lineup:
The puck just finds that guy. It’s unbelievable. It really is unbelievable. You know, he’s had two big goals again for us tonight and he’s scored almost every game he’s been in, I feel like, since he got back. He’s a goal scorer and he does it every single night. So he did a great job for us there once again.

Jeff Carter, on how much of a gritty win this was:
It was big. Up two, tied, late goal in the second. I thought we had a really good third period. You know, we showed a lot giving up that late goal and then coming out with a big period, late goal, tie it. Don’t give up and grind one out in overtime. It’s a big win for us.

Carter, on Kopitar breaking his stick on the last goal in regulation:
It was, I don’t know five, six people down in the corner there just kind of picking it out. You know, I think our thinking is obviously we want to get the puck back, but if we can try and kill a few seconds to get Kopi back and get him back in the mix– you know, Ty and then Brownie did a great job of digging there and I was kind of reading off the pile a little bit and was able to get the puck up top. And you put the puck in the net, good things happen.

Carter, on whether he liked the chemistry between him and Kempe tonight:
Yeah. Yeah, unfortunate circumstances. Yeah, I mean I think he plays a game similar to me where it’s get the puck and go. You know, you saw in overtime there, you get the puck he’s going to the net and that’s a big-time power move that he made there and, you know, a big win for us.