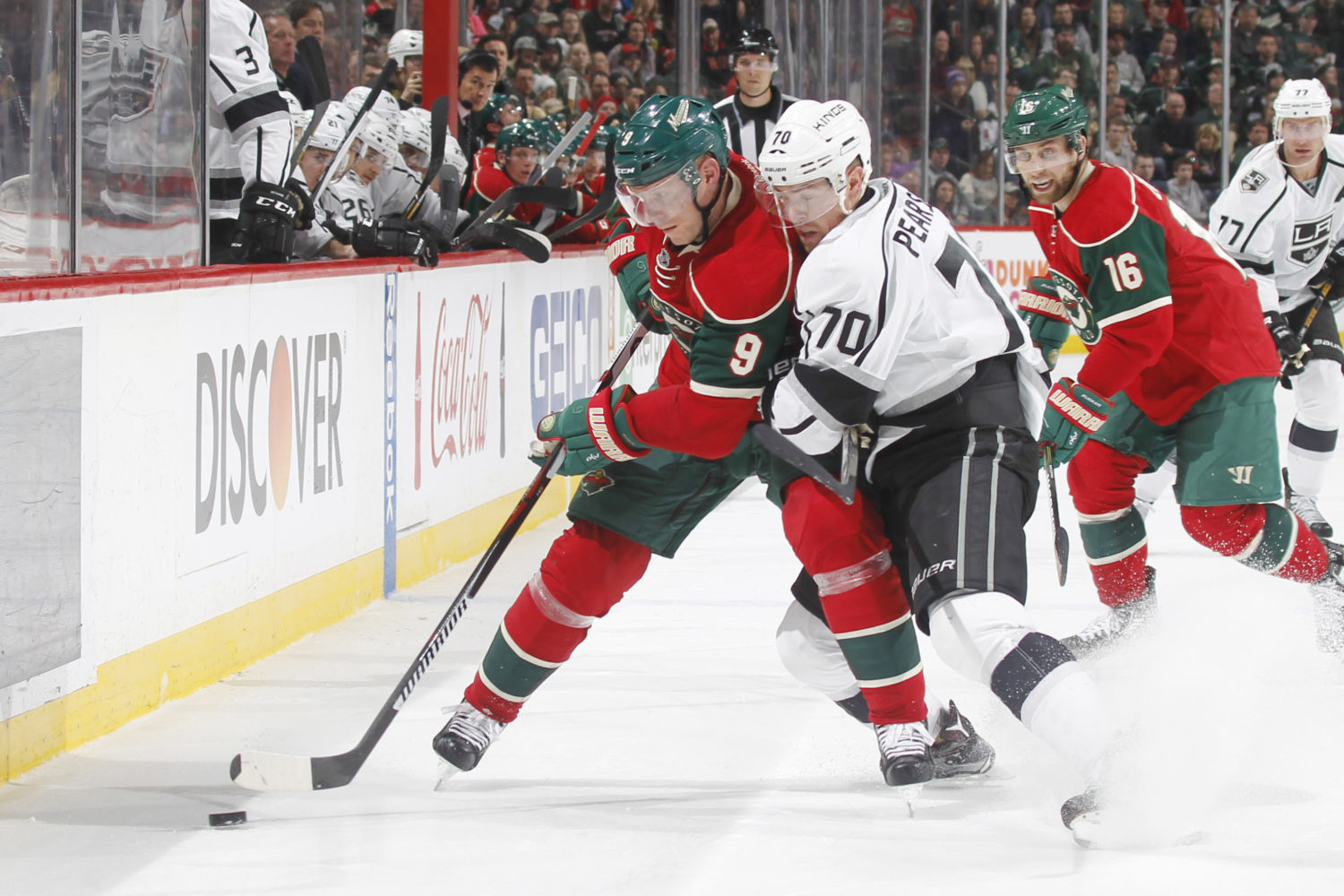 On what he’s looking to see tonight, with the New Jersey game in the rearview mirror:
Well, we just want to continue to build our team game here. I think if you look at Minnesota, they’ve been an extremely good home team. They’ve been probably a .500 team on the road, but at home they’ve been extremely effective, and we’ve seen that with a few teams in the league. I think part of it is they’re a fast team, they forecheck really well. The boards in this rink are really fast, and I think they use that to their advantage, so we’ve just got to make sure we’re ready to go. I think the whole focus for us right now is just getting our team game in order, making sure that we’re continuing to check better and making sure we spend more time with the puck. We thought we did a lot of good things in the Jersey game. We had the puck a lot, we just need to create more from it, so if anything changes from the last game, we’d just like to create a little more offense by getting into the tough areas a little more, getting a little more movement through the middle of the ice offensively and spend a little more time at the net.

On whether he plans to rotate in lots of players on the back-to-back:
Well, you’ve got to lose your lineup, but if we had a team that played really well tonight, we’d have no problem playing that team tomorrow. Depending on the match-ups, depending on who’s playing well, there’s a lot of things that go into the evaluation, but we’re looking at today. Obviously, the schedule, we know what it is, but we’re really focused on today. We’re coming off a day of travel. So, we had a day to regroup, an afternoon game prior to that, so we need to be ready to go tonight. The big thing is the start. This team is a really good team at home, and we need to make sure we’re ready to go.

On recent five-on-three and four-on-three power plays, and whether he wants better execution:
Well, if you look at the four-on-three, we created some really good looks at the net. That shot that Drew took off the tip there, I’m not so sure if he shoots that puck 10 times he doesn’t score on five of ‘em. It was just a terrific shot and good movement off that sequence. The same thing when we got underneath on a play where we found Brownie at net-front. The thing we didn’t like about the four-on-three, we had to go back for the puck three times, so really you want to bear down on faceoffs and start with the puck We did go back and look at it with the group. Just better recognition of what your options are. I mean, teams … have certain schemes they want to kill with, and I think just recognition of where their players are killing and where the ice is to take advantage and making sure we have a plan. The five-in-three the other night, it’s clear that’s a situation you want to take advantage of. Those are huge momentum shifts in a game. We talked a couple weeks ago of how we hadn’t seen a five-on-three all year, and now it’s in your lap. We’ve talked about it, the guys are aware it. The one change we did make last game was with Tyler on the back end so we had two righties up top. I thought that might create a good look for us, but at the end of the day, we have a plan that we want to work from, but we want the players to use their individual skill to create the opportunities that they see when they’re on the ice. Probably not a whole lot we would change on the four-on-three because we got the looks other than the faceoff that killed us going back for the puck three times. We’ll continue to try different things at five-on-three if those situations occur, but those guys have performed in that situation before. I know we’ve got a couple four-on-three goals this year, but at the end of the day, you really want to capitalize on those opportunities when they’re there.

On whether he’s looking for “chemistry” or “systematic” changes, given today’s adjusted line rushes:
Just getting reps coming off – we had several guys that didn’t skate yesterday, and again, you’re just trying to look at your lineup. You do look at your team you’re playing against. We do have a pretty strong suspicion on what their match-ups are going to be. Sometimes it’s based on that, but ultimately we want to get reps with everybody to keep them sharp. What we do in the mornings is not always what we do at night, but certainly wanted to get their reps in more than anything else.

On Tobias Rieder potentially skating alongside Anze Kopitar:
Kopi’s like Drew. It doesn’t matter who you put with him. He gets ‘em going. Kopi makes people with him better, so I think Alex has done a really good job with Kopi this year because he’s a real worker, gets on top of pucks really well on the forecheck. I think Toby does that. Tanner’s done that at times this year where you move Brownie on the left. But Kopi’s a lot like Drew Doughty for me. It doesn’t matter who you put there, if they have a skill set. Just complement what he is. He’s going to have the puck a lot, he’s going to play against top players, so you’ve got to be responsible, but he has a tendency to make people he plays with better.