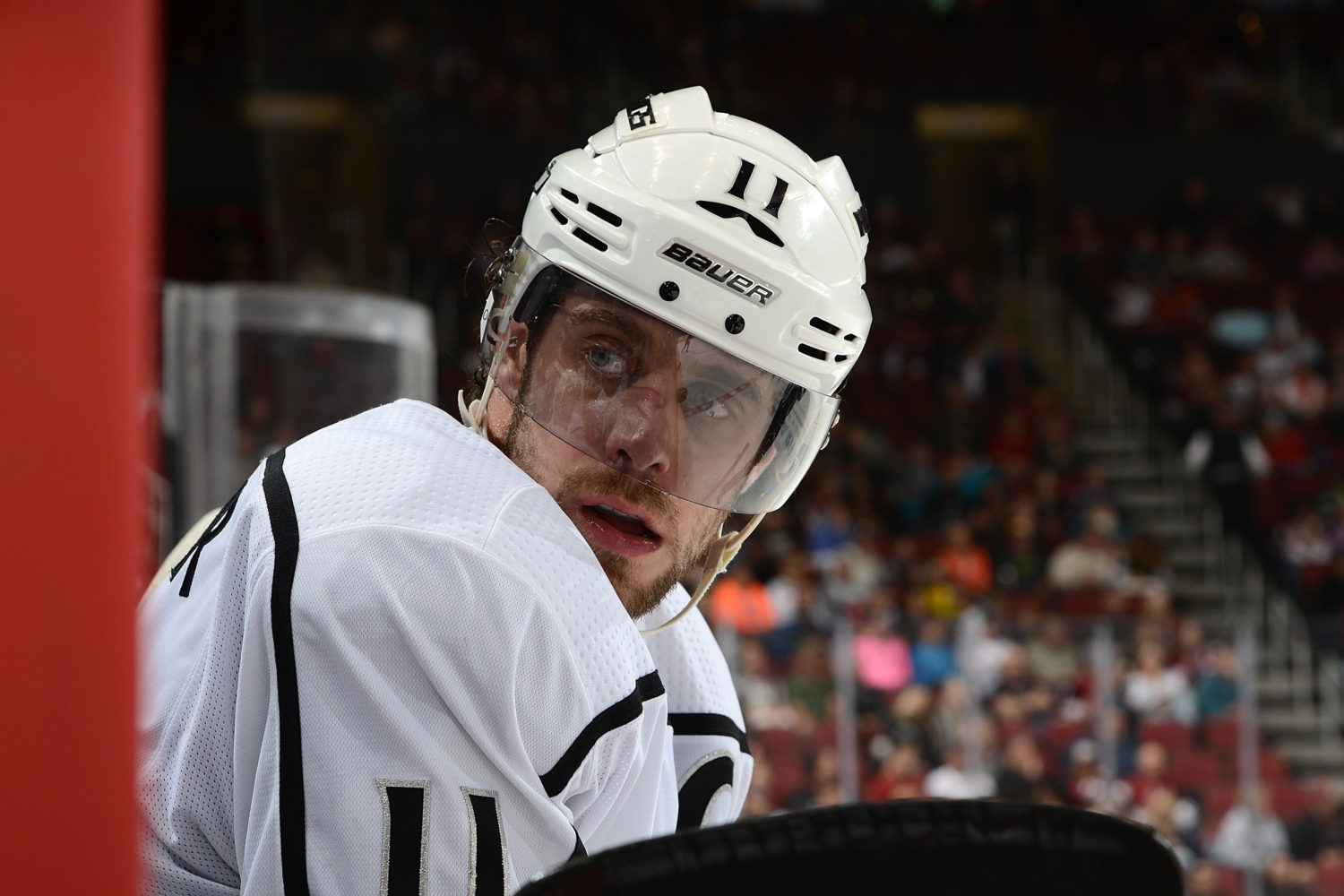 On whether Anze Kopitar is a legitimate Hart Trophy candidate:
In my mind? Absolutely. I’ll ask you a question. Who’s more important to another team in the league than he is to ours? I think his performance has been outstanding. I think he’s a key guy in every situation you can imagine in a hockey game. He provides leadership for our team. He produces offensively. He’s a premier penalty killer in the league, a faceoff guy, a power guy, a skill guy. I don’t see any reason why he shouldn’t be in that conversation. [Reporter: Without him, where would this team be?] Well, you know what, I never want to go there, because I wouldn’t want to imagine our year without a guy like Jeff Carter in the lineup, or without Drew Doughty in the lineup for an extended period of time. We’d like to think your team game absorbs some of the things that he’s put in place here and people around him, but he’s a real important guy on your team. You’re trying to replace 21 minutes of your team in key situations, I think is difficult, but I would’ve said the same thing about Jeff Carter, too. We’ve had some people that by committee have done a good job of filling in for the absence of a guy like Jeff, but there’s no question, when you’re talking about your key guys on your hockey team – Quickie last year, how taxing it was, Jeff out of your lineup this year, and how taxing it is – with key guys like Kopi and Drew, you don’t replace those guys by filling in a player. It ends up being done by committee. He’s a really important guy on our team.

On whether Thursday was a good representation of Jake Muzzin’s physicality and defensive play:
For sure. I think Muzz, when he’s involved physically, it kind of feeds the rest of his game. I think he has a confidence in what he’s doing out there. I think he takes great pride in being a really good defender, I think he takes responsibility when you put a kid with him, like we did with LaDue. So, I think we’ve really asked guys like Muzz and Marty to provide leadership for us, understanding what his identity as a player needs to be, and getting his own game in order so he can lead, and I think Muzz has done a good job with that.

On Paul LaDue’s performance:
Yeah, really happy with Paulie’s game, just the fact that he was ready to go. That’s a tough game last night. I said last night, you wouldn’t know that Detroit was out of a playoff spot, how well and how hard they played last night. I thought Paulie came in in a really hard, fast game and kept up. He was really good with his defending, he did a good job moving pucks. Obviously got a puck to the net there off a faceoff that was a big goal in the hockey game to get us going. But, just his overall game, I thought he had confidence with the puck, I thought he was sound the way he defended. The thing he’d like to learn from was the penalty he took at the end of the period. The buzzer goes, there’s no reason to put yourself in a situation to take a penalty, but outside of that, we were happy with his performance.

On whether Detroit made adjustments after the Kings took the first six shots and led, 1-0:
I just think it was a tight period, overall. It seemed last night there was a lot of near-misses where there were some execution plays where we had pucks on our stick. Tanner had a play on a rush that I think when we’re sharp, that puck’s on and off his tape and there’s a good chance it’s going in the net. I just thought it was a tight game, and we got pucks forward, and we were able to get pucks to the net. They had some chances earlier where we turned pucks over where we got in the way of the puck. We had a wall turnover where Zetterberg had a puck coming off the wall where he was in good scoring position where we just got in front of it. I just think it was one of those games where it was tight. It wasn’t as if it went from no shots to 20 shots apiece. I mean, the number of shots after two periods was really low. I thought that game was extremely tight. There wasn’t a lot of space out there, so sometimes if you go from giving up one shot to two, you’ve doubled the amount of shots you’ve given up, but it’s still a small number to a small number, right?

On whether “consistency” is one of New Jersey’s biggest strengths:
Yeah, absolutely. They play a fast, hard game. I think they’ve added some size through their lineup. They’re extremely deep, and I would say new players, they’ve really trusted and got a lot of production out of new players. Some of those new players are really young players like Hischier and Bratt, and some of those players are journeyman players like Coleman and … Gibbons. They’ve been terrific. A couple of those guys are a little bit older. They’ve been around the minors for a little while, and a couple of those guys are young kids, but they’ve really trusted those players in key situations and they’ve been rewarded for it, and I think because of that, they’ve become a really deep team. They play fast, they play hard, they check well, and they can amount an offensive attack beyond one line that you need to be ready for and you need your whole team to be ready to play.

On Taylor Hall’s evolution, and whether it comes as any sort of a surprise:
It’s probably not the numbers that surprise you. As a young player, he’s always been a force to be reckoned with. He’s always been a guy you’re concerned about when you play against. He and Drew have had some great match-ups over the years, and he’s as much of a concern as an individual in my time here as probably as anyone. He’s just a terrific power forward that’s a threat every time he’s on the ice. I just think his consistency is probably the one thing that’s different this year from a young player, and it’s just how hard he plays without the puck, He just seems to be committed to the team game, and he’s obviously a threat offensively, but I think he’s a guy they can count on on both sides of the puck, and I think his 200-foot game right now is probably more sound than it’s ever been at any point in his career.