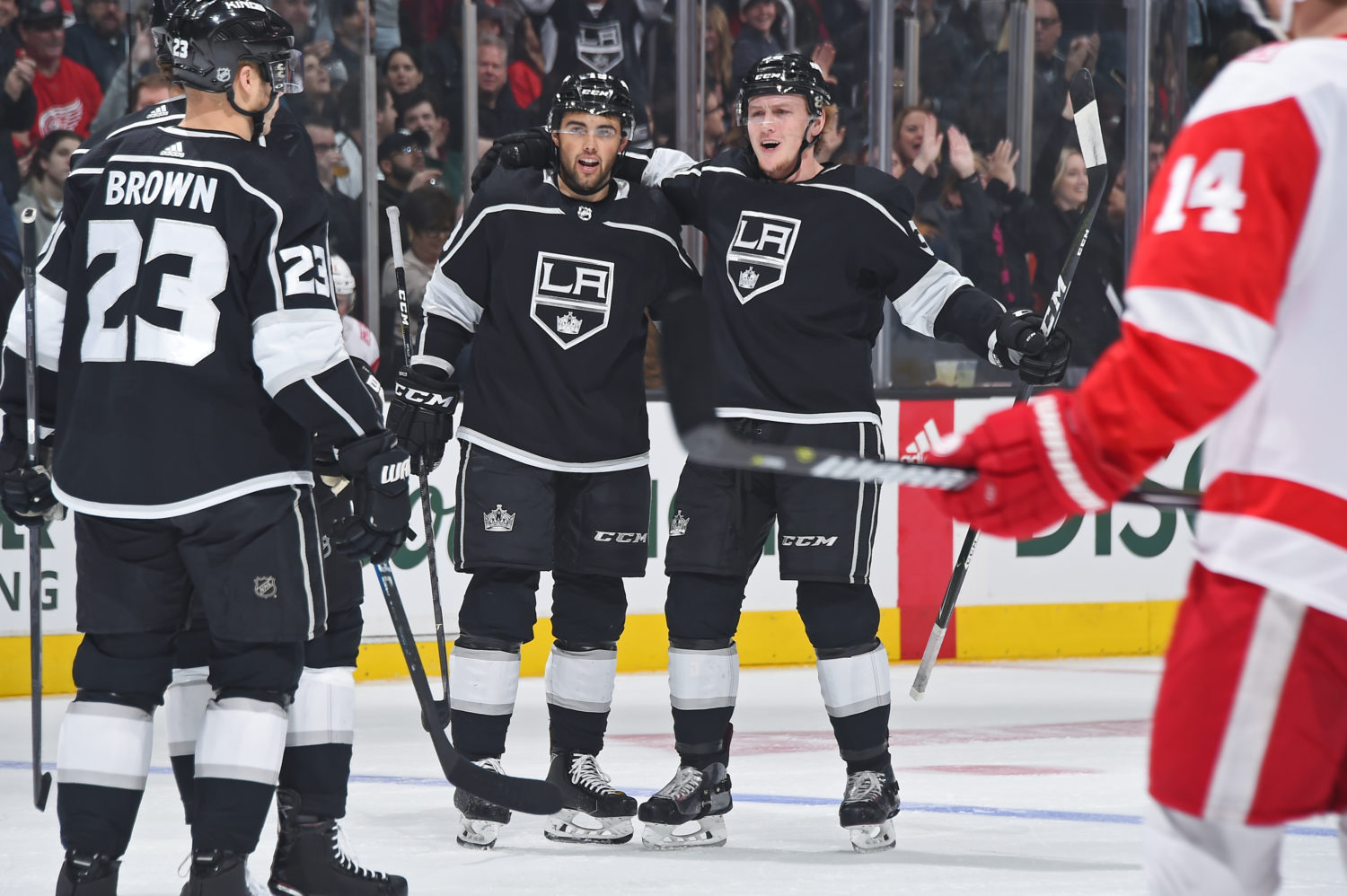 Anze Kopitar, on his fluky game-winning goal:
Well, it was definitely an odd one. We’re trying to get some stuff going there. It was late in the power play, and the play just really happened. I mean, you’re trying to get possession, you try to take the puck to the front of the net and then see what’s up, and I think he hit it off my stick and I think it grazed my arm or something and landed on the top of the net and then rolled over to his back and it just kind of rolled in. It was definitely one of the strangest ones I’ve ever scored. [Reporter: When you say, ‘he,’ are you talking about the Detroit player, or Dustin?] Yeah, it was the Detroit player. We kind of whacked sticks, and then he hit it on a perfect angle right onto my stick.

Kopitar, on earning the win during a tight third period:
I honestly thought it showed character. Going into the third and taking a penalty late in the second, obviously you have to start of on a kill, and we gave up that goal but bounced right back. It showed resilience and character of this team that we don’t get discouraged, and we got the job done. That’s the bottom line.

Kopitar, on whether the game-winner was “karma” for the puck-off-the-netting goal in 2014:
Well, this one’s legal, right? The other one shouldn’t have counted. But, yeah, maybe a little bit of karma, yeah. [Reporter: You looked like you were the most surprised in the building when you saw it go in.] Well, I was right there, and actually, I think when plays like that happen, it’s kind of in slow motion, and I was right at the post seeing the puck tumble and was like, ‘uhh, what’s going to happen, can I get a stick on it?’ and then I saw it kind of roll down his back and started celebrating, I guess.

Paul LaDue, on returning to the lineup after an extended absence and scoring a big goal:
Yeah, it was unbelievable. It was a tough stretch there, but the team was doing well, and you’ve just got to stay ready, and to come out and get that win tonight, it felt unbelievable.

LaDue, on what he thought he showed John Stevens in his first game back:
I don’t know, I just went out there and played my game and tried to help the team as much as I can and who knows what’s going to happen from here, but I thought it was a good win and it was a good night.

LaDue, on whether he was trying to snap a puck quickly to the net or find a spot to shoot at:
I was just trying to go to that left side. I saw that was open, but I think the forward went down on his knee and that was kind of the only lane to get it by him. I don’t think the goalie saw it, but I was pretty happy that it went in.

LaDue, on what it’s like getting into an important game in the middle of a playoff push:
Oh, it’s unbelievable. This is my first playoff run here, so it’s something special, and I’ve got to take a lot of things away from it, but tonight was great, and we’ve just got to keep moving forward and get another win on Saturday.

LaDue, on whether he made contact with the opposing player’s face on his high-sticking call:
It did get him up high, but I don’t think it hit his face, either. The ref saw what he saw, and he made his call, but I’m just glad we were able to rally back after that [power play] goal and get the win.