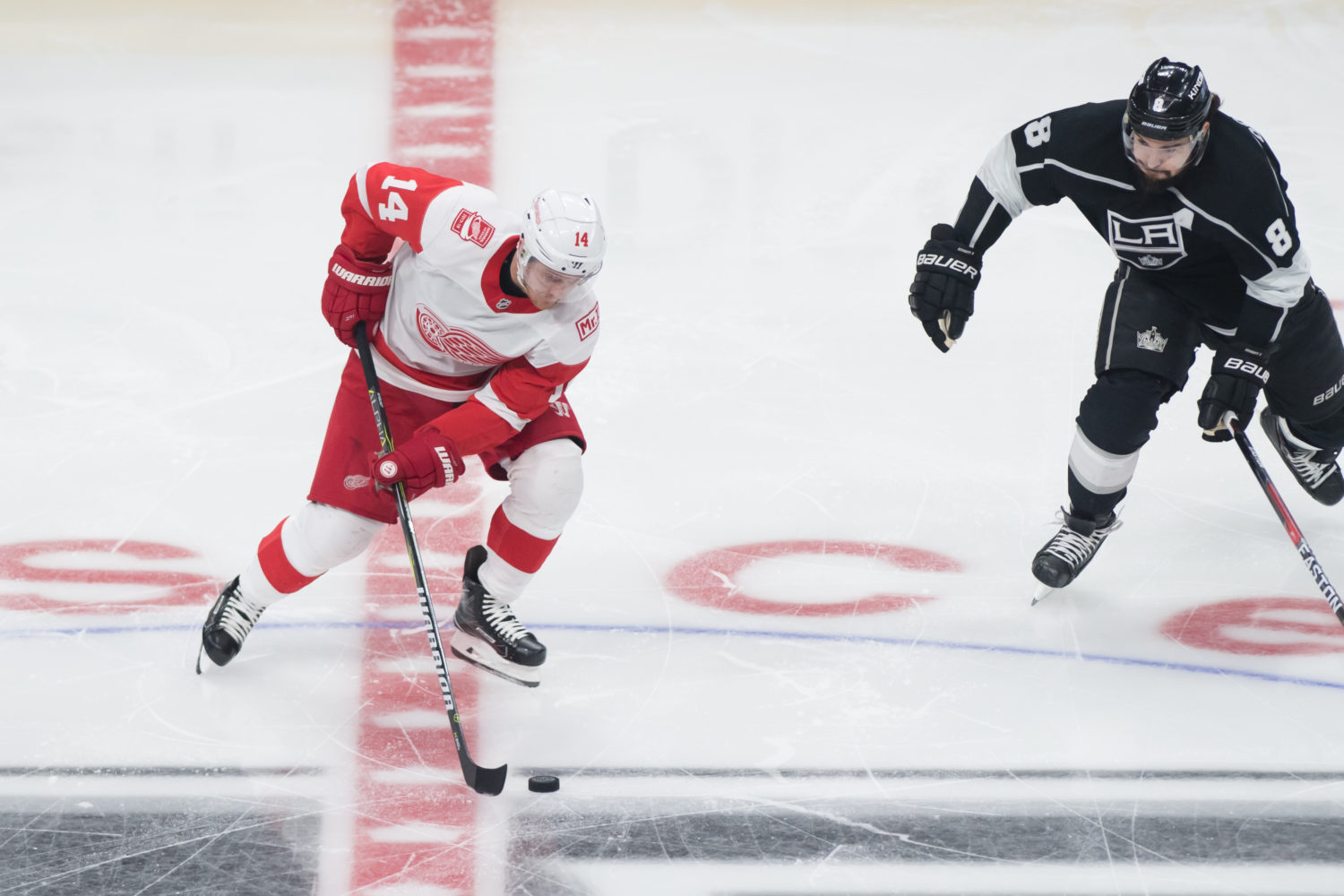 On whether he thought it would be the Kings’ night when Anze Kopitar scored his fluky goal:
Well, you know, it was a hard game, to be honest with you. There wasn’t a lot of room out there for either team, and it was just one of those game where you just kind of stay with it and hopefully you catch a break. We obviously caught a break there. Not often do you see a play like that. Maybe it helped us out the goalie’s so tall, but it was a hard game, and I thought our best players led the way tonight, and Kopi’s certainly one of them.

On the challenges of playing a team like Detroit that’s not in the playoff race:
I don’t see a whole lot of difference, to be honest with you. Give those guys a lot of credit. The team played really hard tonight, it was really well prepared. Really tough on the puck, PK was extremely aggressive, as aggressive as we’ve seen in a while. You wouldn’t have known it if you didn’t check the standings and you watched that game tonight. You wouldn’t know that team was out of a playoff spot because they played like they were fighting for one.

On how pleased he was with the third period of a close game:
Very. I mean, I think you’ve just got to stay with it. This time of the year it might take you all day to get the two points, but you want to make sure you stay with it and continue to do the little things well, and I thought we did that. That’s an important game for us here. We’ve got a few games left at home before we head out on the road. We all know how tight the race is. Games aren’t easy. Not going to be easy. Nice to get the first goal tonight for a change and take advantage of it and not have to chase the game like that, but it’s a good two points.

On how nice it was to see Paul LaDue score after an extended absence:
Good. I mean, he did that in one of the last games he played in a very similar situation. Paulie’s a good player. I mean, Kevin, the guys not playing right now, that’s the hard part. The guys not playing we still think they’re important guys to our team. We still really put a lot of attention to detail to making sure they’re ready and getting the work they need so they can stay sharp. You look at Kev, you look at Paulie, you look at Andy, Michael’s been in and out, they’ve worked extremely hard to stay sharp so they can come in and help us, and it’s a credit to Paulie and the worke he’s done that he was able to come in in a game like that that’s a hard, fast game and be a good player.

On whether he wanted to get LaDue in to take advantage of his offensive skill set:
Well, just with the schedule, we think he’s really efficient at moving pucks and he defends really well. He’s a little bit of Martinez where he can defend really well, he can seal plays down well in his own zone and he can use his feet to make plays. He didn’t get any power play time tonight, but we had four guys that were playing in those situations ahead of him. We had full confidence that we could use him in those situations and really learn to trust him. We think he and Muzz have played well together. Same thing with Foles. We think Foles has played well, but we just thought it was a good spot to put him in, and we thought he could help us, and he did.