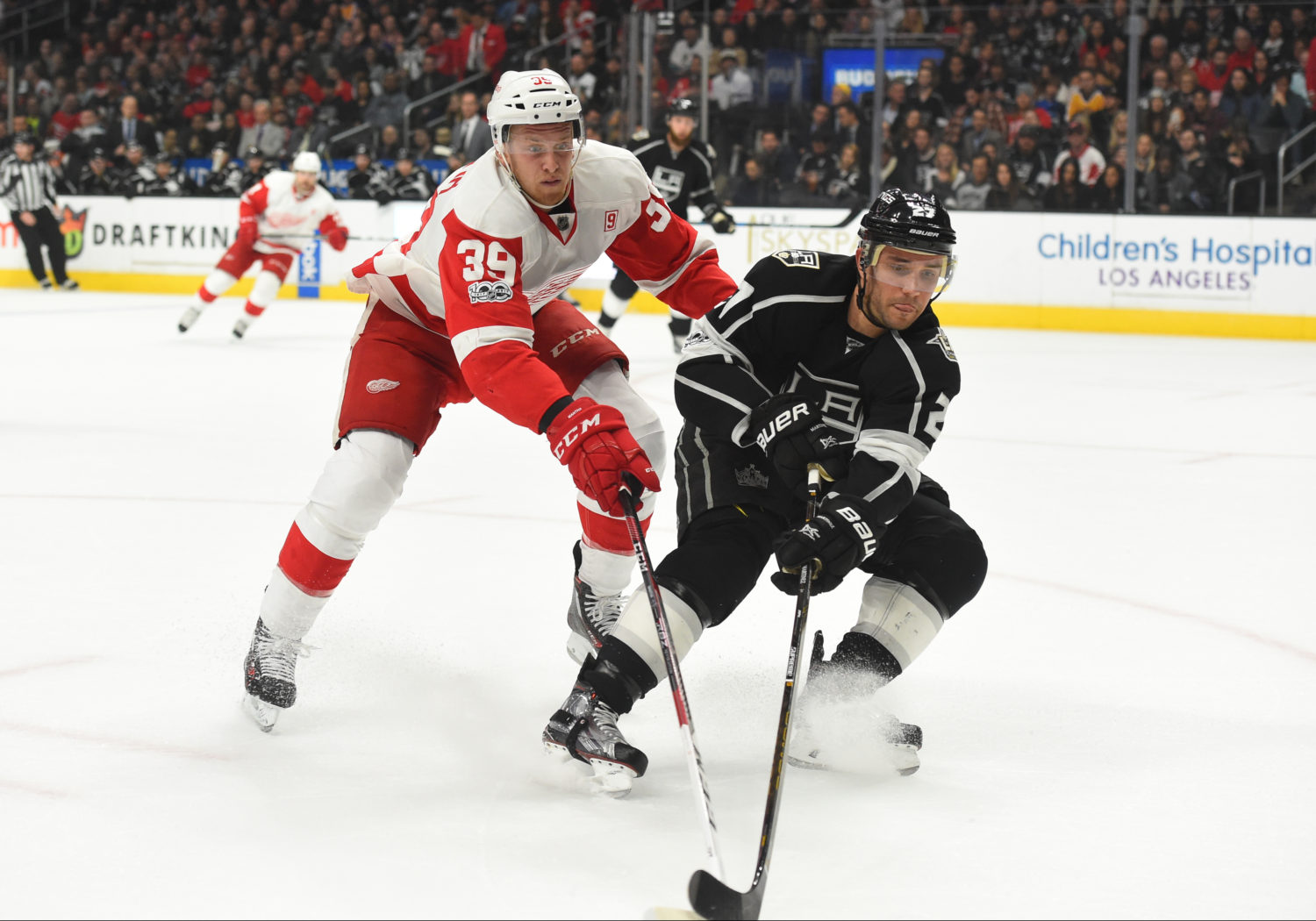 Beware the Ides of March, Insiders. After a recovery day, the LA Kings took the ice at 10:00 a.m. this morning – in advance of tonight’s rare 7:00 p.m. Staples Center start time – and should match up thusly against the Detroit Red Wings (NBCSN / KABC 790 / I Heart Radio):

-The vitals: Jonathan Quick was the first goaltender off the ice and will be expected to start. He’s 9-13-1 with a 2.83 goals-against average and a .907 save percentage in his career against Detroit. Kevin Gravel, Christian Folin, Torrey Mitchell and Andy Andreoff remained on the ice for extra work with Jack Campbell, so they’re likely out of tonight’s lineup.

-Their vitals: Jared Coreau is likely to start for the Wings, per Helene St. James. He has primarily played in Grand Rapids this season and has a 3.63 goals-against average and an .884 save percentage in 16 career games for Detroit but shut Los Angeles at Staples Center last January. The Wings are essentially healthy and should be getting Frans Nielsen (concussion symptoms) back tonight after a three-game absence. At practice yesterday, they showed a lineup that suggested Bertuzzi-Zetterberg-Nyquist, Mantha-Larkin-Helm, Athanasiou-Nielsen-Abdelkader and Svechnikov-Glendening-Frk up front with defensive pairings of Ericsson-Daley, DeKeyser-Green and Kronwall-Jensen. Detroit is 0-6-1 in their last seven games.

-Tanner Pearson has four goals in his last six games, bringing his total on the season to 14.

“When you do the right things well, you get rewarded,” he said. “It’s funny how the game works. Especially the last two games, our line has done really well creating offense. We’ve got to stick to doing the little things in our own zone right and get lots of pucks going the other way.”

Winning boards battles and screening goaltenders are indications that his game is going just fine. He’s on pace for 182 shots, which is just a hair off last year’s 80-game total of 187. He won’t hit last year’s career-high of 24 goals, but with 21 assists on the season, his next helper will set a new high in that category. For whatever reason, even as the Kings’ offense has improved, the puck simply hadn’t found the back of the net after leaving Pearson’s stick prior to his recent burst. His surge in scoring has lifted his shooting percentage to 9.0%; the high-percentage shooter had finished at 17.6%, 10.9% and 12.8% in the three years prior, beginning with 2014-15.

John Stevens was asked an interesting question this morning: how much more upside might Pearson have?

“That’s a good question,” Stevens said. “I talked to those kids just the other day, and I still look at them at kids, but they’re really veteran players that we rely on now, and we’re looking at them for some secondary leadership on our team because they’re playing with a young kid. I looked at Muzz and Marty that way forever. They’re just young kids, but they’re not kids anymore. They’ve grown into established pros. [Tanner has] shown an ability to score in the mid-20’s in terms of goals. He’s shown an ability to kill penalties and play on the power play, so we would call him an all-situations player. The thing we want to see is consistency. You don’t want to see long stretches where you don’t score, you don’t want to see stretches where you play drops off, and I think the real key to a really good, established player to reach his potential, just like a team, is going to be consistency in his play.”

With a CF% of 51.7% and a CF%Rel of +2.4%, there are no indications that Pearson’s down year offensively is anything other than an anomaly, and his recent surge a simple market correction of a wonky shooting percentage earlier in the year.

–The OHL’s coaches poll is out. There is an impressive number of Kings prospects to feature prominently:

-The LA Kings conclude a four-in-six stretch (or continue a five-in-eight, depending on the eye of the beholder) with a challenging game against, well, a team that has lost seven in a row. Since winning at Madison Square Garden on February 25, the Red Wings have gone 0-6-1 and have opened five consecutive road games with regulation losses in Columbus and San Jose.

The schedule is the schedule, as John Stevens has said, but at this point of the season, is it generally preferable to avoid the teams limping in to games whose postseason fates have already been determined, out of the general recognition teams forced to play spoiler have the reputation of being tricky and dangerous?

“To be honest, I didn’t know that they were on a seven-game losing streak, and I think at this point of the season, we have to worry about ourselves and what we’re doing,” Jake Muzzin said. “Especially on home ice, we have to dictate the play, be it our game, as opposed to their game.”

The Red Wings present their own set of challenges when compared to teams such as the Blues or Blackhawks, who were not playing their best hockey when they visited Staples Center. They’re not even in the same boat as the Canucks, another group whose injury issues had derailed what had been a promising start to the season. Detroit is fully healthy, and with Frans Nielsen expected to return from injury, will match up with a center group of Zetterberg-Larkin-Nielsen, giving them good skill, speed and responsible play down the center of the ice. They’ve also had two full days since their last outing, a 5-3 loss at San Jose.

Is there anything specific about tendencies – whether tactical or more emotional – that teams on longer losing streaks exhibit?

“I’m not sure,” Stevens said. “St. Louis came out here the other night with a skid and played extremely well. Sometimes you’ll count a team that’ll almost just hit a reset button and comes in with all kinds of energy and confidence, just saying, ‘were just going to play our game’ because they were worried about other things before. But, I think every situation’s different. Sometimes schedules dictate how teams coming in. They’re coming off a two-day break here, so I would expect them to be revved up and ready to go and get a really good game. I don’t think any one situation is exactly the same. I think teams struggle at different points of the season for different reasons. Sometimes there’s things going on behind the scenes that nobody’s aware of that effects the spirit of the hockey team. But, I do think, when you’re playing a team like that, whether a team’s on a roll or a team’s struggling, I think the first 10 minutes of the hockey game can have a big impact. You can’t win the game in the first 10 minutes, but you can lose it. You want to make sure you’re ready to go.”

-A brand new Kings Weekly is upon us, Insiders. Tonight’s table of contents:

Forget #MarchMadness because #BarkMadness is where the real competition is 🔥 WHO YOU GOT?! @LAKings

J/k, Insiders. Alex Curry and Carrlyn Bathe, with the fine touches from producer extraordinaire Jack Wilson (I owe him money), chat with Tobias Rieder, kick off the Lil’ Kings program, share sights and sounds from both Jim Fox and Sang Yoon Food and Wine Event and Pride Night, and, yes, listen to the players advocate for their dogs to win this year’s Bark Madness tournament.

-Tonight’s officials are referees Tim Peel and Ghislain Hebert and linesmen Ryan Gibbons and Darren Gibbs. Alex Faust and Jim Fox will have tonight’s call on NBCSN. Pia Toscano will sing the national anthem. Enjoy your Thursday, Insiders. Los Angeles is always the most beautiful after it rains, but not even close to as beautiful as you.