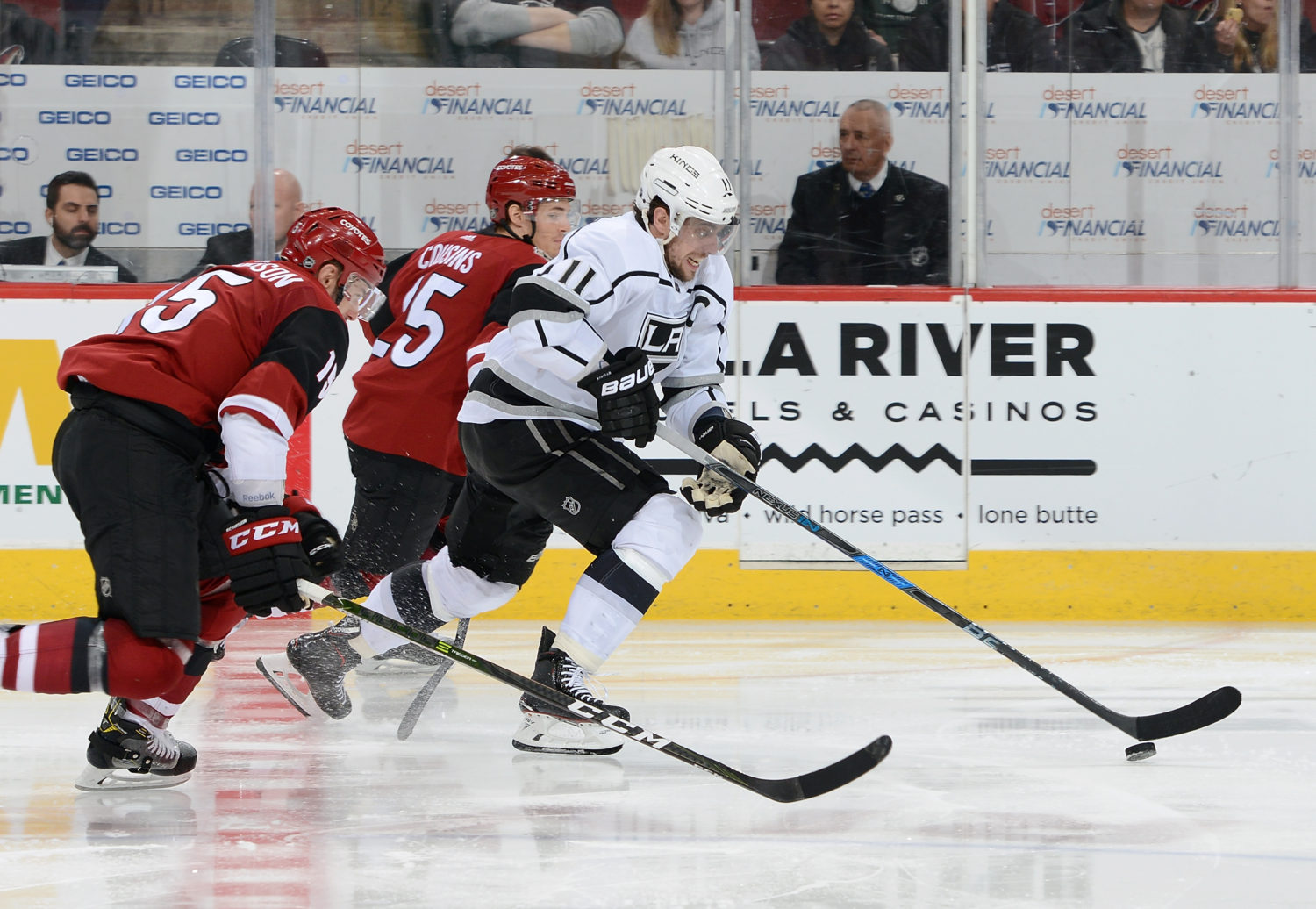 Drew Doughty, on whether the team is happy with getting a point:
Well we’re happy with it now because we had to come back from whatever it was, three-one, three-nothing. But disappointed at the way we started the game. Yeah, they had the lead and we wanted the lead obviously to start it off, so we’re disappointed in a way, but at the same time we’re happy we came back and we had a lot of opportunities to win that game.

Doughty, on the controversial play in overtime:
I’m just driving the net you know trying to hopefully bang in a rebound or whatever it may be. You know, I’m trying to stop and I’m obviously getting pushed by the guy behind me so I don’t know whether that should count or it shouldn’t count. I honestly have no idea, but I tried to stop and not hit the goalie. It wasn’t intentional or anything like that. I clearly, my momentum was going that way and I got pushed from behind. So I don’t know if that should count or not, but whatever, it’s over and done with.

Doughty, on the confusion over whether his overtime goal was going to count or not:
I had a feeling that when the crowd started cheering and then he didn’t really finish his sentence, I had a feeling they were going to say something went wrong. But yeah, it sucked. I thought we won for a second and then it didn’t work out that way so that sucked.

Doughty, on Campbell’s performance:
He played great for us. He’s a great goalie, you know I think he deserved to be in this league earlier than he really has gotten the chance to be in it, so he’s one of the hardest-working players I’ve ever had the pleasure of playing with and one of the best teammates I’ve had the pleasure of playing with. So he played great tonight, he kept us in the game, and you know, happy to have him here for the rest of the season.

Doughty, on him and Carter “putting on a clinic with the shot deflections”:
I think the first one just hit him, so I don’t know if that was like a clinic or not. And then the second one, obviously made a good tip. You know, the second one I actually see him there, but the first one I’m just trying to get a puck to the net and got a lucky deflection. But you know that’s the way Carts is. He isn’t the prettiest goal-scorer sometimes. You know, he’s got a great shot and stuff like that, but he gets a lot of garbage goals and that’s because he knows where to be and that’s because he goes to the net and that’s why he scores goals. So I’m not surprised that pucks go in off him because he’s always in the right spot.

Adrian Kempe, on whether the team is happy to pick up a point:
Yeah, I mean, I think we’re a little happy that we came back. I think we did a good push in the third there for sure I think we had chances to score one more goal there in OT, but at the end of the day we’re pretty happy that we came back so we got one point. We wanted two, but we got one today, so yeah, let’s move on and learn from this game what we can be better at.

Kempe, on whether the first part of the game was just them getting their legs back:
I mean it’s tough to play back-to-backs. It’s two games in two days. It’s going to be tough, but I think they came out hard and they have played pretty good the last couple of games and we were really ready from the start, but I think we started figuring it out after a couple, after the first period there. And yeah, as I said, it was a good comeback in the third. We wanted two points, but we got one today so that was–I mean we’ve got to be, we’re pretty happy with that.

Kempe, on how the team felt about the overturned goal in overtime:
It’s tough. I think everybody thought it was going to be a goal, but we didn’t see goaltender interference, but I mean we had a four-on-three after that. I mean that’s a good chance for you to win in OT so, yeah, that was a tough call, but it’s hockey.

Jack Campbell, on only getting one point tonight:
I mean, I think we’re a competitive team. I don’t think we’ll ever be happy with just a point and you know I’m really happy with how the guys fought all sixty minutes and into overtime. I’ve just got to make a couple more saves and we get two points.

Campbell, on if he’s ever experienced a shootout at the NHL level:
Never. So it was an experience, but obviously some pretty good moves. But I’ve just got to get better and make sure to stop them all next time.

Campbell, on whether he got any quick scouting tips before the shootout started:
To be honest, I kind of just like playing, I don’t really like thinking too much. So obviously if we have video on a tendency we’ll watch it, but there wasn’t really too much of it. Just kind of go on the play and you know made a couple nice moves, but I’ve just got to come up with the save.

Campbell, on the resiliency of the team:
I mean it’s such a great group in here and we don’t give up. And, you know, that’s a tough game. They obviously have a really great record in the last fifteen games and they’re playing really well, so they go up early on us and I’m just proud of the way the guys fought and I knew we had the group in here to come back.