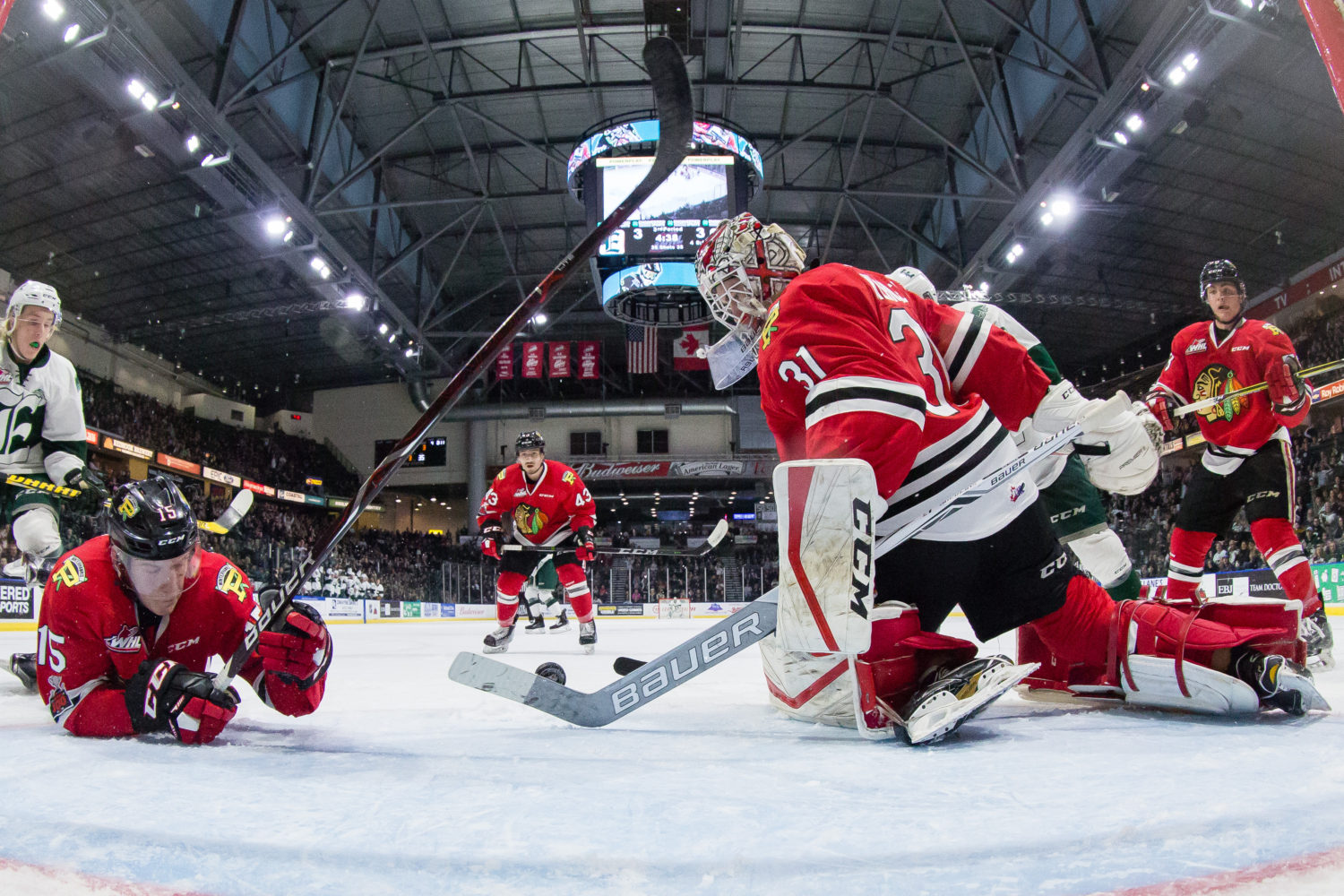 It’s a game-day, Insiders. The Vancouver Canucks make their second and final Staples Center visit to close out the teams’ season series (7:30 p.m. / FOX Sports West / FOX Sports GO / FUBO TV / KABC 790 / I Heart Radio). Vancouver has won two of the first three games in regulation, so a Los Angeles win forces a series split. More importantly, L.A. is one point out of the second wild card (having played the same amount of games as Colorado), one point out of the third divisional slot (with a game in hand on Anaheim) and two points behind the second divisional slot (having played the same amount of games as San Jose). The Kings (35 ROW) are well clear of the Sharks (32 ROW) and Ducks (30 ROW) in the regulation/overtime wins tiebreaker, but currently tied with the Avalanche. Anaheim host St. Louis tonight, while San Jose hosts Detroit.

-The vitals: Monday’s morning skate was optional after Sunday’s full team practice. Related: Los Angeles is in a four-in-six with a back-to-back set that opens up tonight. “We’ve still got a heavy schedule this time of the year, so it’s all about getting ready to play games, and optional skates or morning skates for me, whatever you need to do to be ready to be a good player at night is what you need to do,” John Stevens said. The Kings are 6-4-1 on the first night of back-to-back sets and 7-3-1 on the second night. It’s not crystal clear who will start in goal. Jack Campbell was the only goalie on the ice this morning and was among the first skaters to leave, so there’s the raised possibility that he could face the Canucks. Those who remained on the ice for varying levels of extra work were Paul LaDue, Kevin Gravel, Andy Andreoff and Michael Amadio. This is most certainly a wait-for-the-song-type of a lineup projection. Click here for the forward groups shown at practice yesterday.

-Their vitals: Vancouver is banged up. They’re without Brock Boeser (back), Chris Tanev (leg), Loui Eriksson (rib), Sven Baertschi (shoulder), Brendan Gaunce (foot) and Mikael Granlund (ankle). Tyler Motte will draw in for Jussi Jokinen, while Anders Nilsson will start in net. Nilsson is 1-10-2 in his last 15 games but picked up a win at Staples Center by stopping 30 of 32 shots on November 14. That was a game in which the Kings led 2-0 before the Canucks registered their first shot on goal, if you’re looking for a woulda-shoulda-coulda moment this afternoon.

If you remember back to the end of the 2013-14, Doughty missed the final four games of the regular season with a shoulder injury that may have triggered a temporary breakdown or two across the fanbase. (Spoiler: Los Angeles went on to win the Stanley Cup that year.)

“As long as you take care of yourself, and when you do get bangs and bruises, as long as you take care of those, we have great trainers. In this organization they take great care of you. Like I said, you’re just maintaining all those things, you’re coming to be fine out there. Injuries and stuff happen, but you’ve just got to play through ‘em sometimes, and I’ve been fortunate enough that I haven’t had any serious ones lately, so hopefully it continues.”

Doughty shared his brutal honesty when asked whether there was a “pride factor” attached to his games played streak.

“Yeah, obviously,” he said. “I’ve been kind of [—-] on in my career for not being in shape and being one of the guys who’s the worst in shape on the team, so to be able to put that many string of games together, it kind of shows me I am doing something right off the ice.”

It’s not hard to imagine Doughty being on the receiving end of some locker room ribbing with that in mind, but those days in which his conditioning is mocked are long gone. The 2016 Norris Trophy winner’s average time on ice, per season, since the start of his consecutive games played: 29:00, 28:01, 27:09, 26:39.

GAME OVER! @SCSUHUSKIES_MH is headed to St. Paul and the @TheNCHC Frozen Faceoff! Huskies win 4-3 in OT. pic.twitter.com/oqfrWvx2PT

That’s Mikey Eyssimont’s second goal of the game and an overtime game-winner that sent St. Cloud State to St. Paul, where they’ll face North Dakota in the NCHC Frozen Faceoff semifinal Friday afternoon at Xcel Energy Center. The other semifinal pits Denver against Minnesota-Duluth Friday night, with the losers meeting for a third-place game Saturday afternoon and the winners meeting for the NCHC title Saturday night. The championship game will air on the CBS Sports Network. The skilled 21-year-old Eyssimont, selected in the fifth round in 2016, has set career-highs across the board for the Huskies, totaling 17 goals and 39 points in 36 games.

.@LAKings prospect and @pdxwinterhawks goaltender @kehler298 has been named the WHL Goaltender of the Week!

-Though the most recent picture of the team is a forgettable 7-2 loss to St. Louis, that game was not at all representative of the larger-picture developments that are more clearly in focus for a team one point out of a playoff berth.

Anything short of making the playoffs would be a significant disappointment, but the means of reaching that goal indicate that Los Angeles has made strides in what it set out to do.

The Kings’ goals-for per game have raised from 2.43 to 2.87, while their goals-against have risen only incrementally, from 2.45 to 2.54. These adjustments come as offense has risen across the league.

Rankings-wise, Los Angeles jumped from 24th place tie to 15th in goals per game, while also climbing from sixth to a second place tie in goals-against per game. Their goals-against has climbed marginally but to a lesser extent than the rest of the league’s rise.

“Power plays, for whatever reason, have found ways to have more success,” Stevens said. “There’s been 13 power plays at any given time that are operating at over 20% in the league, which I don’t know if I’ve ever seen before. I think we’re all trying to find ways to create more offense. There was a period of time where we were jumping between 15th and 20th in the league, and I think sometimes when you want to score more, it still is relative to the rest of the league. If we’re going to base our numbers today on the mid-80s with the Gretzky era, that always changes. Even from year-to-year it can change.”

The goal at the outset of the year, of course, was to improve the offensive output without sacrificing anything from the team’s tried-and-true defensive identity. That, by and large, is reflected in the statistics, and has been impacted by the team’s 15-7 record in games decided by three-or-more goals.

While the rising tide of offense across the league may be rooted in more potent power plays, Los Angeles’ structure in even strength play has impacted their offensive surge to a greater degree.

“In the past we played more of a possession game, Doughty said. “Now, we just play a moving-forward, getting pucks up. We make tape-to-tape plays still, but for the most part we’re trying to get pucks in deep and just get it going forward. Maybe that’s the reason to why our goal scoring’s up a bit, but other than that I don’t really know. We’ve got some new young players. We’ve got some more guys who are offensively talented and have good vision and have good vision, which I think we lacked in the past.”

Surely Alex Iafallo, who has served as an effective forechecking and puck retrieval cog alongside Anze Kopitar and Dustin Brown, has increased the offense. Kopitar’s and Brown’s resurgences have also been major factors in the improved offense and are representative of the wider effort of not shirking any defensive duties. Adrian Kempe has jumped from a two-goal scorer to a 16-goal scorer and admirably held down the second line center role in Jeff Carter’s absence, while Trevor Lewis set a career high in goals and will eclipse his career-high in overall scoring with his next goal or assist.

“I think the old conversation is you’ve like to see some more secondary offense,” Stevens said. “We still think we can get some more offense from our blue line, which we’d like to get more off, certainly as part of the rush attack. So, we think we’ve made some inroads there, but we’ve still got lots of work to do.”

Defensively, it has helped that Jonathan Quick has been healthy all season and, through February, was backed up by a highly capble back-up in Darcy Kuemper. Los Angeles’ save percentage jumped from a 23rd-place tie at .905 to .920, which ranks third in the league in 2017-18.

“I think our goaltending’s been great all season, and that’s usually where our defense really starts. They make huge saves for us,” Tyler Toffoli said. “…It’s just kind of been the foundation of our team ever since I’ve been here and from before, as well. Just kind of sticking with it and things like that definitely help with the overall defensive game.”