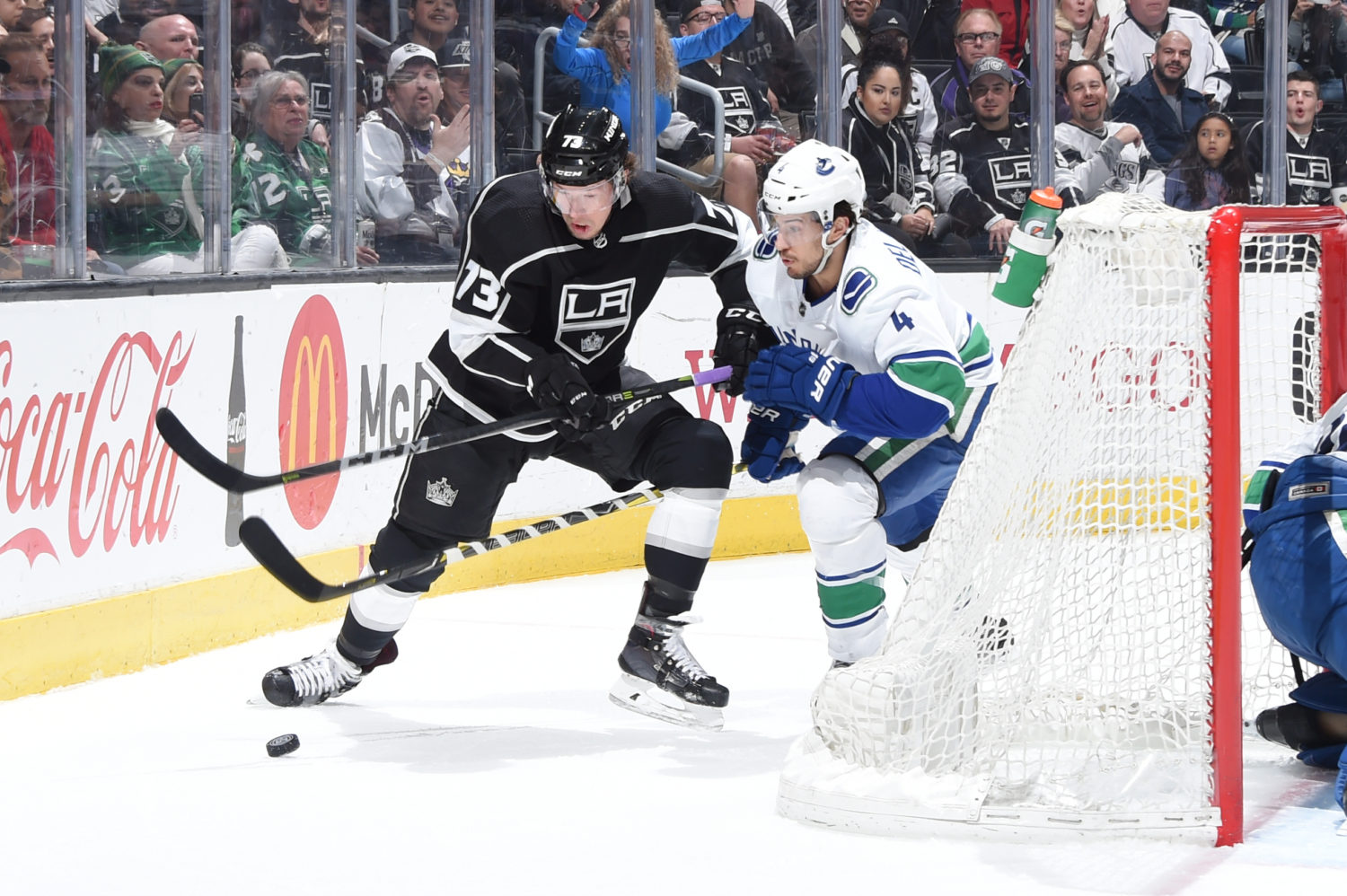 Tyler Toffoli, on how well the team played in front of Quick:
Yeah, I mean obviously you can see by the way the score ended up. We were really confident in our game tonight and came up with a big two points.

Toffoli, on Adrian Kempe centering him and Tanner Pearson:
We’ve played together majority of the season, so it’s nothing new.

Toffoli, on what worked well for them tonight:
I mean we had some good chances and I think we just capitalized. We skated well and just created opportunities and did a good job.

Toffoli, on moving past Saturday’s loss:
Yeah, we didn’t even talk about what happened. Kind of let that go and started worrying about the game tonight and we did a really good job.

Toffoli, on playing a solid defensive game:
Yeah, I think I was not even just the defense. I think it was just play in all three zones we did a really good job of executing our game plan.

Toffoli, on whether he looks at the standings at all:
The standings are in our dressing room, yeah. (Reporter: So you’re aware with the game tonight you know you’re up ahead of Anaheim?) I mean I don’t pay that much attention, I just see where we are, if we’re inside or if we’re outside, and go from there.

Toffoli, on whether the urgency was raised a little in this game:
Yeah, I mean, like I said we just kind of executed what we wanted to do and we shut them down and kind of took away their offense and their rush-play and overall we’re really happy and now we’ve got to move forward to tomorrow.

Tanner Pearson, on what he saw on his goal:
Actually, to be honest, I remember when Juice did it against Montreal and they did a good job of giving us a kind of a scouting job before the game and where to shoot and what to do and so you know, just tried to be patient and let the goalie fall down there and tried to just put it over his pad.

Pearson, on what the shutout does for the team as they head into game two of the back-to-back:
I think when we spend less time in our zone I think it’s easier to win the game. So you know, when we’re quick in and quick out it makes it easier on us and we can go to work on the offensive zone and I mean everyone was playing in the offensive zone, but you know definitely a big game for us and you know we have to keep on racking points here together.

Pearson, on winning in the manner that they did:
I think obviously the last game wasn’t what we wanted and it’s good to get the win here and in a good way too. We had a good solid defensive game and when we’re that way we create a lot of stuff going the other way. So we’ve got to keep looking at this as a positive game and go into the next one like this.

Pearson, on the boost that Toffoli’s goal gave the team:
Yeah, I think anytime you get the first goal it gives your team some confidence and momentum. And you know, Ty on the breakaway there, he’s not going to miss those too often, that’s for sure.