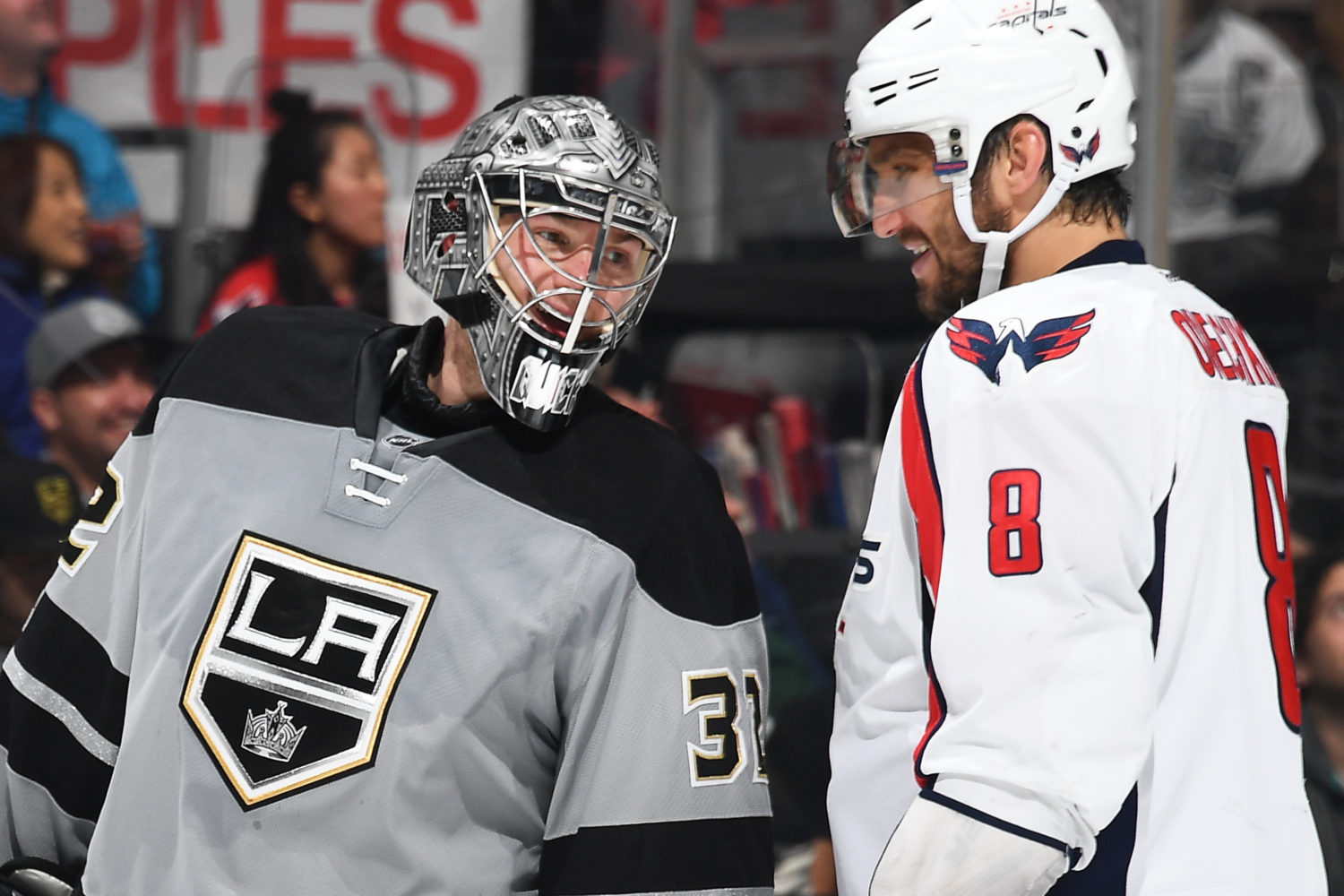 Insiders. INSIDERS. Thursday night hockey is upon us. The Washington Capitals make their lone Staples Center visit of the regular season (7:30 p.m. / FOX Sports West / FOX Sports GO / FUBO TV / KABC 790 / I Heart Radio) and will look to snap a seven-game road losing streak in the series since a 3-2 Caps win on December 14, 2005 in Alex Ovechkin’s first NHL visit to DTLA. Goal scorers in that game were Eric Belanger, Sean Avery, Jamie Heward (x2) and Brian Sutherby. The only players still in the NHL from that game are Michael Cammalleri, Dustin Brown and Ovechkin. Here’s a photo from that night: 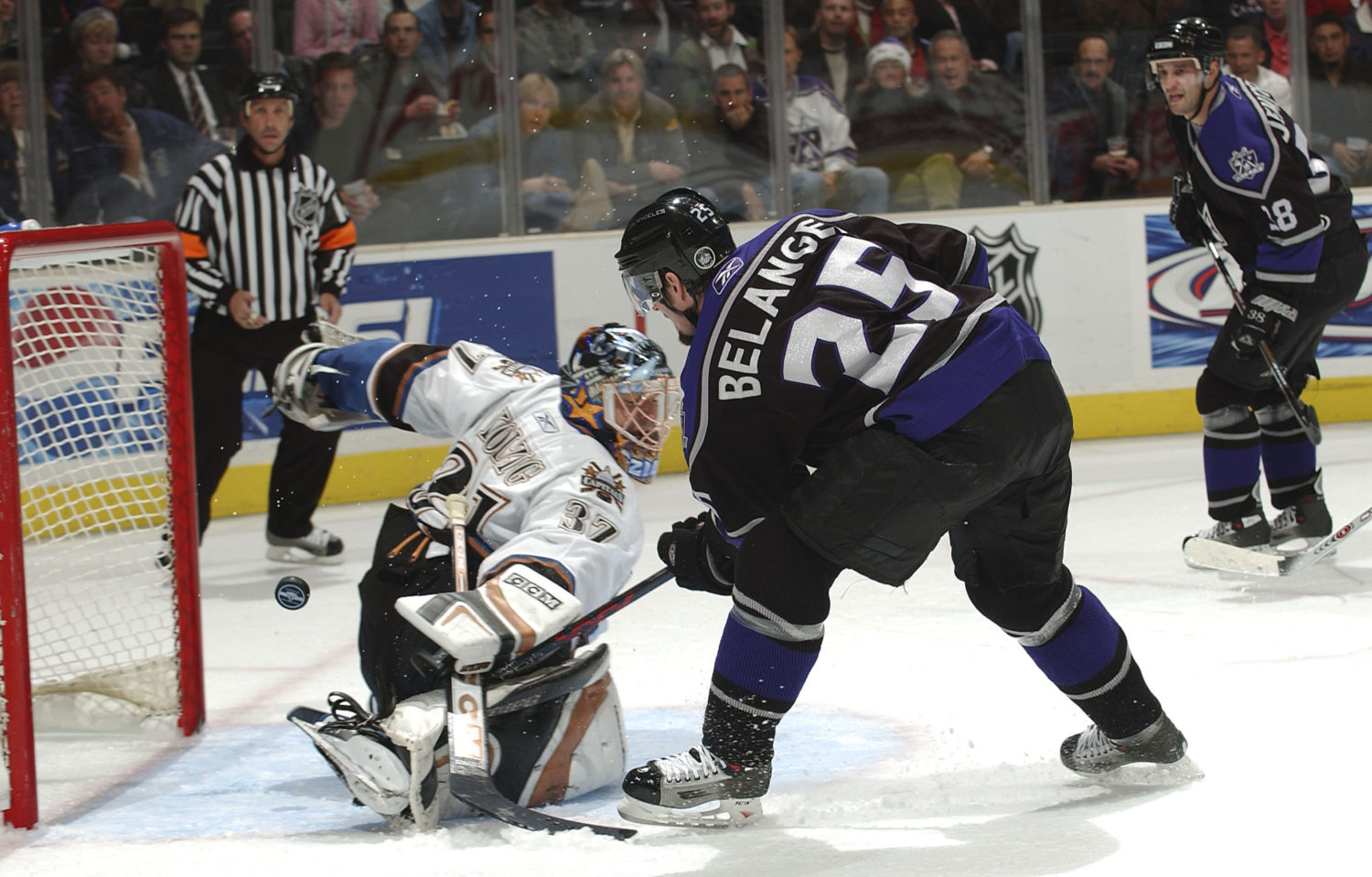 -The vitals: Jonathan Quick left the ice first and will be expected to start in goal. He’s 8-2-0 with a 2.36 goals-against average and a .916 save percentage in 10 career games against Washington. Trevor Lewis (upper-body) appears set to make his return to the lineup tonight after having missed 12 consecutive games after Jared McCann’s shoulder-on-shoulder hit drove him hard into the corner boards during a win at Florida on February 9. “Yeah, he’ll be a game-time decision, but he’s definitely getting close,” John Stevens said. Dion Phaneuf, who missed Wednesday’s practice due to illness, will also be a game-time decision. “We’re hopeful he’s going to be able to go. If he didn’t play, don’t say I lied to you. We’re hopeful that he’ll be able to go.”

-Their vitals: via Isabelle Khurshydyan, the Caps will line up with Ovechkin-Backstrom-Wilson, Vrana-Kuznetsov-Oshie, Connolly-Eller-Burakovsky and Smith-Pelly-Beagle-Chiasson up front and a defensive group of Kempny-Carlson, Orlov-Niskanen and Orpik-Jerabek. Philipp Grubauer, who is 2-1-0 with a 1.34 goals-against average and a .960 save percentage in three career games against the Kings, will start in net. Washington has been rotating young puck-movers Christian Djoos and Jakub Jerabek in and out of the lineup recently, though defensive stalwart Brooks Orpik will retain most of the hard minutes to that player’s left. “We don’t have a lot of size on the back end, a lot of physical attributes,” Head Coach Barry Trotz said, as reported by Khurshudyan. “We’re playing teams that go to the net real hard. L.A. does it really, really well. The [Anaheim] Ducks are a real strong team down low. Columbus is that way. I would say we don’t have a lot of those guys, and Brooks is one of those guys that he just plays defense. … He’s a big body, he can clear people and you’re not going to get any offense really from Brooks. And when you do, it’s a little bit of a bonus.” When Los Angeles defeated Washington at Capital One Arena in November, there was Djoos, Juusi and Juice (as in Christian, Jokinen and Adrian Kempe). Tonight: only Juice.

–Earlier today, John Stevens spoke about Alex Ovechkin’s place in the league and how he game plans against one of the greatest pure goal scorers in NHL history. When puck drops tonight, those tributes will obviously be put off to the side. “You’re just thinking about the game tonight, the team playing well and the team you’re matching up against,” Stevens said. “But he certainly deserves all the accolades he’s getting because he’s been impressive, what he’s done to this point of his career.”

With 598 career goals, Ovechkin is two away from 600. Alec Martinez, who ranks second in the league with 169 blocks this season, may need an extra ice bag tonight given where he’s often stationed when Ovechkin winds up with his trademark power play one-timer.

With a premier player closing in on such a major personal milestone, Stevens was asked whether coaching against Ovechkin will be something he’ll think more about years from now. It elicited an interesting response that called to attention the Kings-Blackhawks rivalry when the two clubs’ zenith of success occurred nearly simultaneously.

“I think coaching in this league is a real privilege, to be honest with you,” Stevens said. “You go in the playoffs series we’ve had, and the opportunity we had to have success here and win Cups and the players that we played against. I mean, I was always amazed going to into Chicago and seeing Toews, Kane on one side with Seabrook and Keith and Crawford and that, and then you look across and you’ve got Kopitar, Brown and Carter, Doughty, Quick in net. They’re just great players that love being in the real competitive games that mean a lot, so I think that’s why we do what we do, and I think that’s what makes it such an enjoyable league and a profession to be in, and really, I feel like it’s a privilege to be in a league where not only do you get to coach against those guys, you get to coach the top players in the world and see the game being played at the highest level of the world.”

-Happy trails, Zach Whitecloud. The NCAA free agent who seriously considered the Kings and attended Los Angeles’ development camp last summer will forego his final two seasons at Bemidji State after having signed with the Vegas Golden Knights. Elliotte Friedman’s always-recommended 31 Thoughts noted that teams made their pitches to Whitecloud this week; when I checked in on Tuesday, I was told that the team was in communication with him but there wasn’t anything to update at that time.

–This is an astounding thread on the KHL and Gagarin Cup Playoffs from Slava Malamud.

-Tonight’s LA Kings Weekly will look back at the International Frozen Friendly, waged between the Ontario Reign and Eisbären Berlin on February 13:

More clips are up at FOX Sports West’s YouTube page.

-Tonight’s officials are referees Trevor Hanson and Gord Dwyer and linesmen Mark Wheler and Lonnie Cameron. Pia Toscano will start the game off with the national anthem. See you at Staples, Insiders.