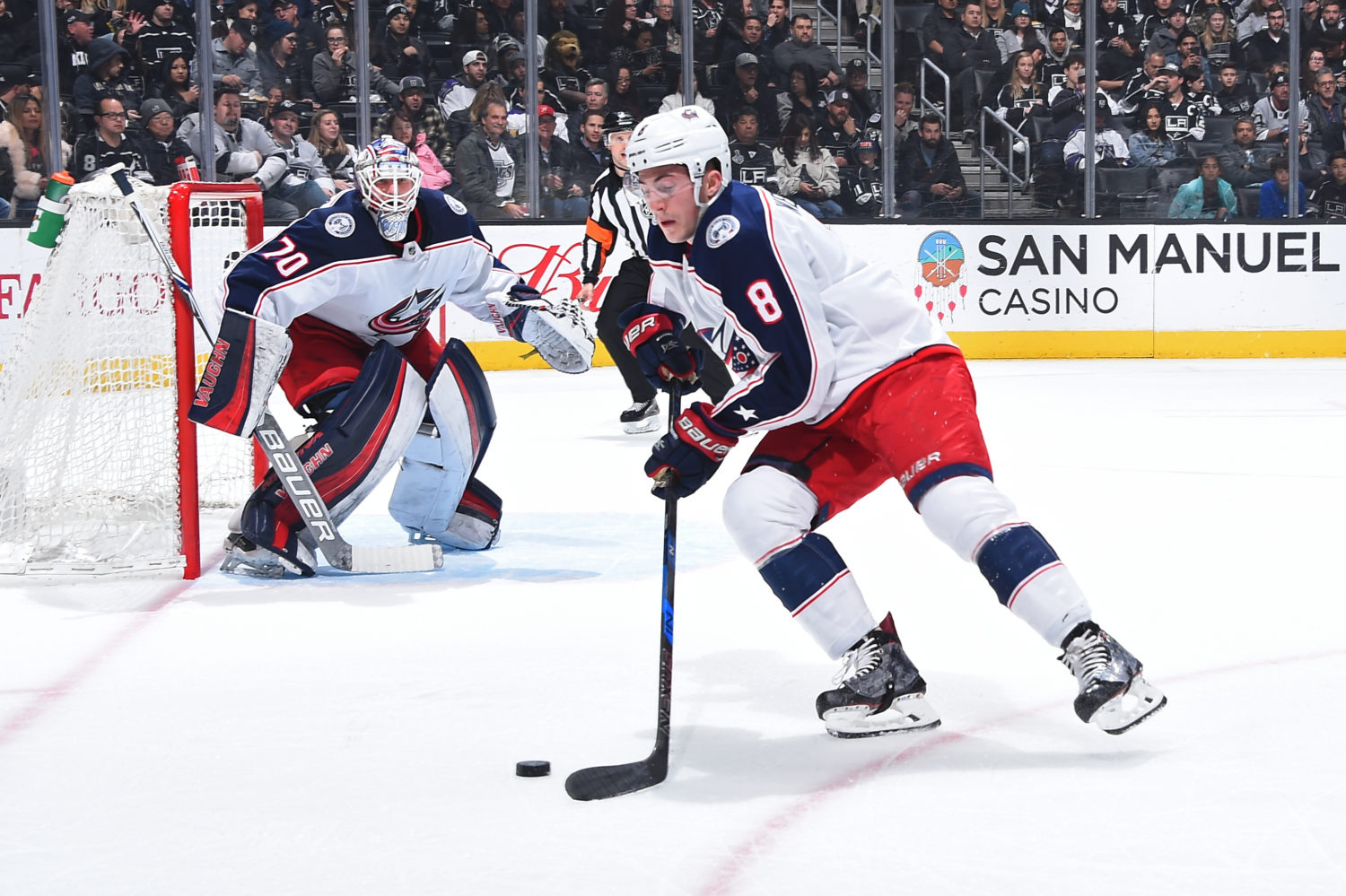 John Tortorella, on whether the Kings changed the momentum after their penalty kill in the second period:
No I thought they took momentum when they scored their first goal. We have a chance, I think that third goal for us is very important. We had a couple great chances. Luc (Pierre-Luc Dubois) comes down the wing, has a chance to make it three-nothing. They score their first goal, they gain momentum, and we just lose our composure. I think we get it back, but I thought Quick played better and better as the game went on. Didn’t make as many plays, didn’t play certainly as well as our first period, but I thought we had some good looks and some good things happen to our game. But we just were—we lost our composure and didn’t fully get it back consistently enough.

Tortorella, on not being able to exit their own zone in the second period:
Well, again, I don’t think the support was there as we had in the first period and they played better and we didn’t have the puck enough. We didn’t make enough plays. I thought there were some plays to be made and, quite honestly guys, I thought we had some, second and third period, I thought we had some good minutes too. But I thought Quick made some key saves at key times.

Seth Jones, on what changed between the first and second periods:
They just played harder. We dominated the first I thought and they were obviously unhappy with that. Like any team would, they’re going to push in the second and we knew that. We just a little complacent I think and it’s not the second period we want after a great start.

Foligno, on trying to get the momentum back on their side:
Yeah, you look at the game and it was basically all momentum swings and then we come out absolutely flying in the first period and play an awesome first and we’ve got to find a way to carry that in. You know they’re going to make a push, and kind of get a nice bounce on the first one, but then they get their game rolling. We just couldn’t really find an answer and they started getting us in penalty trouble and then they took over. So, disappointing because we had some good minutes and some good lines were going and you know, just not the outcome we wanted.

Foligno, on getting chances, but not being able to score in the third:
Yeah and that’s how they play, right? They’ve got a good goalie behind them and we had some chances. Just, you know, couldn’t find a way to get one behind the net. But just know that some of those plays they scored on are breakdowns by us and little things that make a huge difference this time of year and you saw it cost us.

Cam Atkinson, on the physicality of the game:
Yeah, I’m sure that was one of their keys obviously to play physical on us, but it’s part of the game and they really thrive on that as well. The crowd gets into it and, like I said, they took over with the momentum and we just have to find a way to slow the game down.

Atkinson, on being on a line with Panarin:
Yeah, you know what he’s a hell of a player and obviously so is Dubois. So I tried to give them the puck and get open. I tried reading off them and I think we’ve been playing pretty well. I mean we had a lot of scoring chances as a line. You know, Quickie’s a hell of a goalie. He made some good saves on us and you’ve got to tip your cap to him, but you know, I think our line is going right now.

Atkinson, on not having a lot of success against Quick:
You know, I shoot against him almost every day in the summer, but still once you think that you have him beat, he makes those saves where you kind of just throw your head up in the air and say, “How does he make those saves?”

Atkinson, on what makes Quick so good:
He’s one of the best goalies in the world for a reason. He’s unlike any goalie I’ve ever faced really. He’s so low to the ice and he relies on his quickness, but his splits and going side-to-side and it’s hard to beat him unless you have a clean break or a tip. But you know, that’s–we faced a pretty good goalie in the third period.