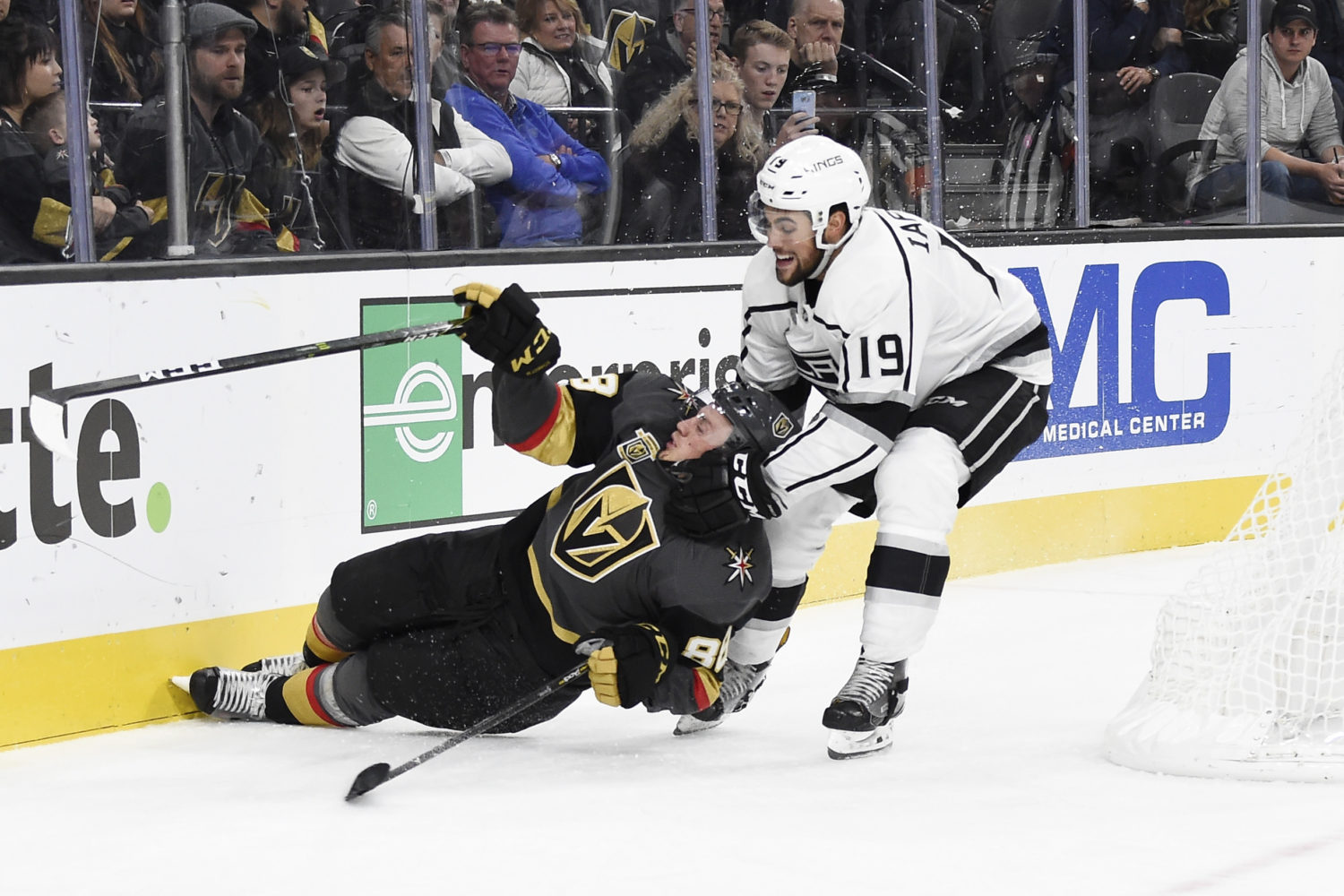 -A good afternoon to you from Las Vegas, Insiders. There was limited participation at this morning’s skate, with only Paul LaDue, Kevin Gravel and Andy Andreoff getting on the ice with Jack Campbell while the rest of the players worked out and kicked the soccer ball around. Because LaDue, Gravel and Andreoff didn’t play in a game the Kings won last night, there’s the raised possibility that John Stevens may go with the same 18 skaters. Campbell, for what it’s worth, did not stay on for any surplus of work. John Stevens is scheduled to speak with the media at 5:00 p.m. but politely declines to answer lineup questions, so there’s a good chance tonight’s starting goaltender will be learned by whoever leads the team out of the tunnel for warm-ups.

Campbell has made two career appearances, both against Anaheim. In a start for Dallas in 2013-14, he faced a 47-shot barrage and stopped 41 pucks in a 6-3 road loss; in 2016-17, he came on in relief of Peter Budaj to begin the third period and stopped all five shots he faced in a 4-0 home defeat.

-There are uncertainties across the ice, as well. Vegas did not hold a morning skate, so there’s no confirmation yet on whether Los Angeles will see Marc-Andre Fleury or Maxime Lagace. Both goalies have faced the Kings this season, with Lagace stopping 27-of-29 shots in the Golden Knights’ 4-2 win at T-Mobile Arena on November 19. Neither James Neal nor Oscar Lindberg finished last night’s game, with Head Coach Gerard Gallant telling reporters after Monday’s game that he wasn’t sure what their status was. “We’ll have them checked at home and we’ll see,” he said, as reported by the Las Vegas Review-Journal. Tomas Hyka, a 2012 Los Angeles sixth round draft pick, has apparently been recalled by Vegas, perhaps serving as an indicator that either Lindberg, or Neal, or even both won’t be able to play. Tomas Tatar, acquired Monday from Detroit, is expected to make his Golden Knights debut.

-Surprisingly, back-to-back home-and-road games are rare. The last time the Kings played on consecutive nights, with one game a home game and the other a road game, was November 16 and 17, 2011, when they swept Anaheim, winning 2-1 at home in a shootout on the first night and 5-3 on the road on the second.

Since then, the Kings have played five home-and-home sets on non-consecutive nights:

“This is what you want to play,” Alec Martinez said. “I guess the last time I think I really played something like this consistently was in college. The only thing is [the Kings] had a game a day or two before [last night’s game]. We weren’t sitting around all week.”

-It’s always special to watch a player score his first career NHL goal, and Paul LaDue was lucky enough to do it in front of his dad during the fathers trip. LA Kings Production caught up with the LaDues:

There was a recurring thought coming from several players at T-Mobile Arena this morning: Monday’s 3-2 overtime win over the Golden Knights felt like a playoff game at ice level.

“In a lot of ways, it was a playoff game,” Alec Martinez said. “Obviously, they’re sitting at the top of the conference and we’ve got to play desperate, and these are big points for us. They’re a really good hockey club. They play really fast. They’ve got a lot of depth, and they just keep coming at you and keep coming, no matter who’s out there. I think you saw that last night, but it was a hard-fought game. It was an emotional game, really physical at times, really fast at times. I think that’s kind of the game you would expect when two teams like that meet up.”

That bit about the Golden Knights always “coming at you” is a familiar observation of the terrific expansion club that has streaked its way to the top of the Western Conference under Gerard Gallant. Vegas is lightning quick on the counter attack and capable of turning shoddy puck management into fast transition in the other direction.

“I think you just need to check well,” Torrey Mitchell said. “We have to have a checking mentality, like a playoff mentality. If you give them any space, they’re going to take advantage of it, so if you check well, it’ll take away their time.”

Los Angeles was able to calm play down after a breathtakingly fast first period pace on Monday in which Vegas took an early lead on an odd-man rush that originated on a defensive zone faceoff.

“We talked about it after the first,” Mitchell said. “We can’t give them anything because they’ve got some skill guys and they can turn a little bit into a lot, and it just seemed like any time we gave the puck to them they were getting Grade-A scoring chances, so they got a lot of skill players and you’ve got to manage the puck properly, and we did that well in the second. And the third, we’ve sort of been a third period team all year. We did our thing in the third there.”

Even as the Kings continued to put their own DNA on the game, the Golden Knights were still stingy in their allowance of scoring opportunities from prime areas, and on Tuesday, Martinez broke down how the Golden Knights’ structure provides a unique challenge towards generating rush chances and quality looks on net.

Alec Martinez, on Vegas complicating zone entries:
Getting pucks in behind them is important. I think they sacrifice giving up the red to stop you at the blue, so obviously getting pucks behind is really important, but the thing is, you can get pucks behind all day, but if you don’t have any speed carrying through, then quite frankly, it’s pointless. I think that a lot of their o-zone play – I guess you could say this about any team – but a lot of their o-zone play begins in their own end. They transition probably the quickest out of any team that we’ve played against this year, and that’s both from D-to-offense, to offense-to-defense, and I think that’s the one thing they’ve been able to capitalize on, that they get it going the other way pretty quickly, and not in a cheating-type of cherry-picking aspect. It’s just they play fast, and whenever they see success in terms of a battle or something like that in their own end, then their guys are jumping. It’s certainly something that we have to be cognizant of and just reiterate the importance of good gaps on the D, having a good F3 and staying above their speed.

Martinez, on whether there are any templates that he’d compare the Golden Knights’ structure to:
I don’t think you can necessarily compare them to anyone. I think they have bits and pieces. If you think about it, the way their team is constructed, everyone came from every organization, so maybe that’s something they discussed. I think they’re kind of a hybrid between an eastern run-and-gun, generate-a -lot-off-the-rush team, but they also have a lot of western attributes, too. I think they’re a good combination, but I think the biggest thing is they play fast and they play a team game. I think that’s what really sets them apart is their work ethic and team game, and like I mentioned earlier, they just keep coming. It doesn’t matter which line it is, which D-pairing. I keep repeating myself, but they play very fast, especially here at home, so that’s something we have to be aware of.