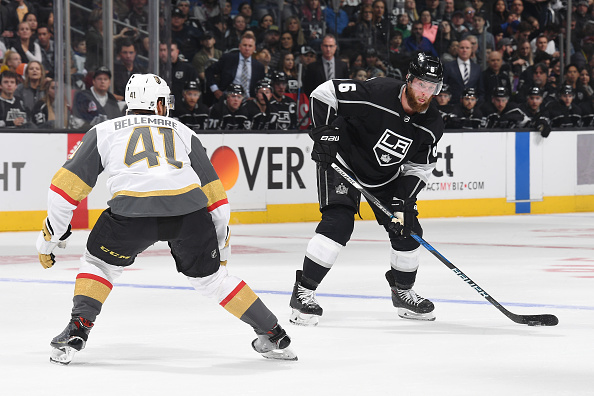 On the Golden Knights and when he realized they were for real:
It’s interesting because I think the hockey people, when they saw the rules for expansion, people were saying well before the expansion draft they thought Vegas was going to have a good team. I don’t think anybody, in their wildest expectations expected them to be as good as they are, but everybody thought they would have a good team and a real, competitive team right away – just the way the rules of expansion – we thought there were going to be a lot of really good players available and only one expansion team as opposed to two, more players exposed and I think the fact that they had a veteran guy in there (as general manager) with George, really good hockey people and obviously they did a great job. I think people knew before the fact that they thought they would have a good team. My first experience playing them was when we got back from China, we went in there for a preseason game and you could see right away. That team had an identity right way, you could tell they were playing fast, their team game was really strong and it’s only built from there.

On what the Kings need to do down the stretch to make the playoffs:
If had to say one thing, I’d say we’ve got to play faster. I think that’s just managing the puck. If there’s one thing that’s come up lately I think we can play faster with the puck. The other thing is just consistency. I think we’ve had really good starts to games, we’ve had really good parts to games and I would like to see us play a more consistent game and overall play faster with the puck.

On if the team is better set now for the stretch run after some trades:
We’ve got some veteran leadership in the locker room now with Thompson and Phaneuf coming in. Obviously Jeff Carter coming back in the fold. Rieder comes in, I think we have more depth. We’ve certainly added speed to our lineup with Carter and Rieder coming back in and I think Dion is a really good presence on the team. He’s got a really good personality and communicates really well. We’ve always said ‘when you talk, you’re faster.’ If you’re just waiting for visual confirmation, you become a little hesitant but when everybody talks you become a faster team. I think you’ve got guys here already – Drew talks a lot. You add another guy on the back-end that talks a lot, I think it becomes infectious.

On management showing commitment with adding via trade and if that has brought players’ games up:
We sure hope so. I think they brought in some really good people. We’ve added some good players that can help us and I think the players sense that. You never like to see people leave and move on, but I don’t think anybody can argue with the efforts that have been made to try to make us better and I think the players realize that.

On how he spends trade deadline day:
We have a two-game playoff series with Vegas. That’s all we’re worried about. Management does a great job with managing the team. We’re going to try and get our guys as ready as they can to win a hockey game tonight.

On if Vegas may be different in the playoffs:
They haven’t been different yet. I think they have a real identity to their team. I think there’s a real commitment in terms of how they want to play and I think they’re a very tough opponent. They’re well-coached. They have depth, experience – they’re a good team.

On if it may take a while for the team to be at its best as the new players mesh together:
Well there’s certainly some unfamiliarity. If you look at Vegas, their top three lines have barely changed unless they really had to and I think part of that is performance. Those guys have performed at the level they wanted them to so they haven’t even thought about moving them around but you hope it doesn’t take too long. The only thing I would say about this time of year is there’s not a lot of practice time so you don’t have the luxury like we had in January and (early) February when you had big breaks, coming out breaks where you could really spend time practicing and now it’s about preparation, review off the ice. When you have time to practice it’s important, but we don’t have the luxury of practice time from the All-Star break on. That is one challenge but at the same time, we’re not trying to reinvent the wheel. We’re just trying to play a good, fundamental sound game that’s not foreign to most of these guys. Though it’s going to take some time I don’t think it’s as hard as it maybe seems.

On if putting Adrian Kempe on the third-line has moved him away from some of the harder match-ups:
I don’t know. Adrian’s done a good job with that stuff all year. He has played against top guys all year, top pairings. He has probably more goals than a lot of people expected of him but it does give you some speed on all three lines. It gives you a threat on all three lines and we feel like we have a fourth-line now that can also contribute so if you look at Vegas, they play four lines, they play with pace, their shift-length is high-30s, low-40s and they come at you and we’re going to need all four lines and six D to be able to play with pace and especially with back-to-back games here, so it can only help you having depth we’ve added with health and additions.

On if Nate Thompson is on Kempe’s line for faceoff help:
He can help there for sure. (Thompson’s) been really good in the faceoff circle. (Mitchell’s) been really good in the faceoff circle. I think you’ve seen a lot of that now where it’s not just the centermen, the wingers have to be ready to take faceoffs and help, but certainly can help in that regard.

On Michael Amadio’s game:
We certainly think there’s upside there. He has a really good skillset. He has a touch and finesse offensively that I think is hard to teach. He scored 50 goals in junior and you can see why. He has a real calm and composure with the puck under pressure, which is good to see and he’s working on getting better without the puck, better in his own zone and all that stuff but he’s a real respectful kid that wants to learn, but I think he has a skillset that has a big upside.

On playing a team that starts well when the Kings struggle at starts:
Well you know what, (inaudible) I think we have to come out and play a real, sound team game where we manage the puck early. I think the key to all that is just managing the puck, not having self-inflicted wounds by not taking care of your own business. They’re going to create, they’re going to come at you with speed, they’re going to forecheck. We know that. We just have to make sure that we’re ready to play fast and the big thing for us is manage the hockey puck and play on top. I think when you play that way and you start the games that way, you say you have a good start it’s not the first shift, it’s the first period. It’s putting shifts together and every line going. That’s certainly going to be the focus, but they’ve been a terrific first period team all year especially at home. And our focus has been, all along, is to be ready. For whatever reason, there could be games this year where we’ve had outstanding first periods and then you give up a goal, whether we’ve had 5-on-3 power play situations, so maybe discipline’s a factor. Those are the situations that we have to take care of. Discipline is certainly something you can affect. Managing the puck is something you can affect and detail on every shift early in a hockey game is something you can affect. At the end of the day it comes down to preparation and being ready to play.