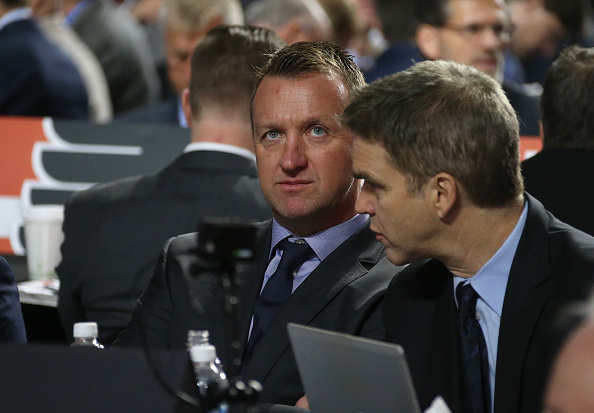 Kings General Manager Rob Blake said that he believes the team as constructed should push for the postseason and ultimately this was why he didn’t make a move on trade deadline day, Monday.

“We think we’re in a position here to compete for a playoff spot and that’s going to be up to these players now and we’ll go from there,” Blake said shortly after the noon deadline expired.

Blake noted that the return of forward Jeff Carter, who played in his first game since October on Saturday, should stabilize a lot of areas for the Kings.

Also, just because the Kings weren’t active on trade deadline day, doesn’t mean they didn’t make moves to shore up positions of need on their roster in the previous weeks. Los Angeles added defenseman Dion Phaneuf and forward Nate Thompson from the Ottawa Senators on Feb. 13 in exchange for forwards Marian Gaborik and Nick Shore. Last Wednesday, the Kings added speedy forward Tobias Rieder from the Arizona Coyotes along with goaltender Scott Wedgewood for goaltender Darcy Kuemper.

“I think we put a plan in place a few months ago. We wanted to acquire depth on defense. We wanted to make sure we took care of that. We wanted to get a little speed in our lineup up front and we did what we thought was there,” Blake said. “You come into today and you listen and different things and you kind of have your gameplan in place. Again that can get thrown out with different phone calls, but we were pretty content knowing what we had coming in here today.”

Blake had been adamant that it would take a lot for him to trade his first-round pick to add a current NHL player. He said if the right deal was in place it could have been an option, but such a pick was an asset he didn’t want to part with.

“I think we understand the value of that first-round (pick),” he said.

Monday was Blake’s first trade deadline day as Kings GM, and he said he came to the team offices at around 7:30 a.m., having already corresponded with other general managers on the East Coast.

“It’s they want to see what’s going on ‘are you hearing anything’ and different things,” Blake said. “If you had big players that were available I’m sure you’d field a lot more calls.”

Blake made sure to point out that he had faith in the team’s younger players, saying that forward Michael Amadio and defenseman Paul LaDue would likely be with the team the rest of the season.

“I think it’s safe to say Amadio and LaDue are here,” he said.

Now the key for the Kings is to focus on trying to get Carter along with their new faces to gel with the guys who had played a majority of the team’s schedule. And they have to do it quickly with a back-to-back, home-and-home against the Pacific Division leading Vegas Golden Knights set to start tonight at Staples Center at 7:30 p.m.

“It does take some time. I mean, if you put some of the new faces – you add Jeff into that mix and then you have Dion and Nate in there, you have Tobias Rieder in there, you have Jack Campbell in there as a new face in this lineup so yeah, there is a lot and we need to speed things up for sure,” Blake said. “We have one of the best teams in the league coming in tonight and tomorrow. We don’t have a lot of time to kind of tiptoe into that. We need to see it.”