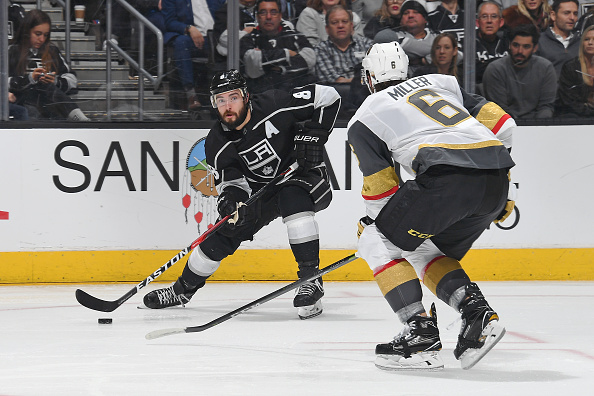 The Kings held a full morning skate in advance of their 7:30 p.m. home game against the Vegas Golden Knights and showed the following lines:

Goaltender Jonathan Quick was the first netminder off the ice, indicating he will start the front end of this back-to-back. Forward Andy Andreoff worked with Michael Amadio’s line on left wing, but stayed on the ice longer than most players, which would generally indicate he won’t play Monday.

The Kings have made several moves the last few weeks in adding Nate Thompson, Dion Phaneuf and Tobias Rieder and saw Jeff Carter come back from injury, which has led to players playing with different teammates than they had most of the year

According to the Kings, the key is to stay true to your game and not think about who you’re playing with. This should make the adjustment easier.

“It’s not really that hard to get to know a player. You know all the players around the league and if they come to our team, you kind of know what kind of player they are,” forward Adrian Kempe said. “Obviously you just want to keep playing your game and see what happens after that. It’s good to have some new guys here. They’ve been doing a solid job for us and they’ve helped us a lot and I think that’s important.”

– The Golden Knights were buyers at Monday’s trading deadline. The team acquired forward Tomas Tatar from the Detroit Red Wings for a 2018 first-round pick, a 2019 second-round and a 2021 third-round draft pick. They also got defenseman Philip Holm from the Vancouver Canucks for forward Brendan Leipsic.

Tatar reportedly may play in tomorrow’s home game for Vegas against the Kings, but not tonight’s in Los Angeles. Holm was assigned to the minors.

The expansion Golden Knights lead the Western Conference with 86 points and are one point behind the Tampa Bay Lightning for the most in the NHL.

“They’re all just hard workers, very responsible at both ends of the ice and they just play the team game the right way,” defenseman Drew Doughty said. “I think it’s just collectively having all those types of players on your team, kind of all the same types of players. I just think that makes your team game better, and that’s why they’ve been so successful really.”

The Golden Knights have scored the second-most goals in the Western Conference, and their high-scoring ways have a lot to do with their transition game.

– The Kings will host and honor the United States women’s Olympic hockey team, Monday at Staples Center. They will be saluted on the ice pre-game and also be featured in a special meet-and-greet with the LA Lions, the all-girls hockey club founded and operated by the Kings. The festivities will begin at 7:34 p.m.

Team USA beat Canada in a shootout at the 2018 Pyeongchang Olympics to win their first gold medal since 1998.