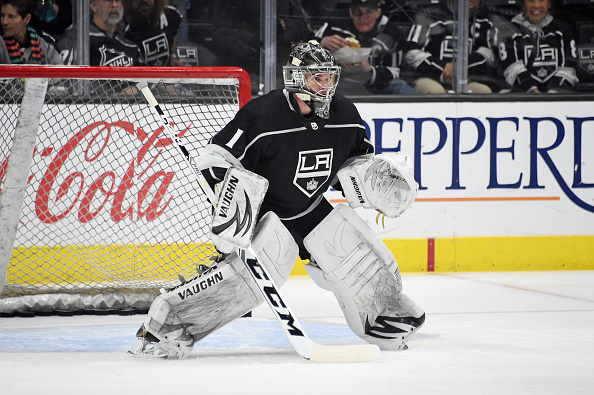 His thoughts on the trading deadline from a human perspective with his players:
I think it’s tough on the players only because, the guys are professionals. There’s always going to be distractions, there’s always going to be stuff going on off the ice, you can always have stuff in your personal lives, you’re always worried about your parents get older – there’s always stuff going on. I think as pros you have to learn to focus on the task at hand. I’ll never forget this. When I was coaching in Philadelphia and I met with the media, one of the first times, they asked me ‘is there anything you want from us’ I said ‘yeah, don’t just recklessly throw players’ names out there as speculation.’ That’s the one thing I guess that I don’t like. It’s the business we’re in, so it comes with the territory, so I get that. But players have families at home. Players have kids that go to school, players have people that care about them and they have to deal with these rumors. And a lot of them have no substance to them, but we’re all going to speculate ‘geez, how great would it be if so and so was moved to so and so’ or ‘if we got this guy for that guy …’ it’s kind of fun and exciting for the fans, and I guess it should be, but there are casualties with that type of banter, and that’s the one thing I don’t like. But it comes with the territory. We’re in pro sports, we’re in the public eye and that comes with it and that’s where the interest comes from, and I get it but I don’t like it. But it’s something we signed up for and I think the guys have learned over time as pros you have to learn how to deal with it.

On how far in advance he knows that a trade is being made and the communication on such topics from management:
I think in most instances you’re kept abreast of what they’re looking at. I think a lot of times we meet throughout the year constantly on your team ‘how does your team look? If you’re going to improve your team, how would you do it? How are certain guys fitting in? How are young guys coming along.’ We might see a player that’s a young guy that’s coming along that we see has a real good opportunity to move up and fill a hole in our hockey team and we know is going to do it in time, but management does a really good job of really being thorough in those assessments, but we’re usually kept abreast of what they’re thinking when we need to be kept abreast. We have to coach the players that are here and they have to look at the big picture for the organization, but just even the Phaneuf (trade) I think Phaneuf is somebody they’ve been interested in for a long time and felt he would be a good fit here. In terms of the details of the deal, they’re very good at that, way better than we are, in figuring out what the value is and what do you give up for the future and everything else. The communication is usually pretty good in terms of what they’re thinking and what might happen. And the timing is always different. It could be weeks and months ahead. It could be a few days ahead but I think the communication has been really good that there’s a little bit of transparency with what’s going on.

On if there areas he thinks need to be shored up on this team:
Not really I’ll be honest with you. My job is to coach. We believe the group in here is a group that’s capable of winning. I think there’s some production in our lineup that’s been a little bit missing that we need to help those guys become better players so they can help produce and play a 200-foot game but produce for us. I think we’ve shown at times this year that we have a team that when everybody’s playing up to their skillset, we’ve got depth at the goaltending position and we’ve certainly increased the depth with both acquisition and the development of young players at the defensive position and we’ve had some both additions and development of young players at the forward position that’s really increased the depth of our group. If you’re asking me as a coach right now, our biggest need is to improve from within.

On if there’s a sense of ‘this is our team now’:
Every day I show up to the rink ‘this is our team’ and that’s what you need to do. We’re not looking for help outside, we’re looking for help from within. It’s our job here to get the most out of our group and we think the group that’s here is capable of winning. I don’t look – anybody that’s here that’s here. Even guys that move on, the guys that were here, until they move on, were a big part of our team. Now that they’ve move on I wish them all the best and I’m a big fan of all of theirs, so I’ve always looked at the players that are healthy and able to play and ‘what can you do to give your team the best chance to win’

On what the team needs to improve on from last night, a 4-3 loss to the Edmonton Oilers:
I’d like to see us play a lot better in the neutral zone. I thought it was a big issue in our game. To go back to some of the games on the road, I thought we played really fast in the neutral zone. We moved pucks quickly. We worked back and then we had speed and support going forward and I thought last night we did a really poor job of that. I didn’t think we executed through the neutral zone very well. I don’t think we were thinking about getting forward pucks enough and I don’t think we were as organized in our support as we should have been and I think it really affected us in all three zones.

On if Jack Campbell will see some playing time with the tight schedule:
Yup. [Reporter: Full confidence in him?] Absolutely, no issue. I’m looking forward to getting him in.

On Paul LaDue and Kevin Gravel potentially getting some game action:
Not sure yet. Was actually going to sit down and talk about lineups this afternoon. Both will be considered for sure.

On Trevor Lewis’ status:
I’d still say he’s at least day-to-day. He hasn’t practiced with the team yet. He’s starting to do more on the ice in terms of what he’s able to do, which is a good sign and he’s feeling better and better, so he’s definitely getting closer but he’s not ready.