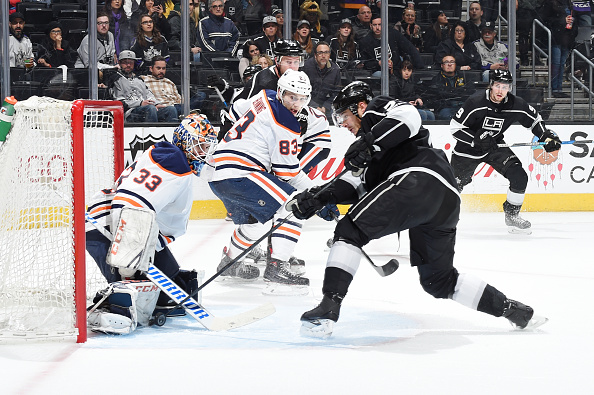 Below is the NHL’s explanation for a “no goal” call on forward Dustin Brown’s scoring chance at the 19:50 mark of the third period of Saturday’s game between the Kings and the Oilers.

An initial review of whether the puck crossed the goal line deemed the play a good goal, before it was reviewed for goaltender interference and then overturned. If the goal stood, the game would have been tied at 4-4. The Kings lost 4-3.

At 19:50 of the third period in the Oilers/Kings game, the Situation Room initiated a review under the terms of a Coach’s Challenge to review whether Los Angeles’ Dustin Brown interfered with Edmonton goaltender Cam Talbot prior to his goal.

After reviewing all available replays and consulting with NHL Hockey Operations staff, the Referee determined that Brown pushed Talbot’s pad and the puck across the goal line. According to Rule 78.5 (ix) “Apparent goals shall be disallowed by the Referee when a goaltender has been pushed into the net together with the puck after making a save.”

Brown believed the goal should have stood because the puck was loose when he jammed it past the goal line.

Kings Coach John Stevens also believed the play should have resulted in a goal for the Kings.

“There’s a loose puck sitting in the crease and he jams it in the net. I sure as heck would like to see it count as a goal. I think that’s just a good, hard hockey goal,” Stevens said.

The Oilers hoped they would get the call, but weren’t sure until the referee said the goal didn’t count. Sportnet’s Elliotte Friedman estimated Edmonton had lost 19 straight challenges before they won this review.

“I knew he pushed my pad over the goal line, but I mean you never know. I mean, that one could go either way,” Oilers goaltender Cam Talbot said. “When the puck’s loose and stuff like that, it’s not like I had it covered, so you never know if you’re going to get that call or not. So you know, we’re fortunate to get that one and get a big win.