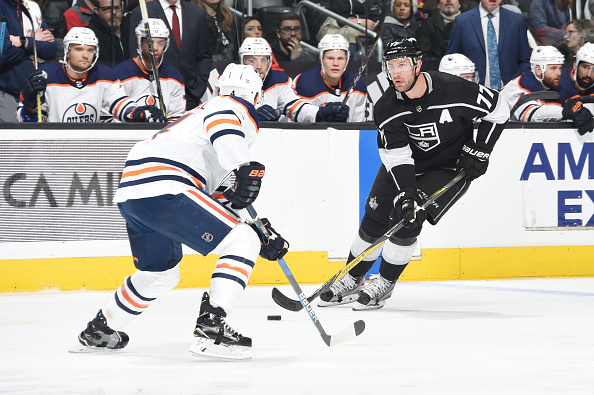 During the Kings 11 a.m. practice at Toyota Sports Center on Sunday, forward Trevor Lewis skated with backup goaltender Jack Campbell. They were the only two players on-ice. Coach John Stevens said Lewis was still “day-to-day” with an upper-body injury, but he was starting to do more. Lewis has been out since he went back and shoulder first into the boards after a hit from Jared McCann at the Florida Panthers on Feb. 9.

Forward Jeff Carter addressed reporters about his first game back, yesterday, since he suffered a cut on Oct. 18 that required surgery to repair a tendon in his ankle. Carter played 17:36 and fired four shots on goal while winning 69 percent of his faceoffs.

Carter seemed fine with his performance, but believed he could get better.

Carter sounded hopeful that he could get his timing back relatively quickly.

“I mean I don’t expect it to take too long. Hopefully it doesn’t anyways,” Carter said. “We have some work to do. I think it should be fairly quick.”

Hear the crowd's reaction to Jeff Carter in the face-off! 👏👏👏 @LAKings #GoKingsGo pic.twitter.com/TIujEcHnLj

– Tomorrow at noon (Pacific time) is the NHL’s trading deadline, which can be stressful for a lot of players as general managers shuffle around their rosters to prepare for the stretch run. Especially in today’s day and age with information easily accessible on players’ phones, it’s hard to tune out the noise for a lot of guys. According to some of the Kings’ veterans the key is to just focus on playing, which they know is easier said than done.

“Easiest thing to do is if you don’t want it to affect you, don’t read it. Stay off social media,” Carter said. “But with where we’re at right now in these times, it’s hard not to. Hard not to read it, hard not to see it but guys in there, it’s the way it is. It’s going be out there, names are going to be going around. You show up every day and do your job.”

Though the Kings have been active the last month – trading forwards Marian Gaborik and Nick Shore to the Ottawa Senators for defenseman Dion Phaneuf and forward Nate Thompson as well as dealing goaltender Darcy Kuemper to the Arizona Coyotes for forward Tobias Rieder and goaltender Scott Wedgewood – there’s not a looming sense of worry around the team going into the deadline that the team will look drastically different after noon. Thompson had that situation with the Senators, a team that seems to be selling most of its veteran assets right now.

“It was about coming to the rink every day and just coming in and being a professional,” Thompson said about his situation in Ottawa. “We’re professionals and we have to come in and do our jobs and go about it that way.”

Overall, it may be easier for the older players to not pay attention to rumors than younger players, who are more attached to their phones. The veterans acknowledge trying to tell the youngsters to not look at online media is a losing battle.

“That’s tough to do because the era has changed where that’s all they do is look at their phones,” Thompson joked. “I think it’s inevitable nowadays. There’s so much social media now and everyone has something to report that it’s hard to get away from it but I think you can tell them ‘don’t listen to what they’re saying.’ It just goes back to the clichés I think. You have to come to the rink, worry about your own job, come to work every day. It’s just like everyone else does.”

– Check out this behind-the-scenes look of when the Ontario Reign hosted Eisbaren Berlin for the International Frozen Friendly at Citizens Bank Arena in Ontario.

– Here’s where you can purchase tickets for next Saturday’s Tip-A-King event after the team’s 1 p.m. game against the Chicago Blackhawks. Tip-A-King allows fans to “tip” their favorite players for photos and autographs.