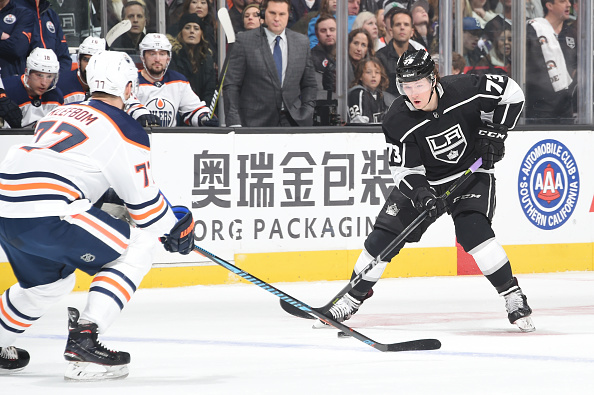 On the no-goal call near the end of the game:
I think the league is so confused that I’m confused, right? I don’t think they know what it is so how the hell are we supposed to know what it is, right? There’s a loose puck sitting in the crease and he jams it in the net. I sure as heck would like to see it count as a goal. I think that’s just a good, hard hockey goal. We saw a play before the game where the puck was jammed under the goalie’s pad and he drove the pad into the net. I get that, right? The goalie has to be allowed to make a save, but that puck was entirely loose, (Brown) hit the puck first and it goes in the net. I don’t know. I’ve tried to find (inaudible) to figure out what it is and what it isn’t. We’ve got documentation on the plays that have been challenged and the ones that have been allowed and I’m more confused now than when I started so I don’t have an answer but I think that was a goal, yes I did.

On what he said when he called the timeout after the goal was not allowed:
We made sure we got the clock right, so they didn’t have that right either, so we had to get that fixed and then we just wanted to try and gain the zone and get people through the net. I think it was nine seconds to get a play to the net and we did but now the faceoff’s in the neutral zone, there’s another uphill climb there. You need a lot of things to go right on that play with nine seconds left but they still got it to the net and still gave themselves a chance.

On Jeff Carter’s first game back after being out since October:
It was good to have him back. He has been out a long time. I thought he skated pretty well. I think his execution is going to get better over time but for being off that long off that amount of time I thought he did well.

On the turnovers in the first and second periods:
I didn’t think we moved the puck very well. I didn’t think we played very fast with the puck and I think it obviously cost us zone time and they gave up chances. That team is very good on the rush. It’s an area that we’ve been better at. I thought as the trip went on there in Winnipeg, it was something we did really well but did not do very well tonight and we’re going to have to get a lot better at it in a hurry.

On the challenges to find the right combinations with so many new players in the lineup:
There’s always going to be change. The guys get hurt during the year. Guys have been up and down. Guys come in and guys come out for different reasons. Those guys that came (inaudible) really helped us I thought. I think it gives us more depth up front. Having Jeff come back in we’re going to have to sort out and see what works but we still need more from a lot more guys. It’ll be a lot easier if you knew what you were getting from certain guys but we have to reboot here. You can look at the players you have and put skillsets in the right places provided they’re maximizing their skillset, it’s probably not that difficult but if guys are off or some guys are going, some guys are not going then the juggling act starts.