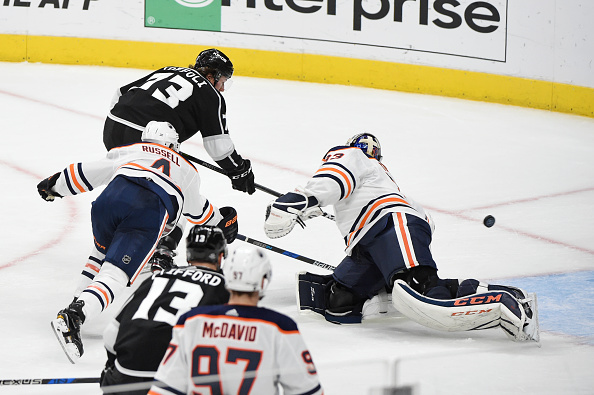 Dustin Brown, on what he was told on why his late goal didn’t count:
I wasn’t told what the call was but what did I see? I saw the puck was loose and I was hitting the puck in the net.

Brown, on the emotional swing of the goal counting and then not counting:
I mean, it goes from one extreme to the other. I knew it was in the net on the ice and then they challenge and again, goaltender interference comes up again.

Brown, on what was missing the first two periods for the Kings:
We have to find a way to play with desperation earlier in the game. That’s the difference

Brown, on if he thought it was goaltender interference:
No, the puck’s loose. If the puck’s trapped under his pad and you jam it in the net, I mean that’s been the standard. I’m hitting the puck in front of his pad. I don’t know, what am I supposed to do? I don’t know. It’s frustrating. Like I said, if the puck’s trapped under his pad and I jam his pad into the net, OK, I can live with that, right? But the puck’s not under his pad. It’s loose. I’m hitting the puck. Does my stick touch his pad, yeah? But the puck’s right there. I think – if we want more goals I mean we’re just, it’s a hockey game and we’re going to these, it’s frustrating. At the end of the day though we can’t wait til the last 10 seconds to score a goal like that, so but at the end of the day I think it’s a goal.

On the first two periods:
I mean, you look at the first period, they score first shift, we had a 5-on-3, 5-on-4. We weren’t very clean, weren’t very sharp so you have to be ready to go right from the beginning of the game.

Tyler Toffoli, on the explanation on why the late play was goaltender interference:
I don’t know. I don’t understand why that wouldn’t be a goal but they looked at it and it was their decision obviously.

Toffoli, on what he saw from the Kings in the last 20 minutes of the game:
We were playing desperate. It was good to see but we have to do that from the start and just play the full 60 minutes.

Toffoli, on the upcoming back-to-back against the Vegas Golden Knights and what the Kings need to clean up:
I think just tightening up defensively, trying not to give up as much and just keep playing in their zone. The more we play in the other teams’ zone the less we have to worry and makes it easier on ourselves.

On the return of Jeff Carter to the Kings’ lineup:
It was good. I think he was playing well and he had some minutes there and he was skating per usual and getting to the puck so I think the rest will come kind of when he starts playing more and feeling a little more comfortable out there.

Tobias Rieder on the late no-goal:
Well it’s crazy obviously. You can hear the fans cheering and then the fans booing so it was a tough call against us but that happens in hockey.

Rieder, on his emotions on the late call:
Like I said, we were all happy at one point and then all of a sudden they said it was no-goal and the game was over.