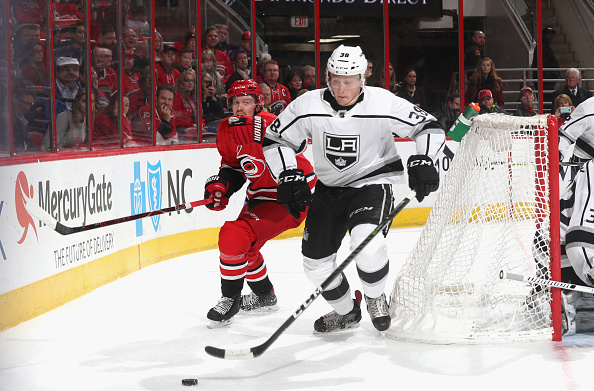 The Kings’ morning skate Saturday in advance of their 7 p.m. game against the Edmonton Oilers appeared to be optional, so there were no line rushes.

Jeff Carter did skate and Coach John Stevens said Carter “could be a game-time decision.” Carter has been out since October because of a deep cut that required surgery to repair a tendon in his ankle. This was his third practice since then.

Defenseman Paul LaDue rejoined the Kings at morning skate after being recalled from the Ontario Reign. Forward Jonny Brodzinski and newly acquired goaltender Scott Wedgewood were sent to Ontario.

Brodzinski had six points in 34 NHL games this season while LaDue had three points in seven games this year with the Kings. LaDue hasn’t played in the NHL since Feb. 13 against the Carolina Hurricanes.

Wedgewood was placed on waivers yesterday and cleared, which enabled the Kings to send him to the AHL.

– The Kings understand they need to find better traction at Staples Center if it wants to make the playoffs. A majority of the remainder of the Kings’ games will come at home and the team has gone 14-10-3 in Los Angeles this year.

The Kings lost 2-0 Thursday against the Dallas Stars in their first home game after a seven-game road-trip. In that contest the Kings fired 18 shots on goal, their second-lowest total of the season.

“I think we have to get back to throwing more pucks at the net. I don’t think we had many scoring chances in that Dallas game,” defenseman Derek Forbort said. “We’re not going to win many games scoring no goals, so I think getting back to that and then at the same time being our same selves defensively.”

The Kings have won 12 straight games against the Oilers on home ice.

– Saturday’s game will be broadcast nationally in Canada on Sportsnet as part of Hockey Night in Canada.

– The Kings will honor former defenseman Mark Hardy before the game as part of their Legends Night Series.

Hardy played 616 games with the Kings in two separate stints with the organization and notched 303 points.

Kings Team Ambassador and Hall of Fame broadcaster Bob Miller will be the M.C.