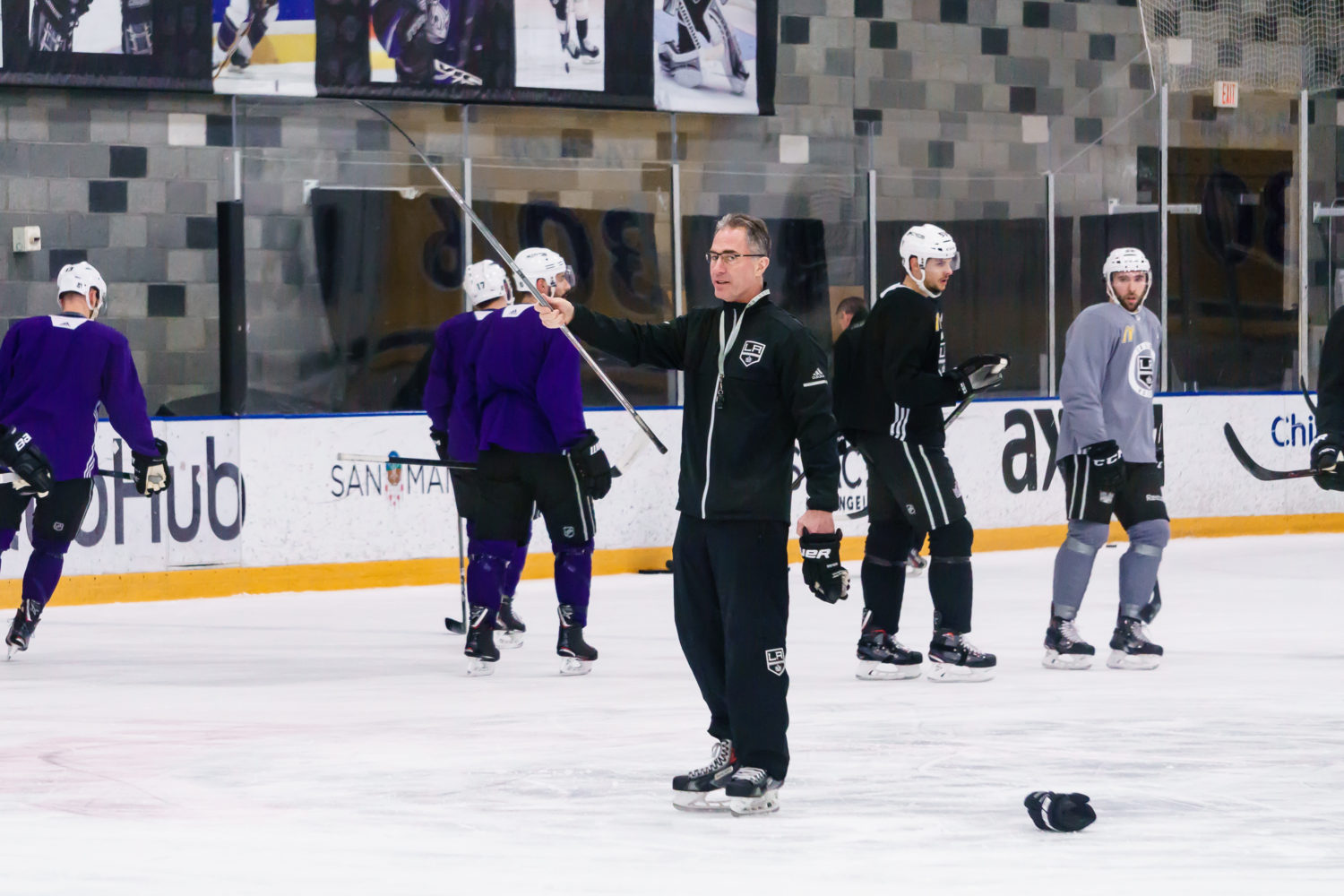 Kings Coach John Stevens addressed several topics with reporters after practice today. The two most prominent issues in his media session involved the status of forward Jeff Carter, who played on a line with Tyler Toffoli and Tanner Pearson, and his moving Tobias Rieder to a line with Dustin Brown and Anze Kopitar. Usually Alex Iafallo plays with Brown and Kopitar, but Friday, Iafallo played with a grouping of Michael Amadio, Adrian Kempe and Andy Andreoff.

Below is what Stevens said.

On if he can narrow down when we will see Jeff Carter in a game:
To narrow it down, probably not. It was great to see him today integrated in practice. Put him on a line so he could get lots of reps. That’s a really big step for him. He has really worked hard at his rehab and conditioning and it’s important to get some hockey reps in, so I haven’t talked to him after practice yet or (Chris Kingsley) other than watching him out there. It was great to see him with the team and I’ll touch base with (Kingsley) and the staff after, to see where he’s at.

On why he put Carter on a line with Tyler Toffoli and Tanner Pearson:
It’s one thing to get him on the ice, but he needs reps at his position, so we just – and our guys have had the ability to move around and guys have played lots of hockey lately so if guys were four on a line it’s not going to affect them the way it affects Jeff. Jeff needs reps. I thought it was great that he got on a line. I know he was looking to get on a line so he could get reps the way he normally does and that’s going to be the gauge of how he feels.

On how the communication process works with Carter’s recovery:
Well everything is geared through Chris Kingsley, our medical trainer and he would work with our team of performance people with John Meyer who has been overseeing all of his rehab as a therapist, Matt Price, his assistant Trent stayed behind and the work they did when we were away was tremendous. The difference in Jeff between when we left and came back is a real credit to Jeff and John and Trent – the work they did here, pretty remarkable how far he has come during our road-trip. Those guys all communicate with each other. Obviously one rehab medically to the point where he’s allowed to be fully functional and then (Kingsley) would be in close contact with John and (Price) to see where he’s at from a physiological standpoint and then obviously coaches are going to be there from a hockey standpoint. So there’s daily communication on where he’s at and then we’ll talk to the athlete. But as coaches we need to hear the word ‘go, good to go’ and then we’ll decide on a lineup.

On how Carter looked Friday at practice:
I thought he looked great. Jeff is a natural guy. His skating has always been very fluid and agile and I’ve been to see him many times over his rehab here. I know how hard he has worked, so he looked good. If you didn’t know he was an injured player you would probably have a tough time picking him out. He looked like he skated well. He looked like his timing was pretty good. He looked like he handled the puck well. Again, I haven’t talked to him but from my perspective he looked good.

On Tobias Rieder playing with Dustin Brown and Anze Kopitar at practice and if that’s a line that could stick tomorrow:
I don’t know. We don’t have a lot of practice time and he’s a new player here. We like his speed. We just thought we’d look at some different things knowing that Jeff was going to get reps on a line there. I think it was important everybody got reps out there. To me that’s an easy change but you don’t often get time to practice so we figured we’d throw him there and just see what his speed looked like there but we liked his speed last night as well so we haven’t made any lineup decisions yet.

On if Rieder came as advertised:
I don’t know him very well as a kid but a couple of his former coaches have reached out since we made the deal and speak very highly of him as an individual. He’s got good energy. We sat down with him and went over kind of like expectations, style of play. He was very attentive to all of that and in the game, I didn’t see any hesitation in his game. He seems to understand where he’s going to be. He looked like he was a responsible player. I thought he used his speed at time to really back them off. We’ve seen him lots in Arizona. I think he has played some of his best games against us so we certainly know what he’s capable of and I think he showed some of that last night.

On if Jack Campbell is going to get a long look as the team’s backup goaltender.
Yup, for sure. We think Jack’s terrific. I think the progress he has made since coming on board in the organization, he had a terrific year last year, really worked hard at his game. He is really, really a good teammate and I think his work ethic is really good and that allows him to get better quickly. He’s a very good student of the game. We haven’t seen a lot of him at the NHL level but he has played some preseason games and played very well. He’s a really good competitor and he’s going to get a chance to play.

On Adrian Kempe and Alex Iafallo playing together Friday and how they looked together and how them as a pair could play out:
I’m not sure. We had four guys on that line today so again, I think it was more about getting guys some reps in there. I’m not sure. Depending on – we have some decisions to make on who plays center too, right? (Mitchell) has played center and wing. (Thompson) can play center and wing. Adrian can play center and wing. Amadio has played center and wing so it was more about getting some good reps on a day of practice where we hadn’t had a lot. Again I’m being honest, we haven’t made any decisions on lineup yet. That’s something I’m going to get to this afternoon.

On if he has a status update on Trevor Lewis:
Only that he’s skating and doing a little more. He was able to shoot a little bit yesterday, which is a good sign. He looks good skating and it’s good he can get on the ice and keep his legs underneath him but it’s going to still be a little bit.

On having a lot of forwards and managing guys potentially not playing who are used to playing:
Our team is not just 20 guys. Our team is at least 23 guys on our roster. We decided to take Kyle Clifford out of our lineup the other night and it’s not easy to do. (Clifford’s) a great teammate and he’s all-in so I think we just make sure we communicate with the players and when the decision is made, the decision’s made. If it’s made because of performance we’ll tell the player that. If it’s made because of a coach’s decision on lineup, we’re going to tell the player that but sometimes a player comes out and there’s nothing wrong with his game, we just made a decision that somebody else was playing and sometimes a player comes out due to performance but we make sure that we communicate with the player that he is playing or is not playing and if it’s just a numbers thing, he knows that, but if there’s issues with performance, he knows that as well. [Reporter: Sometimes it’s just a match-up thing depending on who your opponent is?] You can only dress 20 and sometimes, I often look at – I was watching the Canadian Olympic Team and you have guys sitting out that are stars on their team. You have to make those decisions. When those decisions are hard it’s a good thing. That means you have tough decisions to make and quite honestly coming off that trip we’ve got some tough decisions to make. If Trevor’s healthy – we can make a case for a lot of guys who’ve played well. The Amadio line with Brodzinski and Andreoff had a good trip. (Clifford) has been a really solid, good soldier for us. You can look up and down our lineup and make a case, even Gravel who has been out of the lineup has come in and played some solid minutes for us and so has LaDue, so I think if you look at the stretch here, down the stretch drive we’re going to need depth up front. We’re going to need depth on defense and we’re going to need our backup goalie to win us some games so our message to them is we’re all in this together, and when your name is called, be ready.

On if he expected last night’s style of game — a physically grinding 2-0 win by the Dallas Stars over the Kings — this time of year:
Expect this time of year, expect from Dallas. What’s funny is we keep talking about analytics, they showed up number one or two in all the defensive analytics. They check tight, they don’t give up much. Even the game in Anaheim the night before, if you watched it, there wasn’t a lot of room out there. They actually check really well and Anaheim got a power play goal right away and I think it was an empty netter after that, so it was a really tight game and last night was as well. I thought we got off to a really good start, but their checking really kind of hemmed us in there. We made plays, but we weren’t able to make the next play to get through their checking and then it ended up being difficult to create anything offensively. It was a tight-checking affair, I think, on both sides. Those are the games where details make a difference. You ice a puck, you lose a faceoff, you don’t get in a lane and then the puck’s in the net. You always use the term ‘inches to get feet’ and every inch mattered last night and it ended up being the difference in their hockey game.