Jeff Carter on his return to practice, injury rehab and recovery 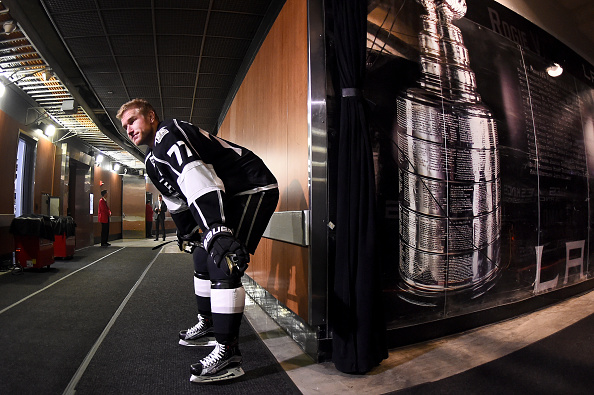 Forward Jeff Carter spoke with reporters today following his second full practice since he suffered a deep cut that required surgery to repair a tendon in his ankle in late October. Carter has played in six games all year. He played on a line with Tanner Pearson and Tyler Toffoli in practice. Coach John Stevens said he hadn’t talked to Carter yet, but listed Carter as “doubtful” for tomorrow’s game against the Edmonton Oilers — at least as of Friday’s media availability. Stevens said putting Carter with his long-time linemates in practice had more to do with getting Carter more reps.

Below is a transcript from Carter’s media session.

On what it’s like skating with the team again:
It’s nice. Pretty much sick of skating by myself so it was nice to get back out there with the guys and get into some actual hockey drills. It has been good.

On if he’s physically ready to get back into a game:
We’ll see

On how tough it has been to be not playing this whole time:
It’s never easy. Me personally, this is the longest that I’ve been out for any extended period of time. It was a new challenge for me I guess. Team-wise, nobody wants to sit out. Nobody wants to be out of the lineup for four and a half months. It has been a lot, sitting at home watching the games on the couch. I try to be around the guys as best as you can on practice days and what not, but you have to kind of let them do their thing and focus on what they have to do. It has been a long time.

On the difficulty of the rehab process:
It has been a lot with the rehab team, strength team and getting back on the ice. Been trying to get going. Luckily I’ve had a really good team with me. John Meyer’s group, (Chris Kingsley), (Myles Hirayama), (Trent Frey), (Matt Price), we’re pretty fortunate here that we have the group of guys that we have here to help us through injuries.

On if being an elite athlete helped with the speed of his recovery:
I don’t know if it was faster. With the nature of the injury we were pretty limited in what we could do at first. Really couldn’t do a whole lot until I got on the ice, I’ll put it that way and then it was building it up. I think everybody involved is all kind of happy with how it has progressed so we have some work to do though.

On if he can guess when he will return to a game:
No

Pearson said he hadn’t lost a step:
Yeah, it felt all right out there. Straight lines were pretty good.

On being back with Pearson and Toffoli
It’s always good. We’ve played a lot together. We’ve had some success together. It’s nice just to get out there with the guys.

On the final steps before he can return to game action:
I can skate in a straight line all day. There’s still some little stuff that has to be worked on and we’ll continue to do that.

On the new players on the Kings:
It’s exciting, I think starting with (Thompson) and Dion coming in since then, I think you can kind of see a little boost in the guys. I think when management goes out and makes trades like they have, it’s a sign to the players that they believe in the team and they think we can put something together. I think that in this room it gives the guys a boost and I think we’ve seen that.

On not being around the guys:
I was here as much as I could be and trying to catch up away from the rink and what not, so – never easy but you deal with it.

On being back yesterday:
It’s nice, it’s good. Like I said, I was sick of skating in circles by myself so it was nice to be out there with other hockey players and have a little fun.

On if he knew right away it was a serious injury:
I just thought I got cut. I went back to get stitches and they started looking around.

On when he knew it was more than just a cut:
When they started looking around.