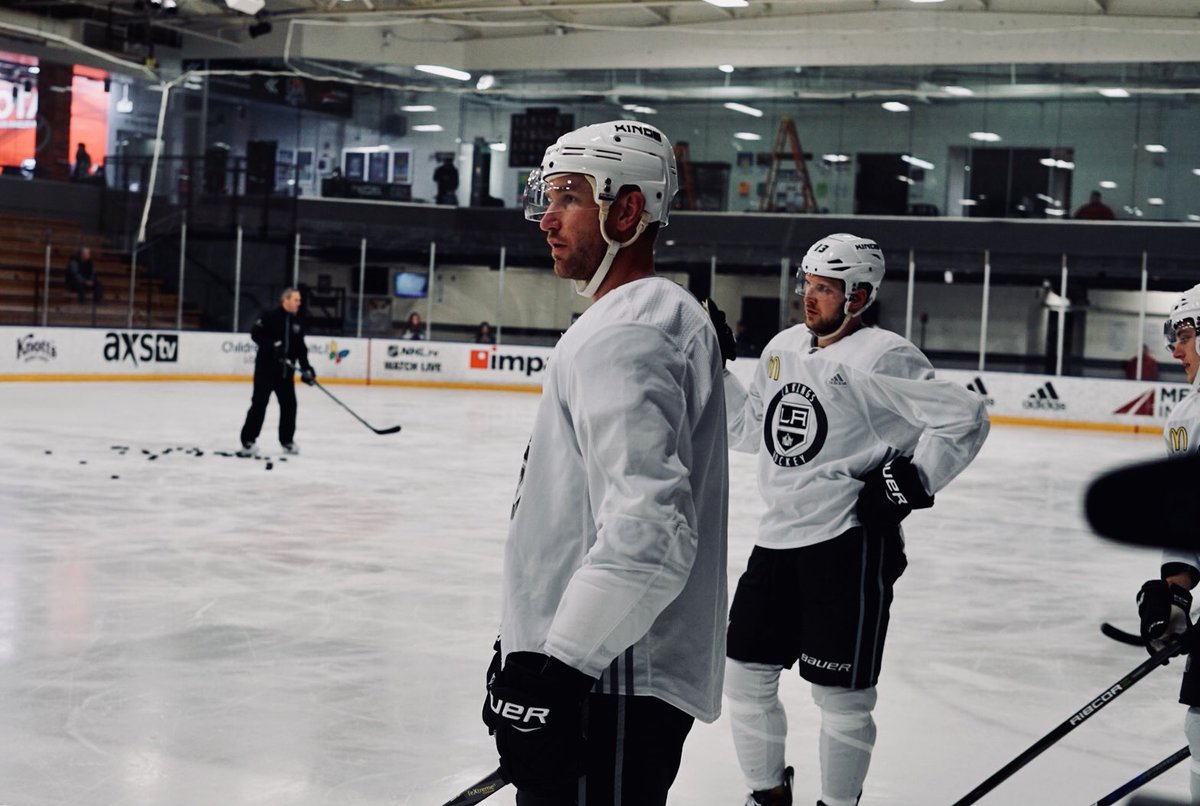 Below are quotes by Kings Coach John Stevens in advance of the team’s 7:30 p.m. home game against the Dallas Stars tonight. The order of the quotes has been shifted from how the actual interview went with Stevens’ comments about Jeff Carter’s status moved to the top because that seems to be the topic on most fans’ minds. I also moved up a quote on Trevor Lewis’ status.

Today’s morning skate was Carter’s first full practice with the Kings since he was injured in late October with a deep cut that required surgery to repair a tendon in his ankle. Lewis has been out since Feb. 9 with an upper-body injury. He skated on his own following practice.

On Jeff Carter and how many practices he needs before getting back into the lineup:
Not sure. Everybody’s different and Jeff is a little bit different in the sense that he’s a little more natural in his skating. If it was me I’d be feeling like I’m skating in quicksand for about two weeks. Jeff seems like he picks up his stride and I think the big thing was getting him fully functional and working hard at his conditioning. I think keeping him behind on the (seven-game road-trip) and working and getting the work he needed while we were away was absolutely the right thing to do and it’s amazing how far he has come since we left so it was great to see him in practice. He needs to get touches in practice. He needs to get contact in practice and we’ll just monitor him daily. So now that we’re home we can get him involved with the team. Not sure – I think from a physical standpoint he has made great strides. Now it’s from a hockey standpoint with timing and execution and a little bit of contact and then we’ll make a decision when he plays.

On if Carter is full contact:
I don’t really see any restrictions. I wouldn’t say he’s 100 percent full but we weren’t keeping an eye on any drills because we were worried about him. I think it’s time to get him involved and get his timing back. He has been out a long time. He has been out since October, so it’s time to get him involved in the team – get some timing back, touches. I mean the game is fast and he plays fast so we have to help him get his timing back.

On if there’s a status update on Trevor Lewis:
Only that he skated. He was out there skating with Jeff yesterday so he’s not the point where he can rejoin the team but he is on the ice keeping his skating legs up but he is limited in a lot things he can do at this point.

On the additions of Tobias Rieder and Scott Wedgewood from yesterday’s trade with the Arizona Coyotes for Darcy Kuemper:
I was talking to (Rieder) last night and said he has probably played his best games against us but he’s still a young kid that plays the game with a lot of speed. There’s guys that are fast and then there’s guys that are kind of in the upper level and I think he would be a guy that really carries a lot of speed at an upper level and thinks the game well. I did hear from some of his former coaches after we made the deal and they just raved about him as a kid and his 200-foot game. That’s kind of what we know about him. He has been a mid-teens scorer a few times so we think the addition of his speed and responsible game will be good for us.

On having more options on the wing with the addition of Rieder:
I was kind of waiting for you guys to kind of give me the lay of the land there. I think he’s probably more comfortable on left wing, but he’s played both. So I do think he gives you some options there but I think the fact that he comes in your lineup as a responsible guy – he has killed penalties before. He has given secondary scoring to the teams he has been on and he carries a lot of speed so he definitely makes us a deeper group up front.

On if Rieder will be in the lineup tonight against the Dallas Stars:
We really haven’t made any decisions on lineup to be honest with you. You guys kind of know my M.O. anyway but I’ll just tell you … Kuemper’s not playing tonight. We wish Darcy the best too because he’s just a terrific kid and played really well here and it’s a really good opportunity for him as well but we’re going to make decisions – if you look at the lineup with the schedule right now, you’re not going to get by with 12 (forwards) and six (defensemen). You’re going to need depth up front. You’re going to need depth on the back-end and you need two goalies to play so we’re going to try and utilize everybody. [Reporter: Are you going to carry three goalies for now?] For now, yup.

On if the guys the Kings have added the last couple of weeks all bring a certain type of character:
Well certainly the guys, I mean if we’re looking at the people brought in here lately, (Thompson’s) a real quality guy that’s a good team guy, plays a responsible game. Dion, we’ve talked about at length, has been great. The Rieder kid looks like that as well. I don’t know Wedgewood that well just because he has been in the minors mostly and come up a little bit but we think it’s important to add really good people to your team, not just good players, and we think the people we have here make the people we bring in better. We feel really good about the makings of our locker room and the kind of people we have and hopefully we’ve only enhanced that by the additions that we’ve made.

On carrying three goaltenders and what it means for the backup situation:
You know what, it’s just kind of all new. We haven’t really looked past adding players and we’ll work that out as it comes along. I think the big thing is, it doesn’t matter if it’s players or goalies, they get the work they need to stay ready. But we’ll sort through that as we move along here. The tough thing about this time of year is there isn’t a lot of practice time. You’re playing a lot of games. Rest is as important as work is right now, but we’ve got a staff that will sit down and look at that. (Bill Ranford) has done a great job with our goalies in all situations, making sure they’re ready to play and they’re getting better all the time and we’ll make sure that happens here.

On the front office making additions and giving the coaching staff support:
Well I think (Rob Blake) and his staff (Luc Robitaille), all those guys including the development staff in there in Ontario I think their efforts have been tremendous, not only trying to help us now but making sure that they have the eye on the future too. They understand contracts and next year after. Coaches understand today’s game, right? So we really rely on their expertise and they’re doing terrific. They’re trying to help us now but at the same time they’re making sure organization is in a position where you can continue to be better, so they’ve been terrific.

On integrating Rieder into the lineup at this later stage of the season:
Really first and foremost you want to get to know him. I think the relationship with trust is probably the first hurdle you need to cross. He needs to trust us and we need to trust him to get to know him a little bit – make sure he gets settled here in the area so that to get rid of any distractions. There’s a lot that goes on for these players when they’re forced to change cities and change organizations and then from that point on, we want to give him the information in terms of style of play and expectations but at the same time you don’t want him thinking too much and he becomes a hesitant player, so it was kind of good today. We had a pre-scout on Dallas and a lot of that has to do with us and then we’ll sit down with him and go over basically all three zones and make sure he doesn’t have any questions but he has played long enough and he has played against us long enough that we’re not trying to reinvent the wheel. I think we have a good fundamental foundation with how we want to play. I think he understands that. I think he has a good fundamental foundation as a player so I think the transition for him should be pretty easy.

On the play of Dion Phaneuf:
He has been terrific. He’s a veteran guy that’s come in and played like a veteran guy – been very respectful to the people that are here and I think he brings an edge to his game. Obviously he has put some points on the board, which has certainly helped us but helps him settle in but I just think he has a really well grounded game that can help you in a lot of different situations. He’s a physical player. He moves the puck well, he’s got a good stick, he’s got size. Every time he gets the puck offensively he goes to get it to the net and I think when he gets the puck, whether it’s breakout or transition he’s always looking to make a puck going forward. On top of all that he’s got a really lively personality, which I think is good for any team. It has been early but he has come in and checked a lot of boxes and played really well and has been a really welcome addition to our team