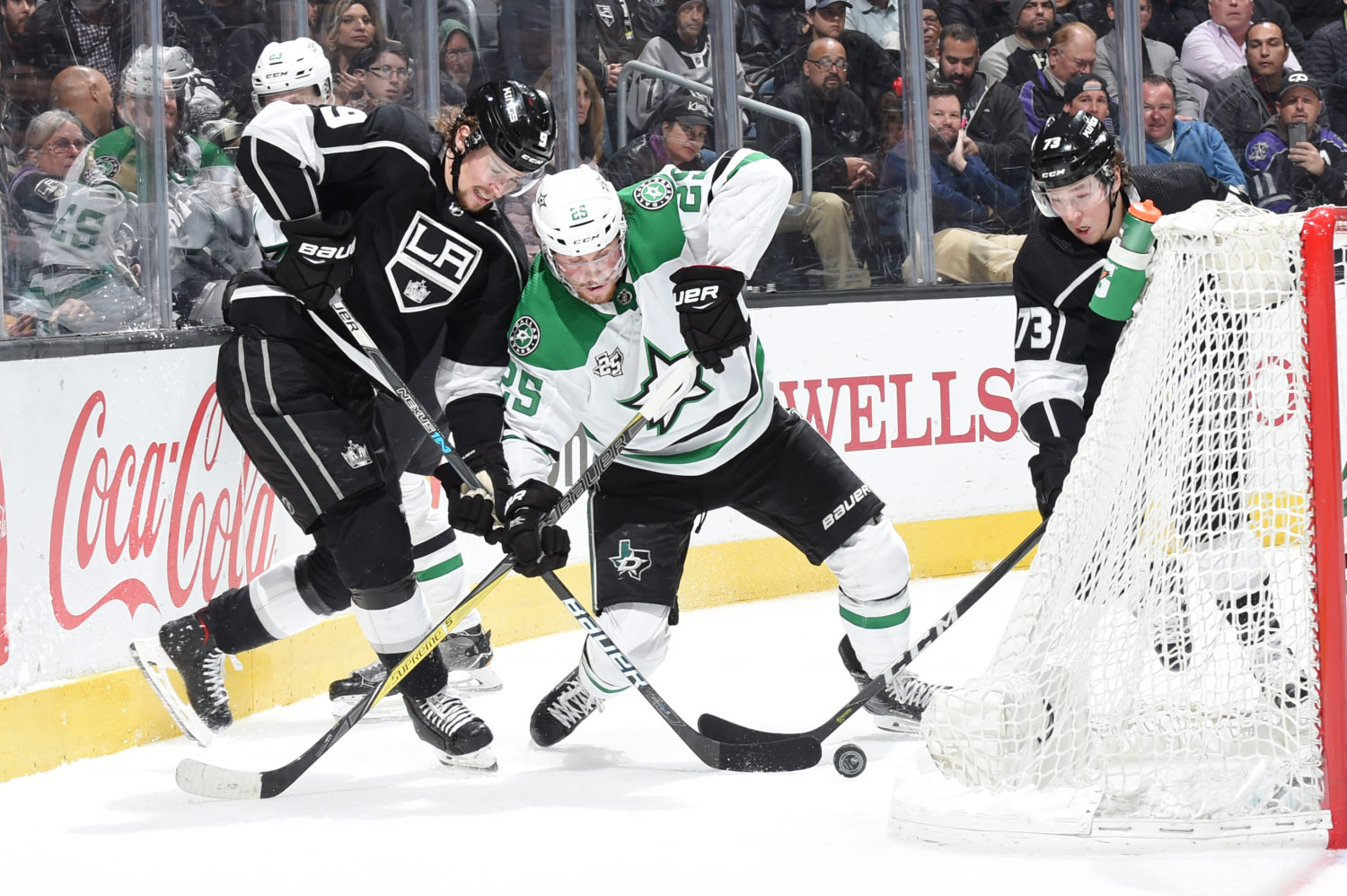 Ken Hitchcock, on the win:
Well, we’ve played so well the last two nights we needed to get rewarded. As well as we played tonight, we probably played better last night and we needed to start seeing rewards for this good play, and getting that goal just was a big relief for everybody. It freed up the tension that we’d been dealing with the last two games because since the third period in San Jose we’ve played awful well. We played great in the third period in San Jose, we played great the whole game in Anaheim, then played great again tonight. So it’s good for the players. It’s good validation that the way we’re asking them to play, they’re starting to enjoy it. And it’s hard hockey and it’s playoff-style hockey because quite frankly that’s what we’re in.

Hitchcock, on Tyler Seguin’s goal:
Well, I think what he’s doing is both him and Jamie are starting to take control of the hockey club, which is they’re taking control on the ice, they’re taking control in the locker room, on the bench. That’s good stuff. That’s what we need. I mean your best players at this time of year have to be your best players and tonight and last night we got good performances from our top guys. Moving forward, every team’s looking for that because it’s so darn hard right now at this time of year with so many teams involved in the West in the playoff race that every shift matters, every period matters, every game matters. And like I said, your best players are going to have to do the job for you.

Hitchcock, on staying mentally strong:
I think as a coach you’re standing on the bench and, you know, it’s turning. You just you can’t keep playing well and not start winning. And like I said, we played well for a little bit. On this road trip we really had a poor first period in San Jose and the rest of the time we’ve been fine. It’s tough to get the players to believe if you don’t win. After a while they start wondering and that’s why tonight’s win is really important because we’re asking them to play a different style than most of them have played and we’ve got to see success playing that way or it’s going to be tough on us. We’re not going to become believable. So it was nice. We went back to the way we played when we were winning all the close games and that’s the way we did it.

Hitchcock, on changing the lines and moving Roussel up:
I just thought Kopitar’s line had too big a bite in the game. Anze’s such a good player, Brown’s playing as well as I’ve ever seen him play. We just needed something to negate their bite in the game, their tempo, their puck movement. They were dangerous every shift. We needed something to turn the table and Roussel has the speed and tenacity to keep up and that’s why we made the change.

Hitchcock, on Lehtonen stepping up to the plate at big moments:
Again. So. Coach was a little smarter he’d probably play him more.

Tyler Seguin, on how he felt after scoring:
Great. You know, hard work pays off. I thought we hadn’t been playing the greatest. Last game we didn’t start great, but we played a heck of a second half of that game and I thought we deserved better. Tonight was another playoff-type game and was still waiting for that bounce. I’m happy it went it. I think we deserved it.

Seguin, on the importance of going home with a win:
It’s important. You know, you never want to look too far ahead or past the game you’re about to play, but we obviously know that we have the Winnipeg game at home coming up and that’s a heck of a test for us. We’re trending in the right direction and we want to keep that going and bring it home.

Seguin, on Lehtonen’s performance:
If you want to call it a back-up goalie, I think he’s been one of our best players all year. They’ve got a heck of a partnership, a tandem going on. It’s definitely more of a 1A, 1B than a one and a two. Every time he’s stepped in, he’s done a great job for us. Some nights you’re going to need that, for your goalie to kind of stand on his head early on in the game. You wouldn’t like that, but that’s another thing we’ve got to address, you know, our starts. Happy to get the first one tonight, but it’s been a problem for us the last ten to twelve games. But I thought Kari did a heck of a job for us tonight.

Greg Pateryn, on the play that led to Seguin’s goal:
Yeah, you know right before the faceoff Seguin came back for me and said, “Look for my stick if I win it to you.” He did a good job on draws all night and got it back to me and I basically just looked him right in the eyes and shot it right for his stick. I don’t know what part of it it even hit, but it doesn’t even matter.

Pateryn, on how important that goal was in getting the win:
I think it’s huge and I think it shows that our system and the way we work creates chances. That was just one opportunity that we had and that one was the one that went in. But you know, I thought it was a good step back in the right direction in showing that we’re able to create chances off of our forecheck and I think that was evident tonight.

Pateryn, on the challenge of playing a physical team like the Kings on the second night of a back-to-back:
Yeah, I think it can go either way. Sometimes it kind of gets you in the game earlier or a little more and I think that’s what it did tonight. So I think a lot of guys like playing that way so it worked out well for us.

Kari Lehtonen, on getting out-shot 8-2 in the first period:
Well, we got a couple penalties there and they got nothing scoring, but it was good for me to get things going and get a couple saves. I wasn’t really bothered what we were doing at the other end, but then in the second we took the game over and it was real nice for me after that. We really deserved the win I feel like.

Lehtonen, on the importance of getting the two points:
Oh it’s huge. Especially with the back-to-back. And we were the team that seemed to have more legs and more will at the end there and that was excellent. So I think we would’ve liked better fate last night, but that was that and we battled for the two points and got today’s.