Kings add Rieder and Wedgewood from Coyotes for Kuemper 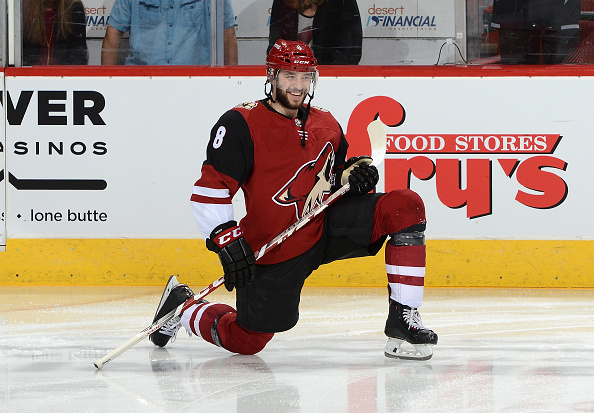 The Kings have traded for forward Tobias Rieder and goaltender Scott Wedgewood from the Arizona Coyotes in exchange for goaltender Darcy Kuemper.

The move for the 25-year-old Rieder helps add forward depth and speed on the wing for the Kings — positions of need for the team heading towards the Feb. 26 trade deadline. Rieder has eight goals and 11 assists in 58 games this year. Last season he set a career-high of 16 goals.

Rieder is in the final season of a two-year $4.45 million contract according to Cap Friendly. He will be a restricted free agent this summer. According to The Athletic’s Pierre LeBrun, the Coyotes will retain 15 percent of Rieder’s salary.

“We continue to look for opportunities to improve our team speed and Tobias will bring that dynamic to our club,” Kings General Manager Rob Blake said in a statement. “We appreciate Darcy Kuemper’s contributions this season as he has played very well for us in his role.”

Last week, Blake was asked about his approach at the trade deadline and noted he was looking for scoring, but didn’t want to mortgage Kings’ future. This move would classify as following that philosophy. This month Los Angeles previously added defenseman Dion Phaneuf and forward Nate Thompson from the Ottawa Senators in exchange for forwards Marian Gaborik and Nick Shore.

“Listen, we need to score goals and we have to find some offense. It’s not a secret. I’ve read it online. If something comes that is realistic – I’ve read the kind that quantify trades as a hockey trade or not, if it’s a hockey trade that makes sense, yes. If it’s a rental, no. We’re not in that market,” Blake said.

Kuemper was on a one-year, $650,000 contract signed last offseason and had a 2.10 goal-against average and .932 save percentage. He was 10-1-3 in 19 games played this season. According to TSN’s Bob McKenzie, Kuemper signed a two-year $3.7 million contract extension with the Coyotes. The 27-year-old Kuemper was a pending unrestricted free agent.

“Darcy is a big, talented goaltender who is having an excellent year,” Arizona General Manager John Chayka said in a statement. “You need great goaltending in this league in order to be successful and with Antti (Raanta) and Darcy, we are confident that we have an excellent tandem for the future.”

Both Rieder and Wedgewood are expected to be at the Kings’ Thursday morning skate in advance of the team’s 7:30 p.m. home game against the Dallas Stars.

This trade between the Kings and Coyotes the first transaction between the two clubs since March 9, 2006 when Los Angeles acquired Tim Jackman for Yanick Lehoux.