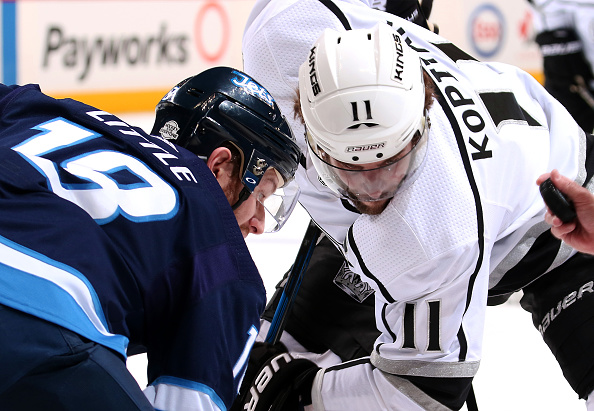 – The Kings improved to 15-6-7 all-time against the Winnipeg Jets organization with their 4-3 win. Los Angeles is also now 6-5-3 in Winnipeg.

– The Kings improved to 15-13-4 against the Western Conference and 7-4-1 against the Central Division.

– Los Angeles finished this seven-game road-trip with a 4-3-0 record. The Kings have won three games in a row.

– The Kings hold a 33-22-5 record and hold the final playoff spot in the Pacific Division with 71 points.

– Forward Torrey Mitchell scored his fifth goal of the season and his second goal in as many games. He finished the seven-game road-trip with three goals.

– Defenseman Dion Phaneuf scored his third goal with the Kings and second in as many games. Tuesday was his fourth game with Los Angeles. All of Phaneuf’s goals with the Kings have come on the power play. He played 18:19 on Tuesday.

– Defenseman Alec Martinez picked up a goal and an assist on the power play. His 11 power play points are tied for third on the Kings.

– Brown scored his 17th goal of the season and his third game-winner.

– Forward Tanner Pearson picked up an assist. It was his second point of the team’s trip.

– Forward Michael Amadio picked up an assist. He now has a three-game point streak. Over that stretch he’s had two goals and two assists.

– Forward Adrian Kempe notched two assists. It was his fifth multi-point game of the season.

– The Kings scored two power play goals against the Jets. It was the fifth time this season they had multiple tallies on the man-advantage.

– The Kings are off Wednesday. They will return to the ice Thursday at 10 a.m. for their morning skate at Toyota Sports Center in advance of their 7:30 p.m. game that night against the Dallas Stars at Staples Center.