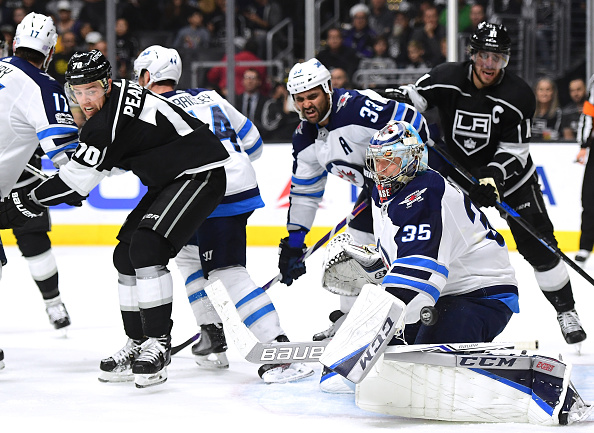 The Kings did not practice this morning since they have a back-to-back at the Winnipeg Jets tonight. Gametime is 5 p.m. Pacific. Hence I have no line rushes or lineup decisions to report at this time.

Los Angeles has been able to turn around their seven-game road-trip, in part, because the team has gotten off to better starts.

They’ve scored the first goal of the game in their last two contests and outscored their opponents 3-0 in the first period. This comes after allowing the first goal in every prior contest of the trip.

A strong start at the Jets on Tuesday is going to be a big test for the Kings. Winnipeg is in its last contest of a 10-game homestand and the Jets did not play yesterday, meaning they’ve had some time to wait and prepare for the Kings.

Winnipeg is also one of the best teams in the NHL – tied with the Nashville Predators for the top record in the Central Division. Los Angeles played yesterday at the Chicago Blackhawks and flew in early this morning for the back-to-back.

“When we look at it, we give ourselves a good chance when we have a good start and get the first goal and tonight’s no different,” Kings forward Tanner Pearson said. “We want to come out last game of the road-trip and we can finish off with a good record.”

The Kings are 3-3-0 on this trip and a win can give them some positive vibes moving forward, especially after starting this stretch away from home at 1-3-0. Overall, the team has played better since its 7-3 drubbing at the Carolina Hurricanes

“I think Carolina was a bit of a wakeup call for the road-trip and our game. After that, it turned in the right direction and the last two games we got the result we wanted,” Pearson said.

Though the Kings go home after this game the schedule won’t get any easier. They have a day off, then play against the Dallas Stars on Thursday, Edmonton Oilers on Saturday and Vegas Golden Knights on Monday. The Golden Knights game is the first of a back-to-back home-and-home situation.

“I think the whole thing is managing what you do away from the rink,” Pearson said in regards to preparing for the heavy upcoming schedule. “Obviously this is a back-to-back so, right after last game your focus kind of moves onto today’s game and that’s what, kind of, it has to be.”

The versatility of forward Torrey Mitchell has seemed to help him gain more of the trust of the Kings coaching staff.

The group seems comfortable putting the veteran forward at either wing or center, which has increased their match-up options. Recently Mitchell has found himself on right wing with Adrian Kempe and center and Pearson on the left.

“The more versatile you are, the more you can do I think the more ice-time you’ll get,” Mitchell said. “If you can play in as many situations as possible it’s better for you as a player. I’m on the wing right now. I’ve played wing before and I feel confident there.”

Mitchell’s best attribute is his defensive nature, so his goal in the Kings’ last game at the Chicago Blackhawks was a nice bonus. He has two on this trip so far.

“Obviously everyone wants to contribute offensively. It feels good and you feel good about your game. The last two or three games I’ve felt like I’ve created some chances so I feel confident in my game right now,” he said.

– Anze Kopitar is scheduled to play his 900th game Tuesday against the Jets.

– Here are Tweets of the Game from the Kings win over the Blackhawks.

– Former King Jarome Iginla is practicing with the Providence Bruins, looking to take another crack at the NHL. The 40-year-old winger, who had six goals in 19 games with Los Angeles last season after a trade from the Colorado Avalanche, reportedly had hip surgery about four months ago.

He lives in the Boston area.

4 months after hip surgery, Jarome Iginla on ice with @AHLBruins today. Iginla: 'I’d love to still play. This is kind of the 1st step, getting out here & seeing how it is… I wanted to see if I can still go. I don’t have any deals at this point' pic.twitter.com/LiWaOQfTzG